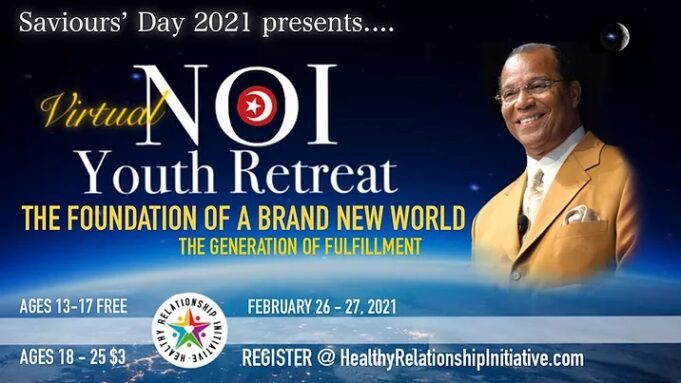 The Saviours’ Day Youth Retreat was just as powerful and uplifting as expected, and then some. Hundreds of participants from as young as 13 joined the first virtual youth convention February 26-27, created by youth, for youth.

The retreat started off with the workshop “Finding Your Musicality” featuring youth artists NuWorld and Goalden Chyld. Special guest, Student Minister Rasul Muhammad, a son of the Most Honorable Elijah Muhammad was thrilled to speak with the youth on the significance of music in the resurrection of the Black man and woman in North America and throughout the world.

“The greatest instrument that Allah (God) created is the human being, so when the Honorable Minister Louis Farrakhan said, ‘let the cultural revolution begin,’ that means that something has to be opposed. A change in the way we do things, in the way we think has to change,” he said.

“First, we must equip ourselves with knowledge, and then get into the science of how things operate, starting with the rhythm. … When we were in our mother’s womb, the five senses that were developed, the first sense is hearing.” Student Min. Rasul Muhammad added, that the best way to reach generations today is through love in the music.

In keeping the discussion interactive, participants asked questions of panelists and participated in a live freestyle session.

“I think Brother Rasul has powerful insight on music and its relationship to Allah (God) and the human being,” said participant Ayinde Muhammad, 22. “He mentioned that the greatest instrument of Allah is the human being, and I thought that was one of the best things ever. He also went on to talk about the way we do things, which originates in how we think has to change, in respect to the musical revolution that we are witnessing now with our people.”

She said, Brother Emmauel from NuWorld made a powerful point on the shift music can bring to nations.

Kushmir Muhammad, 14, said, “Brother Rasul has a very beautiful testimony. That was some very deep words I was hearing.”

He said he admired Student Min. Rasul Muhammad sharing from his childhood and how his mother, Sister Tynnetta Muhammad, inspired him to travel and learn the different languages of the world.

For those looking outside of music or not sure where to begin in expressing themselves, the workshop “Finding Your Purpose” followed shortly after. Panelists included Student Minister Abdul Hakeem Muhammad, European Region Representative of the Nation of Islam; Student Minister Kenya Muhammad from Chicago; online influencer and entrepreneur Brother Ben X; and fashionista Aneesa M.

“Through helping him and understanding what his purpose was, and be a champion for us, and to finally build a reality for ourselves, that to me was how I was formed and fashioned,” Student Min. Abdul Hakeem said about Min. Farrakhan.

Student Min. Abdul Hakeem Muhammad, based in the UK, has been a helper in spreading the Teachings of the Most Honorable Elijah Muhammad through the student ministry for decades.

“It’s important for us to understand that work and business is not separate in the Nation of Islam. In order to endure, you have to have big plans. … We have to appreciate that when the Savior came, he gave the Honorable Elijah Muhammad his purpose,” he shared with participants.

“It’s just important that when it comes to pursuing your goal, it’s going to be difficult [but] always getting through those pains and battles gets you closer.”

A shining star in the Student Ministry, Kenya Muhammad expressed her personal struggles in learning what her purpose is. “The power to release what is within starts with knowledge; 1) the knowledge of God; 2) the knowledge of self. … It all goes back to our connection, our relationship with Allah (God),” she shared.

“The first thing I would say like that, is that it’s important to find someone who has the same underlying mission. All of the things of good that I do, my husband is encouraging me in that. … If your friends are never going to tell you when you’re messing up or when you’re doing things that’s not good, that’s not a friend,” she pointed out.

“Check the motive of what you’re doing; that will tell you the difference of it,” he said. “Yes, it is possible to take on the wrong purpose; so, back when I used to play basketball, I used to say that was my purpose. … You can be acting in something that isn’t in your purpose. The best question we can ask, I heard the Minister say, is ‘why?’” he said.

“If you don’t know your destination, you won’t know the direction. … I would say you have to one, go in and ask yourself ‘what is my mission?’” the young entrepreneur added.

Aneesa Muhammad, a fashion influencer on social media said, “The thing about your purpose is that, it’s going to be difficult, but I felt compelled. … I knew that fashion was something that I wanted to do and fashion was always something that I liked, and I saw sisters were struggling to put a piece together. …

“If what you are doing, you are accepting your own and being yourself and expressing your Islam and how you want to move forward with that, if it’s being a righteous Muslim, who cares?” she added.

The Friday portion of the retreat concluded with a two-part workshop called “Healthy Relationships” that offered guidance for youth as young as 13 in maintaining healthy relationships with friends and family. A separate segment focused on courtship and marriage for young adults ages 18-25

“Your standard is that you’re looking for someone you can call your friend,” said Student Minister Nuri Muhammad. “Does their conversation with you add knowledge to you? Does their actions remind you of the Hereafter?” he asked.

“The beauty of obedience— and I’m only putting it before patience—is because being obedient is what’s going to allow us to be patient. Patience is not a trait or characteristic we are born with, it’s something we have to build and acquire over time. … The truth is obedience is not the product of understanding. Understanding is really the fruit of obedience.” Min. Nuri’s words resonated with many of the youth.

“I think that this workshop is fantastic, it’s great that those who are too old for the Children’s Village, but too young for the Sneakers Ball have somewhere to go,” said West Muhammad, 13.

Salahuddin Saafir, 15, said, “Being able to directly speak and converse with Bro. Nuri along with peers and fellow brothers and sisters is very rejuvenating and electrifying.”

The second segment was full of helpful advice for courting and married couples and those seeking to know more about courtship.

“You have to ask questions and get to know this person as much as you can. Communication was key, asking the right questions,” shared Aeisha Muhammad.

The youth retreat concluded Feb. 27 with a “Defending Farrakhan” workshop. Panelists included Demetric Muhammad, Nzinga Muhammad, Anisah Muhammad, Ilia Rashad Muhammad and Kareem Muhammad. The purpose of the workshop was to build a better defense against those who oppose the Minister. The workshop included guidance on properly using social media and other mediums.

Student Minister Ishmael Muhammad, National Assistant to Min. Farrakhan shared inspiring words with youth participants and encouraged them to use their gifts in the mission of resurrecting the Black man and woman.