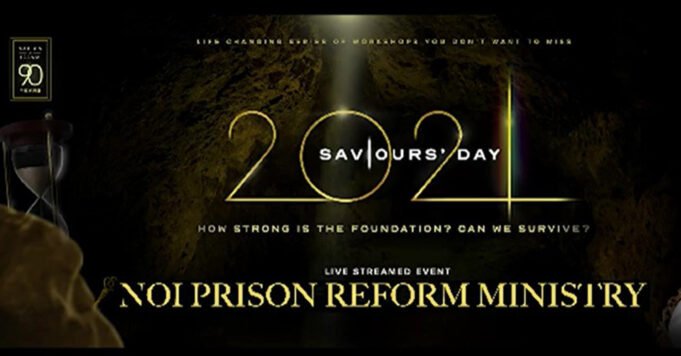 CHICAGO—The experiences of the Nation of Islam Prison Reform Ministry and those who have benefitted from the courage and sacrifice of those locked away were on full display during the Saviours’ Day 2021 virtual workshop.

In each case, these men who served time behind bars and serve others still behind bars, shared how the light of Islam changed their lives, improved the lives of others and freed them before their release from prison. Once they accepted the Teachings of the Hon. Elijah Muhammad under the leadership of the Honorable Minister Louis Farrakhan, it was only a matter of time before their change in mind, heart and faith resulted in changes and release from prison.

But their success was rooted in those who came before them and who didn’t have much formal education but dedicated themselves to toil in prison libraries to master legal language and successfully fight the right to practice their faith inside American penal institutions, said Abdullah Muhammad.

Their noble cause didn’t exempt them from persecution and trial as each shared how they were often put on lockdown and isolated from others as they grew in knowledge and tried to bring inmates into the light of Islam and better people’s lives.

We were punished for wanting to read, wanting to study and wanting to be better, not because we did wrong, but were doing right, said Troy Muhammad, who was a teenager when he was locked away and saw Min. Farrakhan in a television appearance. It changed his life.

For Gregory Muhammad in the late 1970s repeating chants he heard the Fruit of Islam shouting as a teenager drew attention as he was jogging in a Pennsylvania prison yard. He was told the Nation of Islam was back and being rebuilt by Min. Farrakhan. A transfer to another institution brought him into contact with more information.

He left one Islamic community to come to the Nation. Later he became in charge of the Muslim men and then a study group leader in prison. And, he successfully fought and reasserted previously won rights to practice his faith. When offered a settlement based on a grievance he filed, he consulted with Min.

Farrakhan and accepted the settlement inside the prison. He took no monetary damages because the Nation would not accept government money. But the long fight ended with authorities recognizing the Nation of Islam’s right to religious services, to observe Ramadan in December at that time, to receive The Final Call newspaper, to Eid feast celebrations and everything other religious groups were afforded.

Later, in another institution he challenged those who were running criminal enterprises under the guise of religious services for the Nation of Islam. He told those involved you cannot use the teachings of the Hon. Elijah Muhammad, which came to clean us up, to do evil. Min. Farrakhan guided him on how to handle the serious situation and Abdullah Muhammad came to the prison.

After hearing one of the wrongdoers speak, he directed Gregory Muhammad to have the man sit down and be quiet. Abdullah Muhammad then went to the prison chaplain and said nothing must happen to Gregory Muhammad as there was talk of killing him in the prison. Nothing happened and the group of hypocrites was eventually shut down.

Lionel Muhammad, who works with Abdullah Muhammad in Chicago, served a long sentence for a crime he did not commit. But that sentence served him and others as he started NOI study groups in seven institutions behind the walls and helped establish two others once free. He thanked Abdullah Muhammad for serving him while incarcerated.

Though exposed to Islam by an uncle, in 1978 during an Illinois prison lockdown, he began to reflect on his life. A fellow inmate asked if he “heard about Farrakhan?” Suspicious he said no and sarcastically asked if “Farrakhan” could get him out of prison? He might, the other inmate replied. That stoked his curiosity and he eventually asked his father for a book, “Message to the Black Man,” by the Honorable Elijah Muhammad.

The prison refused to allow the book in twice. With the prison on lockdown, he wrote the chaplain about the book and was denied. He connected with the late Al Salahuddin, who was legendary for helping inmates, asking for help. One day prison officials brought him in and gave him the book with a caution: if he made trouble with that book, he would be put in isolation.

He wondered why the warden threatened him for wanting to read a book but read he did. He completed the book three times and memorized the chapter on “Who is That Mystery God?”

The Hon. Elijah Muhammad’s declaration in the book that the message was not for cowards resonated with him.

He eventually was out of lockdown and invited to a jumu’ah, congregation prayer service, at a prison and didn’t like nor understand why the imam was disrespectful of the Minister and the Hon. Elijah Muhammad, when the Nation of Islam patriarch had brought Islam to Black people. He asked that question, later he came back and told the same imam he could not come into the prison and disrespect these two men. There were a couple hundred people at the prayer service. He would not allow the imam to do so. The imam apologized and ended the disrespect.

Brother Al Salahuddin, and Barney Muhammad in Chicago kept feeding him literature. He wrote to officially join the Nation of Islam in the early 1980s and then finally heard the Minister’s voice on audiotape.

He also fought for the right to practice the Teachings of the Hon. Elijah Muhammad and won. But he also spent two years in isolation because prison authorities didn’t want the Teachings to spread. It was his “greatest blessing” as he had a single issue of The Final Call and memorized it. A change in prison administration led to his release and continued work with Abdullah Muhammad and the propagation of his faith.

Troy Muhammad leads the city where the Nation of Islam started and the mayor, the police chief and another official whose names were on his court papers in his pre-Islamic days now call him for help and answers as the representative of Min. Farrakhan.

He was incarcerated for a serious crime but heard a divine word and turned his life around.

Our experiences help people in physical prisons and prisons of self-hatred, loneliness, ignorance and neglect, he said. In Michigan, Troy Muhammad continued, the mosque has donated 20,000 masks because the prisons fail to give out necessary PPE to those crowded behind bars and unable to see loved ones.

When he accepted Islam in prison and the Muslims started to grow, 100, 150 strong, he and others were put in maximum security facilities.

But in his new cell, wrapped in a mattress, was a Holy Qur’an translated by Maulana Muhammad Ali and preferred by the Nation of Islam. We plan, they plan, but Allah is the best of planners, said Troy Muhammad.

With Abdullah Muhammad, who has spent several decades crisscrossing the country and serving these men and others, male and female, and the panelists the foundation is faith in Allah (God). With that firm foundation, we cannot lose and we have all we need to survive, they said.