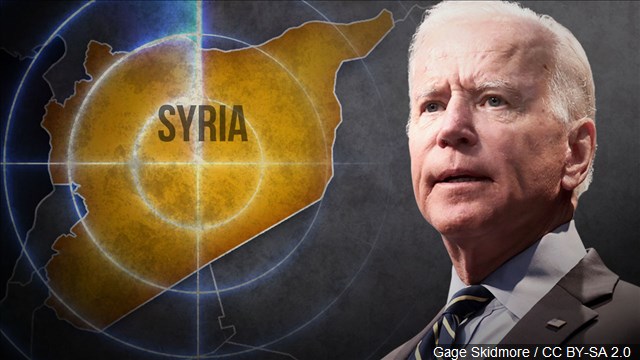 Damascus has censured the U.S. air raid against positions of Iraqi counter-terrorism forces on the Iraqi-Syrian border, which killed one and wounded four others, describing it as a “bad sign” from the administration of new U.S. President Joe Biden.

In a statement carried by the official SANA news agency on Feb. 26, the Syrian Foreign Ministry said the Arab country “strongly condemns the American act of aggression” in the early hours of the day on facilities used by forces of Iraq’s Popular Mobilization Units (PMU)—better known as Hashd al-Sha’abi—at a border point in Syria’s eastern Day al-Zawr Province.

“In a flagrant violation of the rules of international law and Charter of the United Nations, the U.S. warplanes on, February 25 launched a coward [act of] aggression by bombing some areas in Day al-Zawr Province near the Syrian-Iraqi borders,” it said.

“It is a bad sign regarding the policies of the new U.S. administration which should adhere to international” norms, the statement added.

The military action, the first of its kind under U.S. President Joe Biden, has been met with a negative reaction, with many observers likening Biden’s approach to that of his hawkish predecessor, Donald Trump.

Iraqi resistance forces have been fighting remnants of the Takfiri Daesh terror group across border regions of Iraq and Syria in coordination with the governments in both Arab countries.

An informed source told Press TV that one person had lost his life and four others had been injured in the U.S. military’s act of aggression.

In a statement issued after the assault, Pentagon spokesman John Kirby said the raid authorized by Biden had been “deliberate” and meant to “de-escalate the overall situation in both eastern Syria and Iraq.”

The U.S. Secretary of Defense also thanked Baghdad for helping with what he called intelligence input, in a claim that “surprised” the Iraqi government.

The Iraqi Defense Ministry denied the claim in a statement and said Baghdad’s cooperation with the U.S.-led military coalition is restricted to fighting terrorism and averting threats against Iraq in a way that the country’s sovereignty and territorial integrity would remain unharmed.

The military action was said to be in retaliation for recent attacks against American bases and missions in Iraq, which Washington has blamed on so-called “Iran-backed” Iraqi resistance groups.

In the latest such attacks, Rockets hit Baghdad’s Green Zone, which houses the U.S. embassy and other missions, on Feb. 22. The American military base at Erbil International had similarly been attacked days earlier.

Pro-Western media outlets described the U.S. air raid on the Iraq-Syria border as a “signal” to Iran, which is claimed by Washington to be using Iraq’s Hashd al-Sha’abi as a “proxy” force in the neighboring country.

Iran has repeatedly rejected any role in the attacks targeting American bases in Iraq.

Reacting to the mid-February rocket attack on the U.S. base in Erbil, Iranian Foreign Ministry spokesman Saeed Khatibzadeh rejected “suspicious” attempts to tie Tehran to that raid.

“Iran views Iraq’s security and stability as crucial to the region and other neighbors, and rejects any action that disrupts peace and calm in this country,” he said back then.

There has been a sharp rise in attacks on U.S. bases and diplomatic missions in Iraq since early last year, after the Iraqi Parliament passed a law urging the withdrawal of U.S. forces from Iraq amid widespread anger over Washington’s assassination of top Iranian anti-terror commander Lieutenant General Qassem Soleimani and Deputy PMU commander Abu Mahdi al-Muhandis on Iraqi soil.

The Americans try to link the raids on their positions to Tehran’s pledge of harsh revenge for General Soleimani’s murder. The Islamic Republic, however, says it will not hide its act of revenge whenever it decides to go for it, just like what it did in the case of the retaliatory missile raid on the U.S.-run Ain al-Assad Air Base in western Iraq.

Analysts say the attacks on U.S. positions in Iraq, which usually cause almost no damage to the targets, are meant to serve as a pretext for the U.S. to keep its forces in the Arab country.

In turn, Faiz al-Ahmed, the head of the Syrian Parliament’s Committee on National Security, severely condemned the U.S. airstrike, which targeted the positions of the Syrian army and its allied forces.

“What just happened is highly dangerous,” the senior lawmaker told Iran’s Tasnim news agency. “Washington is keeping up its act of aggression” to advance the interests of the regime in Israel.

The attack, he added, “will not undermine the iron resolve of Syria and its allies to drive American occupiers out of the Syrian soil,” but will rather “strengthen the Syrian nation’s determination to strengthen its role in the resistance axis to confront the West and global arrogance.”

The two sides emphasized the need for the Western countries to abide by UN Security Council resolutions regarding Syria.

Zarif reaffirmed Iran’s support for the Syrian nation in its efforts to rid the country of militant groups, many of which have the support of the U.S. military in their campaign of destruction.

‘This is nothing!’ Lavrov says U.S. notified Russia few minutes in advance

Meanwhile, Foreign Minister Segei Lavrov of Russia, an ally of Syria, said on February 26 that the United States had notified Moscow of the impending attack on the PMU facility “four or five minutes ahead of time.”

“Our military was warned four or five minutes ahead of time. Of course, even if we are talking about deconfliction, as is customary in ties between Russian and U.S. military personnel, this is nothing! This was a kind of notification when the strike was already being carried out,” Lavrov said.

The Russian foreign minister said the U.S. military is present on Syrian soil “illegally, in violation of all norms of international law, including Security Council Resolutions on reconciliation in the Syrian Arab Republic.”

He said Russia had received unconfirmed information that the U.S. is planning to stay in Syria indefinitely.

“We have recently received different information from various sources. We cannot confirm it for now, and want to ask the Americans about this directly. Supposedly, they are making the decision to never leave Syria, even to the point of destroying this country,” Lavrov said.

China: Syria’s sovereignty must be respected

Meanwhile, the Chinese Foreign Ministry also reacted the U.S. air raid, warning against any action that further complicates the situation in crisis-hit Syria.

Tanf base, a safe haven for Daesh

The U.S. began its military intervention in Syria with the emergence of Daesh (ISIS) in 2014, when Washington and its allies formed a military coalition under the pretext of fighting the Takfiri terror group.

In parallel, Washington also deployed its own forces and equipment in Syria as part of unilateral “anti-terror campaign.”

The U.S. and its allies did nothing to uproot Daesh and even worked on many occasions to hinder Syrian army operations—which were backed by Iran and Russia—against the terror group.

Daesh suffered defeat in the Arab country in late 2017, but the U.S. refused to end its unlawful military presence—which has neither a UN authorization nor the Damascus government’s consent. Washington even began to strengthen its foothold in the eastern and north eastern parts of Syria, which are rich in oil.

Dayr al-Zawr Province—where a large part of Syria’s oil reserves is located—currently hosts America’s most notorious military base in the Arab country, which is widely reported to be used by Washington to train the remnants of Daesh and other militant outfits operating against the Syrian governments.

The U.S.-controlled region also serves as a safe route for Daesh terrorists to freely move across the border from Syria into Iraq and vice versa.

Russia once said Tanf had become a “black hole” which Daesh terrorists use to carry out attacks against Syrian troops and civilians. (PressTV.com)