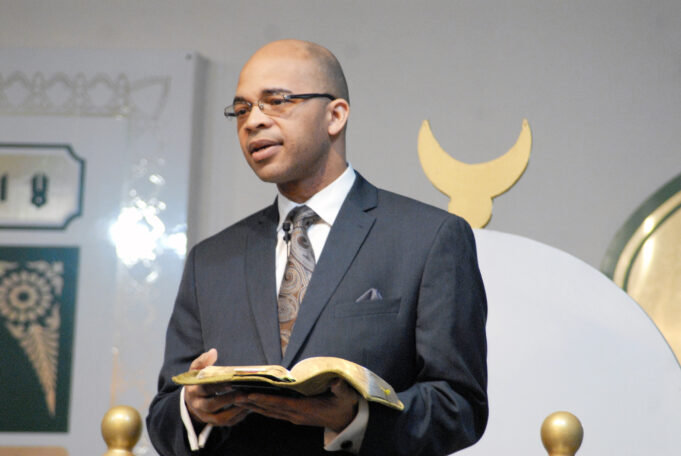 “Say: See, if the chastisement of Allah overtake you or the hour come upon you, will you call on others than Allah, if you are truthful?”

“And indeed We sent (messengers) to nations before thee then We seized them with distress and affliction that they might humble themselves.”—Holy Qur’an 6:40, 42

The invitation to “come to prayer” and “come to cultivation” is answered by millions of people in all four corners of the globe every Friday. In past years, thousands attending the Nation of Islam’s annual Saviours’ Day Convention filled convention center spaces for Jumu’ah, the Muslim congregational prayer.

This year the service was held virtually on Feb. 26, in respect for the Covid-19 pandemic that has engulfed the world since March 2020. Saviours’ Day 2021 marks the 144th birth anniversary of Master Fard Muhammad, who founded the 91-year-old Nation of Islam in July 1930. He was born Feb. 26, 1877, in the holy city of Mecca, Arabia.

“What a blessing to begin this weekend in the remembrance of Allah and His coming,” said Imam Sultan Rahman Muhammad, the student national imam of the Nation of Islam. “We thank Allah … yet we must have a mindset that is reflective upon the hour that we are in.”

Imam Muhammad delivered a special Saviours’ Day 2021 message—themed “A Universal Change”—from the modestly adorned musalla (prayer hall) in Mosque Maryam, the National Center of the Nation of Islam in Chicago.

“The world is suffering because of rebellion against Allah, against the utterances, the revelation of the prophets,” the imam explained.

The Believers must be among those who submit; the condition of the world is as though revelation has never come to humanity, he told those viewing the message virtually.

Imam Muhammad illustrated how Jews dismissed and abandoned following the laws of the Torah, then wrote and penned the Talmud and made it equal to the Torah. He said Christians don’t follow closely the discipline of the teachings of Jesus, and Muslims, unfortunately, have placed the light of the Qur’an behind their backs.

The rebellion is from up on high among the leaders in religion of this world, said Imam Muhammad. An old world is on its way out for a complete change for a new world under the rule of Allah, he said.

“Brothers and sisters of all faiths, we must return to our natural selves,” he said.

The hand of Satan is in the midst of religion, government, and our families. “The communities are suffering,” he explained. “But Allah, the Most-High, gives to us an opportunity to return.”

“For our straying from the path, Allah sent to us a pestilence from heaven” so that we may humble ourselves, he continued.

“We’re dealing primarily with repentance, and the reality of what the world has been facing in the pestilence and time of trial and suffering,” Imam Muhammad told The Final Call in an interview prior to his message.

He explained universal change is in motion and the Covid-19 pestilence that swept the earth for nearly a year is marking the change of worlds. Covid-19 shut down all of the religious capitols and institutional structures and devastated world economies.

“It’s not as though a scientist of this world is manufacturing something in a lab,” said Imam Muhammad. “This is directly from the thinking of God.”

Imam Muhammad expounded on the pestilence, saying, the “trial of the suffering itself” brought with it a “blessing in disguise,” which is the advent of a new world.

He enjoined the believers to repent and seek forgiveness from God as the Honorable Minister Louis Farrakhan had warned world leaders during his pivotal message July 4, 2020, called “The Criterion.”

“We cannot say our hands are clean; this is not a celebratory time,” he told The Final Call. “We’re losing members of our own family. It touched us.”

However, he reiterated, the suffering is not in vain. The “martyrs” who succumbed in the pestilence died for the ushering in of the Universal Government of Peace that was expected to come with Master Fard Muhammad.

Pestilence is mentioned ten times in the Qur’an, each time, the Imam said, it is associated with the change of worlds.

“If we are to see Allah’s favor, if we are to benefit from the salvation that has been brought by Master Fard Muhammad, then we must repent,” said Imam Muhammad.

Allah is not “desirous of hurting us,”  only to draw the people back to repentance and redemption, he stated.

”Through the guidance of God, we must not build our foundation on weak ground,” Imam Muhammad  said. “Our foundation has been laid. Will we survive is the question,” he added. “We must humble ourselves so that we will be the nation that Allah is preparing for an entire new world.”

Following the prayer, and before a joint recitation of Al-Fatihah, the opening chapter of the Holy Qur’an, nine-year-old Samadiah Muhammad, the daughter of Clarence and Leah Muhammad of Chicago, recited the last three chapters of the book in Arabic.

It must be noted also that a youth led Jumu’ah prayer was simultaneously conducted by Brother Ali Muhammad in the Mother Khadijah Farrakhan Children’s Village, which is a fun and educational space hosted by the Nation of Islam’s First Lady.

“Allah will bring about a new Islam. As for the principles of belief, they remain the same. There will be no more signs to be watched for the coming of God and the setting up of a new world of Islam. We are seeing this change now and are entering into it,” Imam Muhammad said, quoting “Message to the Blackman” by the Most Honorable Elijah Muhammad.