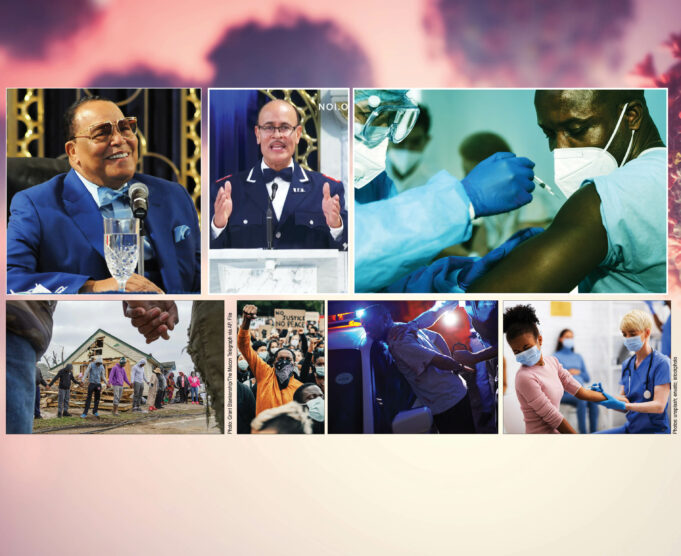 “Separation is the best and only solution to the racism, violence, tyranny, and oppression plaguing Blacks in America.”

Saviours’ Day 2021 closed its first day of workshops with a timely panel discussion that included historic and current film clips demonstrating the progress made when the Black community separates from the enemy and unites with itself.

The plenary session was titled “The Best and Only Solution: The Separation Process has Started” and was moderated by Atty. Ava Muhammad, national spokesperson for the Honorable Minister Louis Farrakhan and Nation of Islam. For the past several years, she has been crisscrossing the country holding town hall meetings educating the community on the importance of establishing an independent territory where Black people can build and thrive.

Such labor is bearing fruit for independence through self-determined and successful efforts in education, farming, business, community development, and policing. The plenary session Feb. 26 allowed for sharing of work underway to make Black people independent and to discuss plans moving forward.

Separation has been an essential part of the Nation of Islam’s program. Point Number Four of What the Muslims Want states in part: “We want our people in America whose parents or grandparents were descendants from slaves to be allowed to establish a separate state or territory of their own, either on this continent or elsewhere, we believe that our former slave masters are obligated to provide such land and that the area must be fertile and minerally rich … . Since we cannot get along with them in peace and equality after giving them 400 years of our sweat and blood and receiving in return, some of the worst treatment human beings have ever experienced. We believe our contributions to this land and the suffering forced upon us by White America justifies our demand for our complete separation and a state or territory of our own.”

That separation process has begun.

“We’re not here tonight beloved because of failure. We’re here tonight because of success. Allah, God, never fails to keep his promise. At the forefront of the immeasurable volume of that work was done by the Honorable Elijah Muhammad is the demand that America let go of the descendants of her former slaves. Only if we leave will we be able to obey God’s command to us come out of her, my people,” said Student Minister Ava Muhammad in opening remarks.

Providing an historical context, Ava Muhammad noted that in June 2018, the Nation of Islam initiated a series of town hall gatherings around the country to discuss separation. “These town hall meetings were predominantly Black and, in some cities, such as Phoenix, Arizona, and Los Angeles, they included a large turnout of the indigenous people of this continent, the Red and the Brown,” she said. “We traveled with a team to 21 cities. And that team was made up of Muslims who not only volunteered to be part of this but paid their own way to help take part in this great day that our parents prayed would come. The final city that we held a town hall in was Detroit, Mich., last year as Saviours’ Day 2020 at the legendary Shrine of the Black Madonna. The meetings were paused due to Covid-19,” she said.

But, added Ava Muhammad, “The response to the town hall meetings has been overwhelming.”

“Saviours’ Day 2020 a year ago was entitled ‘The Unraveling of a Great Nation.’ Two weeks after Minister Farrakhan delivered that message; all hell broke loose in America. And she moved into the last days of her fall. It is in progress at this moment. The words of the Honorable Elijah Muhammad are now in force. He said to the Black man and woman, Allah will make you separate. We are past the mercy given to us by Allah and his Christ through the Honorable Minister Louis Farrakhan’s presence as a spiritual leader. He is now the commander in chief and the head of the new Black nation bringing in a new reality,” said Ava Muhammad.

With those words, the plenary session was off and running.

Using an astute attorney’s skills, Ava Muhammad established her case through video media, taking plenary participants back to the early 1900s when Black people built independent towns, banks, schools, and businesses. She demonstrated a precedent for success by showcasing past Black independent thought and unity.

In moving to the panel presenters, Minister Ava Muhammad linked Minister Farrakhan’s call to make our communities better and safer places to live. “And so when he said make your own communities, I kept thinking on that, our own communities are not these colonies called ghettos or ’hoods that White people have designated for us. Our own community is a community where we control everything from the dirt, all the way up to the education of our children, growing our food, our businesses. Adding reparations is really about land,” Ava Muhammad noted. “If you don’t control the land, somebody else is controlling you.”

During his presentation, Donnie Muhammad, a school administrator, discussed the role education must play in the separation initiative. “At the root of education, it intends to extract the light from the student, the light that is a divine gift that the student is already endowed with the use of mathematics, the use of reading the use of science to extract those great gifts,” stated Donnie Muhammad. He went on to explain how many educational options are available with school choice.

Shahid Muhammad, the famed “Math Doctor” who teaches at the Muhammad University of Islam in Chicago, shared how he and his wife, Shahidah, were able to acquire farmland in New Buffalo, Mich. They own Al Jana Farms. “It is our desire, my wife and I, to transform those five acres into a paradise and garden for our children, in particular. But for really all of our people, it’s going to be an educational center with agribusiness teaching botany,” said Shahid Muhammad. “These learning labs will teach our children science, technology, arts, engineering, and mathematics. We plan to have hiking trails, walking trails, obstacle courses, with plans to teach cultural dance, meditation, agroforestry, water purification. We plan to use every square inch to make a profit and be productive.”

“Many of us are in effect alive and sensible enough to know that coming to terms with our oppression does not have to mean further assimilating into oppression,” pointed out Dr. Cheryl Mango, a history professor at Virginia State University, in her presentation.

“In fact, since the NOI popular campaign against what many may call the irrationality of chasing what’s often a mirage of equality, the community has witnessed an uptick and a turn inward, meaning depending on self to secure liberating freedom where ownership and control do not come from asking others who control you,” Dr. Mango said.

Perhaps the most impressive presentation of the evening came from Michael Muhammad, owner of the 22-acre MSGLG farm located in Pennsylvania. He initially set out to buy a small one-acre farm, and Allah (God) blessed him mightily.

Michael Muhammad brought down the house with his story about how he purchased two cows and put them in his SUV back seat with his children after buying the farm.

“We only saw an acre in our mind, and Allah increased the reward because we stepped out on some faith,” he said. “I tell you, Believers. This is our time. It’s our time.”

“This is in 2020, the whole year was filled with the pandemic, but we’re not experiencing the impact because Allah wanted us to know this was our time. This was our moment. This belongs to us. Some Believers who got inspired—Brother Sultan and his wife, Sister Khadijah out of Muhammad Mosque Number 12—said: ‘Hey, I want to buy some land.’ And we went out and bought some land about eight miles up the road because I wanted some hay.

“And I literally just wanted to buy some hay, but come to find out, the property that was selling the hay was also selling the farm itself. And I said, ‘why would I buy hay when I could buy the farm?’ But I didn’t want to go in by myself.” He, Sultan Muhammad their families came together to buy the farm. Because of the pandemic, the mortgage payments on the farm have been held in abeyance, said Michael Muhammad.

Akbar Kurt Muhammad, a Chicago-based community developer, gave a moving story about how he was inspired by Minister Farrakhan while incarcerated. The owner of several successful businesses, he is in the process of developing the community around Mosque Maryam. He is in the process of developing a city block, where he opened a laundromat. The Woodlawn neighborhood where his business is located is considered a food and health care desert. His vision is to rebuild the block and connect it to health care, financial literacy and entrepreneurship, food and nutrition, and agriculture. His not-for-profit Salaam Community Wellness Center, a health care facility, hopes to connect the best of non-Western medicine with the best of Western medicine, including acupuncture, yoga, deep breathing, tai chi and meditation, among other tools.

The Wellness Center also will serve as a training site for master’s degree level social work student interns to provide virtual and on-site case management for patients with limited transportation or who are better served in their homes. Another building will house entrepreneur training where participants will learn how to write a business plan, pitch ideas to investors and do a feasibility study, among other trainings. A dine-in restaurant that focuses on serving nutritious food will be part of the complex. The restaurant will be supplied with vegetables from a community garden that will be planted on an adjoining vacant lot. The garden will also serve as a source for agricultural training and an area for meditation. Akbar Muhammad already operates nine self-service laundry facilities.

Brother Cardio X, a police officer in Harvey, Ill., discussed the importance of a different kind of policing as essential to a new way of protecting Black people. He called for a more human approach but said our communities will need security. He currently works in a majority Black city and interacts with people using knowledge and the respectful manner learned in the Fruit of Islam. He said the way he conducts himself has been well received. And he doesn’t tolerate brutality. While arresting a shoplifting suspect, a security guard punched the man, said Cardio X. He immediately arrested the security guard.

In wrapping the session up, Ava Muhammad closed with video clips of believers all over the country who are buying land, farming, establishing independent schools. The separation process has truly begun in earnest.