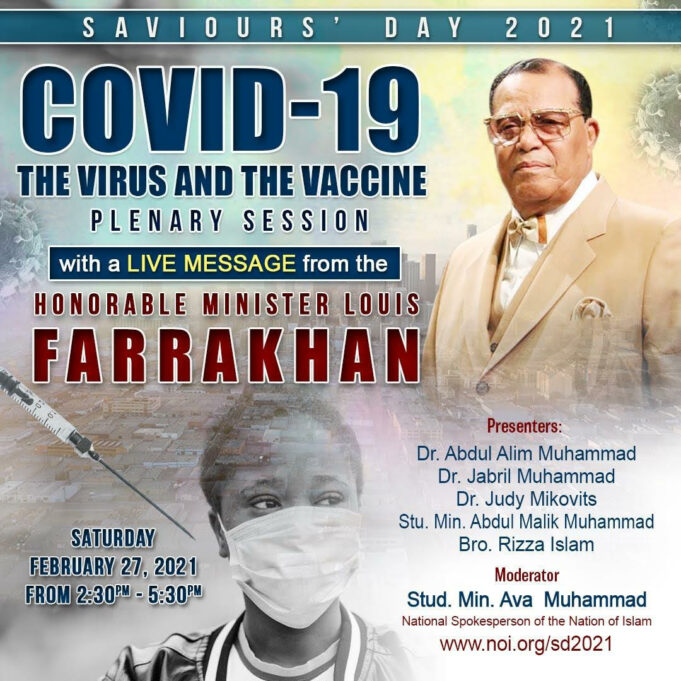 As if Saviours’ Day 2021 couldn’t get any better, the youth are starring in the spotlight for this year’s commemoration of the coming of Master Fard Muhammad, the Great Mahdi, to North America in 1930.

The annual Nation of Islam celebration and convention has featured opportunities for youth in workshops, fun activities and the much-loved Children’s Village sponsored by Mother Khadijah Farrakhan, wife of the Honorable Minister Louis Farrakhan.

This year’s convention will be held virtually. It will feature a concurrent virtual Youth Retreat and with powerful and uplifting workshops spearheaded by young people. The theme of the virtual Youth Retreat is “The Foundation of a Brand New World, the Generation of Fulfillment,” and will be Feb. 26-27, along with Mother Khadijah Farrakhan’s virtual Children’s Village, Feb. 26-27, and “The Wise Use of Social Media” and a virtual Believers’ Social on Feb. 27.

Convention sessions and activities will be accessible through www.noi.org.

The Honorable Minister Louis Farrakhan said in a 1993 address in St. Paul, Minn., “You, our young people, are the strongest, most powerful generation that we have ever produced since our fathers were brought to these shores as slaves.”

The head coordinator of the NOI Youth Retreat, Jessiah Muhammad, 24, said, “The idea behind the Youth Retreat was to give youth the platform to have presenters in their age group—and [an] age group with experience to pretty much talk to them. … It’s a lot of arts and culture within the Believers so the idea was to give them a higher understanding.”

Panel discussions will include “Expressing Your Musicality,” “Finding Your Purpose,” “Healthy Relationships” and “Defending Farrakhan” through the proper use of social media.

Jessiah Muhammad said one of the topics, “Defending Farrakhan,” is very important in the age of technology and social media. “We have to not only know what to say but that it has an argument. We can’t say ‘aw man, I love him,’ and can’t defend him.”

Zuri Muhammad, 19, is taking the lead on registration for the virtual Youth Retreat. The point of the event is to allow youth to interact with one another during especially trying times, he said.

Zuri Muhammad said this Saviours’ Day is for the youth to come together and produce opportunities for themselves.

“When the time comes, any one of the youth will be able to take a position, as in, take leader roles in wherever they go,” he said.

The National Assistant to the Honorable Minister Louis Farrakhan, Student Minister Ishmael Muhammad, said even though the 2021 Saviours’ Day observance will be virtual, it will be just as uplifting as previous conventions.

“We, in the Nation of Islam, are very happy and humble to celebrate and observe the birth of the founder of the Nation of Islam in the West, the long awaited and expected Messiah of the Christians and Mahdi of the Muslims, Master Fard Muhammad, who was born on the 26th of February in 1877 in the Holy City of Mecca,” he told The Final Call.

“Saviours’ Day over the years has always been public and the public has been invited to attend and participate in the informative and educational and inspiring workshops and, of course, the keynote address delivered each and every year,” added Student Min. Ishmael Muhamad.

Under the leadership of Min. Farrakhan, Saviours’ Day has brought thousands of people together since 1981, the first gathering held in the rebuilding and reestablishing of the work of the Honorable Elijah Muhammad.

“We have chosen the theme that the Honorable Elijah Muhammad lifted in the early 70s, I believe in the Muhammad Speaks newspaper where he asked the question: How Strong is the Foundation? Can we survive?” Ishmael Muhammad continued.

“The foundation of something is that which supports. It’s the basis for support. So, we have designed Saviours’ Day to help, to strengthen the foundation of the Believer in God and the human being that needs knowledge and guidance to get through this great time of trouble and dark hour that the scriptures are told would be visited upon the face of every inhabitant of the Earth.”

Student Min. Ishmael Muhammad will be hosting a virtual workshop, “God is a Man,” on Feb. 26.

Student Minister Ava Muhammad, a gifted attorney, author and Student National Spokesperson of Min. Farrakhan, said, “Everything that takes place is the result of Allah’s active will or His permissive will. I do look forward to the participants having the ability to truly focus in on content.”

The Saviours’ Day workshops and seminars are essential to our development because Minister Farrakhan determines the focus, and for the last several years the focus has zeroed in on the Muslim Program, on the development of the nine ministries, Student Min. Ava Muhammad explained. “As we stand poised to move from mosque structure to nation, it is critical that we gain the knowledge and enlightenment that is given to us in the workshops.”

The Muslim Program, which can be found on the inside back page of The Final Call newspaper, states “What the Muslims Want” and “What The Muslims Believe.”

Student Minister Ava Muhammad will be hosting her “Elevated Places” live radio show Feb. 25, which will be available via noi.org.

Convention workshops, town hall meetings and activities will run Feb. 26-27 and a keynote address will close the convention on Sunday, Feb. 28, at 10 a.m. CDT.

For more information and to register for Saviours’ Day, visit noi.org/sd2021