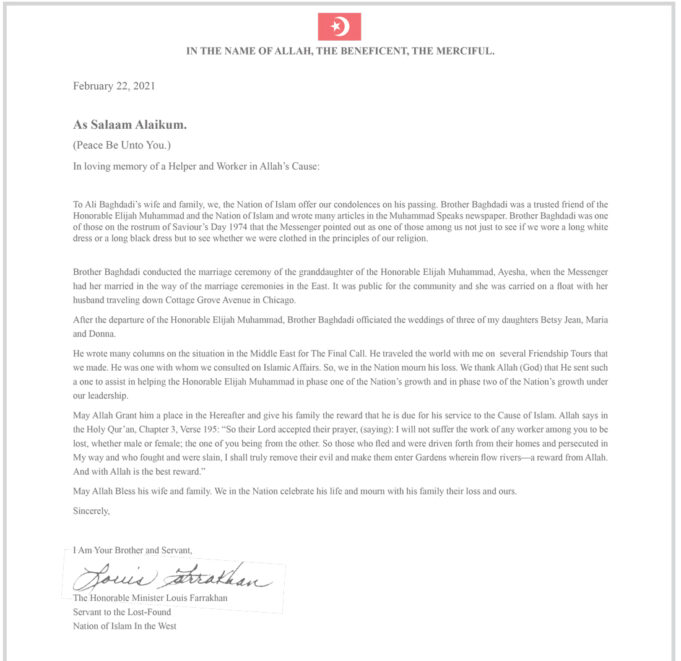 In loving memory of a Helper and Worker in Allah’s Cause:

To Ali Baghdadi’s wife and family, we, the Nation of Islam offer our condolences on his passing. Brother Baghdadi was a trusted friend of the Honorable Elijah Muhammad and the Nation of Islam and wrote many articles in the Muhammad Speaks newspaper. Brother Baghdadi was one of those on the rostrum of Saviour’s Day 1974 that the Messenger pointed out as one of those among us not just to see if we wore a long white dress or a long black dress but to see whether we were clothed in the principles of our religion.

Brother Baghdadi conducted the marriage ceremony of the granddaughter of the Honorable Elijah Muhammad, Ayesha, when the Messenger had her married in the way of the marriage ceremonies in the East. It was public for the community and she was carried on a float with her husband traveling down Cottage Grove Avenue in Chicago.

After the departure of the Honorable Elijah Muhammad, Brother Baghdadi officiated the weddings of three of my daughters Betsy Jean, Maria and Donna.

He wrote many columns on the situation in the Middle East for The Final Call. He traveled the world with me on several Friendship Tours that we made. He was one with whom we consulted on Islamic Affairs. So, we in the Nation mourn his loss. We thank Allah (God) that He sent such a one to assist in helping the Honorable Elijah Muhammad in phase one of the Nation’s growth and in phase two of the Nation’s growth under our leadership.

May Allah Grant him a place in the Hereafter and give his family the reward that he is due for his service to the Cause of Islam. Allah says in the Holy Qur’an, Chapter 3, Verse 195: “So their Lord accepted their prayer, (saying): I will not suffer the work of any worker among you to be lost, whether male or female; the one of you being from the other. So those who fled and were driven forth from their homes and persecuted in My way and who fought and were slain, I shall truly remove their evil and make them enter Gardens wherein flow rivers—a reward from Allah. And with Allah is the best reward.”

May Allah Bless his wife and family. We in the Nation celebrate his life and mourn with his family their loss and ours.

I Am Your Brother and Servant,