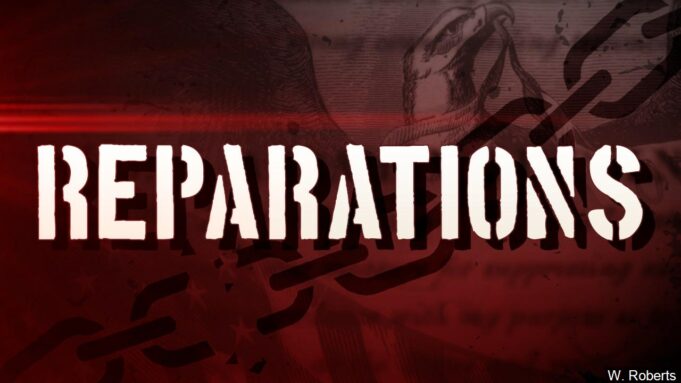 Rep. Sheila Jackson-Lee (D-Texas) recently chaired a House Committee hearing of the Judiciary, Subcommittee on the Constitution, Civil Rights, and Civil Liberties on  bill H.R. 40 and potential federal legislation on reparations as part of a movement towards developing and implementing proposals designed to repair, compensate and heal Black people in this country.

Dr. Ron Daniels, president of the Institute of the Black World 21st Century and convener of the National African American Reparations Commission, said the hearing, titled “H.R. 40: Exploring the Path to Reparative Justice in America,” represents a significant move forward. The bill would establish a commission to study reparations and offer remedies to compensate Black Americans for centuries of slavery.

Dr. Daniels is one of the cadre of activists and advocates who have worked for the last three decades seeking to make reparations a reality. He joined a Zoom conversation the night of the hearings.

“This is a significant moment in the history of this country. We should remember John Conyers, Dr. Conrad Worrill and others,” he said.

The late Congressman Conyers first introduced the bill in 1989 and introduced it every year for 30 years. The late Dr. Worrill, a Chicago-based activist and scholar, was a ceaseless champion for and defender of reparations as leader of the National Black United Front and worked in coalition with others in the battle.

The federal bill will allow a commission to offer recommendations to Congress as to what compensation and atonement for slavery might look like.

Much of the sojourn of Blacks in the United States has been marked by chattel slavery, the Black Codes, Jim Crow, segregation and deeply embedded racial discrimination.

What this reality often looked like was bondage; racial terror delivered by the Ku Klux Klan and other White domestic terror organizations, police officers, sheriffs and others in law enforcement; restricted movement of Black people after slavery ended; lynching, rape, land theft and murder; chain gangs; and more recently, prison labor; residential segregation; restrictive covenants; separate but equal schools and facilities; inferior or no education; redlining; overt and covert racism; and a litany of other ills.

For the 400 years that Blacks have been in the U.S., White America has never been held to account for enslaving and brutalizing Black men, women and children. Often, those in the mainstream have been reluctant to acknowledge must less agree to right centuries of egregious wrongs visited on Blacks for no other reason than their color.

“In the specific context of Black people, this is a demand for a formal acknowledgement of historical wrong,” said Ms. Taifa, a noted justice system reform strategist, advocate and scholar.

For decades, she said, the issue of reparations was developed and advanced in Black Nationalist/Pan African circles. The catalyst was a gathering in 1987 where members of the National Conference of Black Lawyers posed and sought to answer the question of what was needed for Black people to secure reparations. “They discussed how to move this forward,” said Ms. Taifa. “Sororities, fraternities, civil rights and civil society groups all came together. We’re moving towards full repair and restitution.”

Ms. Taifa—founder, principal and CEO of The Taifa Group LLC, a social enterprise firm whose mission is to advance justice—said there are still living victims of the Tulsa, Oklahoma massacre who were part of the claim.

“African Americans are still dealing with general trauma from massacres in Wilmington, North Carolina, Colfax, Louisiana, Tulsa and Elaine, Arkansas. It’s not just economic,” she said. “There are so much injury areas. The remedy must be multifaceted as well … we have arguments in legal and legislative areas.”

She and other panelists pointed out that states and countries often shy away from formal apologies because that could open the door for monetary compensation. University of Connecticut professor Dr. Thomas Craemer, who has studied race and reparations for the past 15 years, estimates that the cost of slavery and loss of wealth to Blacks because of slavery stands at about $14.5 trillion.

Kamm Howard, national male co-chair of N’COBRA, said, “The hearing was a success. We wanted to come out to this Congress—and its 535 members—that this must be dealt with. We’re not accepting anything less than full reparations.” Mr. Howard is a Chicago businessman, real estate investor, and an internationally respected reparations activist. “This hearing positions us to go through the legislative process. It’s a necessary step. We got testimony to put it out there in no uncertain terms that this community must be repaired.”

“The commission allows for collective thought and discussion and public hearings. The commission is designed with particular outcomes in mind. We saved this country by putting the Democratic Party in … we have to be clear what was delivered and what they owe us. We’ve got to get something in return. This is self-determination for Black people,” he said.

Kennis Henry told viewers and listeners that no one has the luxury of sitting on the fence.

“There’s no middle ground. You’re either for it or against it,” said Ms. Henry, national chairperson of N’COBRA’s Legislative Committee. “This is integral to the reparations movement. It’s about full repair, not about piecemealing. Our communities are damaged. We need to resolve the disparate conditions of healthcare, education, housing and other issues. We must address the five areas of injury. We must be able to show that people are healed.”

“For me, I’m not saying don’t give people a check, but checks do not solve the problem of inter-generational poverty. You cannot resolve every issue with a check. There are so many things that have to be dealt with, so much that needs to be repaired.”

Ms. Henry said she has been able to bring in 162 co-sponsors of the bill.

“We tried to get the legislation passed statewide. I do a lot of outreach, get co-sponsors. It’s kind of like cold calling. The thrill is when you’re able to sell them on the idea,” she said.

Dr. Greg Kimathi Carr, chair of African American Studies Department at Howard University, said the question is whether the hearing will allow Blacks to continue a rational conversation. If it does, he said, it will have the impact of unifying Black people.

“Our generation came into this work three decades ago. We’re now looking at a revival of this movement,” he said to Zoom call listeners.

The broader impact, Dr. Carr identified, is very likely to be the reshaping of the United States as Blacks press their moral demands, develop their nationhood and press for redress and compensation.

“We know the U.S. has no respect for us. We are making a moral demand to states that do not have morality in this,” he said. “H.R. 40 is beginning to insert itself. A. Philip Randolph said, ‘You get what you can take, and you keep what you can hold.’  It’s about the possibility of America and if we can reimagine what this country is about.”

“Our demand is a test of how much longer this little USA will survive. Our people will survive regardless.”

Drs. Daniels and Carr warned this was the beginning of a long process.

Mitch McConnell (R-Ky.) pushed back vigorously against reparations, making it clear that the issue would not be considered while he led the U.S. Senate.

At one point, he stated that the election of President Barack Obama in 2008 essentially negated the need for reparations.

The panelists, over the course of two hours, tied reparations to practical applications such as lifting Black people out of poverty, eliminating redlining and forcing banks and other financial institutions to stop doling out subprime loans to Black and Brown people, and pressuring mortgage companies to begin to deal fairly and honesty with Black Americans so that they have easier access to homeownership and that they are not punished for being Black when selling their homes.

Jeffrey Robinson of the American Civil Liberties Union, said although the ACLU has not in the past been a significant supporter of H.R. 40, there was what he described as a spirited debate and vote on the national board.

“The ACLU has taken strides to work with N’COBRA and other groups,” he said. “We can promote the words and work of people working on this platform. We have put on seminars in Washington, D.C., South Caroline, and Tulsa virtually. Seattle is coming. Our role is to support groups doing work and spread information out a widely as possible.”

“What is our legal claim? H.R. 40 is not a lawsuit, it’s a piece of legislation looking at repair and healing. You can’t fix what brought us to 2021 with new policy. That’s what people need to understand,” Mr. Robinson said, referring to the Biden administration’s promise to imprint racial equity in all the federal government’s policies and programs.

After months of negotiation and years of groundwork, Ms. Rue Simmons introduced an item before the city council: 126-R-19, “A Resolution Establishing a City of Evanston Funding Source Devoted to Local Reparations.” Essentially, the plan was to divert all of the money from the sale of cannabis to a separate fund that would be used for reparations locally. The initial investment was set at $10 million, Mr. Smith said, for “housing assistance and relief initiatives for African American residents in Evanston” and “various Economic Development programs and opportunities for African American residents and entrepreneurs in Evanston.” Anyone can also contribute to the fund.

“We decided to advance reparative justice in line with injury in the areas of housing, zoning and the stripping (away) of (Black American) wealth,” said Ms. Rue Simmons. “The $10 million commitment, 100 percent of cannabis tax funds works. It has contributed to families and businesses. The faith community has also supported this with dollars and goals.”

“This is a legacy project,” she explained. “We have committed $400,000 with the understanding that more must be done … it’s important that the national conversation is advanced because it gives us support but local efforts won’t make repair. Much must come from the states and the federal government.”

But, she said, local action counts too. “We’ve had law firms, corporations and international organizations seeking to get involved,” she said. “This can really advance the conversation. The frontline is your city. Get together, let’s not be paralyzed. Work on projects, work on proposals.”

“The best apology is reparations. Justice is due. It’s long overdue. It will take years, multiple generations to complete this work,” she added.