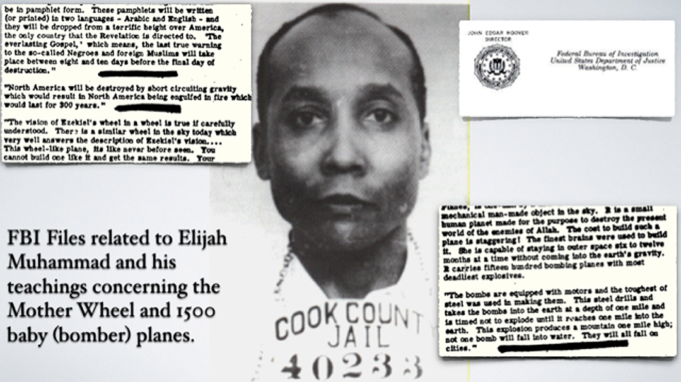 Apparently there has been news about the Central Intelligence Agency (CIA) releasing and disclosing its documents about unidentified flying objects (UFOs) to the public. These are hundreds of files with most of the documents being heavily redacted to the point where it becomes difficult to decipher the depth of what’s being shared.

But let’s be honest. Did we really think that an agency, whose job has been to lie and deceive the public, is going to suddenly come clean about all they know concerning UFOs? Moreover, who told you the CIA is somehow the authority on this subject?

Any real or truthful disclosure about the worldwide UFO phenomena has to directly involve the Nation of Islam (NOI), for it was this group’s founder—Master Fard Muhammad—who is directly responsible for the construction and operations of these wheel-shaped crafts that have captured the attention and concern of every world government and military.

It was He who introduced this gigantic circular craft called the Mother Wheel (and its accompanying 1,500 smaller Wheels) to the Honorable Elijah Muhammad in the early 1930s. To this day, the NOI remains the only entity to give definitive facts concerning these global phenomena. The Honorable Elijah Muhammad answered the questions and solved the mystery of the UFO phenomena before the Government or the public had any major questions or concerns about it.

If the CIA files don’t include this most central truth concerning the UFO phenomena, then it’s clear they aren’t being truthful. That would be like telling the public about the history of bean pies without even mentioning those who brought this magnificent dessert to the public forefront.

Likewise, it is utterly deceitful to disregard the very people who brought the truth about these wheel-shaped planes to public attention. That’s what the big secret of the UFO phenomena involves.

In truth, it’s a hard pill to swallow for most people, especially for those who rule over world systems of White supremacy. It’s extremely difficult to learn that the supreme power behind the UFO phenomena is represented by the children of once-slaves.

It’s hard to accept the truth that all the scriptural prophecies about God’s coming with His heavenly Wheels is actually being fulfilled in the real world and in real time.

It’s almost impossible for religious and political leaders to admit that the Honorable Elijah Muhammad and his servant, the Honorable Minister Farrakhan are the clear representatives of this divine power on earth—even though they’ve proven to be 1,000 percent right and exact on this.

So, since world leaders find it difficult to have a discussion (or debate) with the Nation of Islam on this topic, they’ve responded by either ignoring the truth, or hiding the truth altogether.

This is what the worldwide UFO cover-up is all about, and the CIA has been a leading conspirator in this deception. Unlike what they’ve led you to believe, these planes have nothing to do with aliens or reptilians that are only seen in movies; rather, it has to do with a real God who brought real evidence of His power in the real world just as the prophecies predict.

The fact that the CIA is suddenly releasing their information about UFOs proves that they’ve been lying and hiding something for several decades, and there’s no rational reason to believe they’ve suddenly felt obligated to come forward with the truth.

Here’s an interesting fact: The CIA, FBI, Homeland Security, and private groups like the Anti-Defamation (ADL) league have all worked together to discredit the truth about the UFO phenomena and its direct connection to the Nation of Islam.

In its document titled “The Literature of Apocalypse: Far-Right Voices of Violence,” the ADL placed UFO Research in its list of anti-Semitic conspiracy theories. I guess this means the hundreds of millions of people around the earth who’ve seen these crafts are all anti-Semitic.

This is the same ADL who touts that they’ve advised and trained “every” U.S. law enforcement agency, which includes the FBI, CIA, Homeland Security, and every police department. In fact, all the aforementioned groups have a proven history of misinforming the public about the NOI and the UFO phenomena.

Any so-called researcher who overlooks these most important facts CANNOT be serious about true UFO disclosure. So here are a few questions we should pose to the CIA and any group that claims to be serious about the truth on UFOs:

It took nearly 70 years for the CIA to even admit that Area 51 officially existed. So, are we foolish enough to rely on these agencies whose job it is to deceive, to all of a sudden tell us the truth?

And are we foolish and negligent enough to overlook the FACT that the Nation of Islam is on record for authoritatively introducing this reality to the modern world?

Do the CIA documents acknowledge that the federal government arrested the Honorable Elijah Muhammad in 1942 (by an executive decision), and interrogated him about his connection to the huge Wheel-shaped object (UFO) that the U.S. Armed Forces encountered a few months prior that same year?

Is it surprising that the CIA was formed in the wake of mass UFO sightings that catapulted after the Government investigated and incarcerated Elijah Muhammad for his connection to these planes?

It can be argued that the development of the National Security Administration and the Central Intelligence Agency were likely in response to the accumulating sightings and reports that had escalated by 1947. On July 26 of that year, President Harry Truman signed the National Security Act. This act served to restructure the U.S. Armed Forces, its foreign policies, and its Intelligence agencies. It was out of these efforts that the CIA was formed on September 18, 1947. The CIA was developed to serve as an independent wing of the government to collect and use vital data gathered from various sources.

Understandably these agencies were developed in the wake of World War II, but the increased UFO activity provided additional reasons for the U.S. Government to reappraise its own sovereignty. After all, these disc-shaped planes were now being spotted by thousands of people around the country and interfering with America’s military bases and weapons sites.

A seemingly new and overwhelmingly superior power was making its presence felt through Master Fard Muhammad’s Wheels (so-called UFOs) and there was nothing the government could do about it, except try to incarcerate and silence the NOI, so they could misdirect the narratives for their interests.

This explains why these Government agencies deliberately hide the truth about the Nation of Islam’s connection to these so-called UFOs and the power behind them. Now get this, the same government that recognized and arrested the Honorable Elijah Muhammad as the representative of these Wheel-like planes is the same government that aims to discredit him and the NOI’s connection to these planes.

The fact that the most supreme power witnessed by man has been demonstrated in the real world should be the most important topic of worldwide discussion—especially for the Black and oppressed populations who don’t see any power greater than their oppressors’ power.

But because these Wheels are directly connected to the children of once slaves, there has been a deliberate refusal to acknowledge the proven source and representatives of this phenomena. They’d rather give credit to fictitious aliens that they made up before acknowledging that Elijah Muhammad and Louis Farrakhan bring clear proof that demystifies all their theories.

There is not a leader on this planet who dares the world to disapprove his connection to these Wheels as does the Honorable Minister Louis Farrakhan. Yet his staunchest critics and enemies refuse to challenge him on this most critical topic. Instead, these agencies and groups try to silence him with all their might, so they can control the narrative about him and what he represents. They know he represents the God of these Wheels (so-called UFOs).

Ilia Rashad Muhammad serves on the NOI Research Team, is a student in the ministry and is the author of the highly acclaimed book, “UFOs And The Nation Of Islam: The Source, Proof, and Reality of The Wheels.”