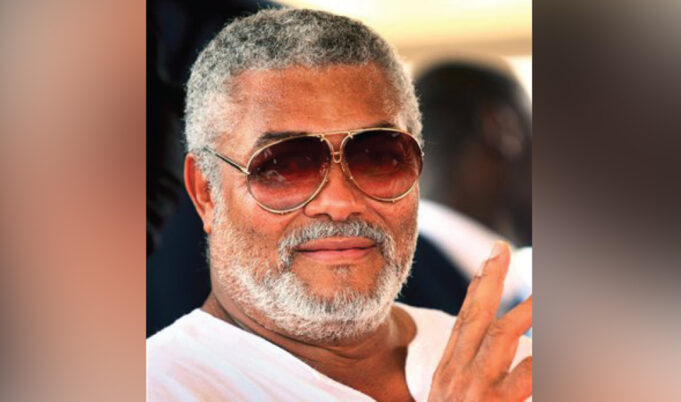 When a strong man goes, there must be an assessment of his life and work, and for Jerry John Rawlings, we must be grateful.

His love for the people of Ghana, his work for the African continent, and being a brother and friend of the Honorable Minister Louis Farrakhan and the Nation of Islam was proven.

Going back to 1986, President Rawlings opened the doors of Ghana for Minister Farrakhan when other countries closed theirs at the instigation and threat of the United States government.

At the time Minister Farrakhan embarked on an international speaking tour that was to take him to Nigeria then Ghana and other African nations. The same journey included Saudi Arabia, Pakistan, and China.

At the time the U.S. government targeted African leaders with a misinformation campaign against Minister Farrakhan to dissuade them from letting the Minister in their countries.

Because of the propaganda, the Minister was declared persona non grata in England, where the authorities arrested him after he landed in London in transit to Africa. He was detained for 14 hours at Heathrow Airport and his passport was taken and Nigerian pilots with a letter from British authorities describing the Minister as a troublemaker. The documents were to be handed to the Nigerian authorities on arrival, which the pilots refused to do.

It so happened the pilot had been in the audience at Madison Square Garden in New York, where Minister Farrakhan spoke to 50,000 people months earlier on October 7, 1985.

After the ordeal in London and some difficulty in Nigeria, Minister Farrakhan went to Ghana where the same misinformation had also reached the government.

However, Mr. Rawlings was a man of principle and was independent. He allowed the Minister in and let him speak to different sectors of the country.

I will never forget President Rawlings’ famous quote, while addressing an assembly of the top military leaders in Ghana, after allowing Minister Farrakhan to address them, which itself is unprecedented for a military leader and government to do.

“When my intelligence told me ‘A,’ I did ‘Z,’ ” said the Ghanaian president.

Mr. Rawlings said he went opposite of what his intelligence service was reporting about the Minister. He said if he listened, he would never have let Min. Farrakhan in the country, much less, have afforded him the opportunity to speak. This was the backstory to the close friendship that was formed between President Rawlings and Minister Farrakhan.

He opened all of Ghana to the Minister and his delegation for 13 days. The Minister spoke to the scholars, the Ulama (the guardians’ interpreters and transmitters of religious knowledge in Islam, including some on law and doctrine). He spoke to the students at the universities of Ghana-Legon and of Cape Coast. He spoke to Christian leaders and traveled to the North to help resolve a controversy among the Muslims over the finishing of a mosque.

President Rawlings assigned Dr. Abdullah Botchwey, and Dr. Ben Abdullah, who was the minister of culture and tourism and an excellent teacher of Ghanaian history, to move around the country with the Minister and his delegation.

By 1990 Minister Farrakhan had returned to Ghana to celebrate the 80th birthday of Dr. Kwame Nkrumah, the first president of Ghana.

The Minister said yes, he would like to do that and discussed with President Rawlings what he had in mind. Subsequently, I relocated with my family to Accra to open the Nation of Islam Ghana Mission and Information Center. The offer to establish an office in Africa speaks to President Rawlings’ vision and leadership in the tradition of Dr. Nkrumah, who also opened the way for Blacks in the Diaspora to repatriate and reconnect to their motherland. Historical men like W.E.B. Du Bois and his wife Shirley, George Padmore and many others left America for Ghana.

President Rawlings also opened the door to other African leaders for Minister Farrakhan. I recall he made available a military plane to fly the Minister and his delegation to Ouagadougou, the capital of Burkina Faso, where Minister Farrakhan met President Thomas Sankara. President Rawlings was a mentor to President Sankara, who patterned the revolution that ushered him to power after the principles behind the 1981 coup d’état that brought Mr. Rawlings to power.

Minister Farrakhan and President Rawlings are Brothers in the Struggle for a free and justified Africa.

The comradery continued and in 1994, President Rawlings opened the way for the Nation of Islam to convene its first Saviours’ Day convention on the African continent where 1,900 Blacks from the Diaspora traveled to Accra, Ghana.

President Rawlings honored us by officially opening the gathering at the Accra International Conference Center and closed it three days later at Independence Square, where Minister Farrakhan delivered an inspirational and strong message called “Fulfilling the Vision of the Honorable Elijah Muhammad” before a crowd of 40,000 people.

There is much more about the relationship between President Jerry John Rawlings and Minister Louis Farrakhan that must be narrated by those who know and helped make this history. We are grateful, honored and will never forget what President Rawlings did in life for Minister Farrakhan and the Nation of Islam.

A. Akbar Muhammad is the International Representative of the Nation of Islam and Author of Africa & The World Revisited. He can be reached at [email protected].