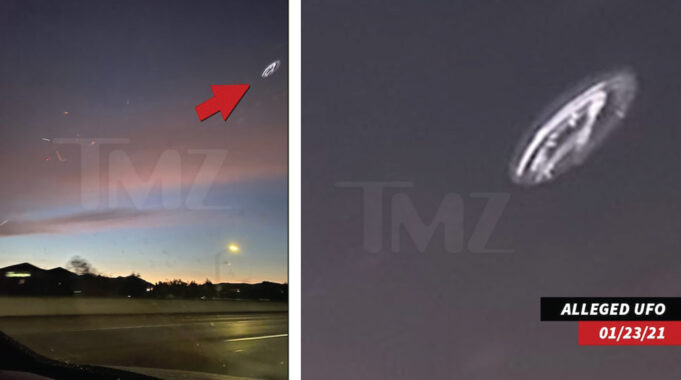 (FCN)—A stir was created with a TMZ report of a “UFO sighting” in Los Angeles, south on the 101 Freeway.

In a Jan. 30 report, TMZ.com shared images of the craft reportedly taken “last Saturday.” “An eyewitness was on her phone when she saw this thing hovering in the sky, flying in the same direction she was heading … with a group of lights trailing behind it. The eyewitness says she shot three consecutive photos as quickly as she could, and as you can see … the unidentified object appears to have changed positions, both tilting ever so slightly and moving to a new spot in the sky. We’re told this UFO was only visible for a few seconds, before it literally vanished into thin air.”

“Turns out, our own photoshop wiz seems to agree … these don’t look like fakes. Our graphic artist tried an experiment with stock images of ‘glowing discs,’ ‘UFO’s’ and ‘flying saucers’ … to see if the images could be manipulated in a similar fashion as the tipster’s photos. She concluded it would be hard to cut/paste these images with the exact angles of the tipster’s images. So, these photos do appear to be legit … or at the very least, probably not photoshopped,” said TMZ.com.

Nation of Islam patriarch Elijah Muhammad and Min. Louis Farrakhan have taught about the reality of so-called UFOs. Messenger Muhammad taught of “the Wheels” as fulfilment of the biblical prophecies found in the chapter Ezekiel and other scriptures as well as in the Nation of Islam’s groundbreaking Muhammad Speaks newspaper and his monumental books, “Message To the Black Man” and “The Fall of America.”

“The Honorable Elijah Muhammad started learning and teaching of this Great Wheel called ‘The Mother Plane’ around 1932.  Ten years later in 1942, after the Japanese attacked Pearl Harbor, the Temple (as it was called at that time) was raided by law enforcement officials under the guidance of the FBI,” said Min. Farrakhan in Part 52 of his “The Time and What Must Be Done” lecture series.

His message, “The Wheel (That Great Mother Plane)—One of Its Two Natures is ‘Death,’ ” originally aired on Saturday, January 4, 2014.

“The Honorable Elijah Muhammad said it is ‘the greatest military weapon ever developed in the annals of the history of Allah (God) and man in this Universe.’ He said that the Vision of this Wheel was seen thousands of years before it came into being, or became a reality. He said that this weapon was made for the purpose of destroying this present world in The Final Battle with the forces of evil that had ruled our present world,” said Min. Farrakhan in an article published in The Final Call newspaper.

“The Honorable Elijah Muhammad said that this Great Wheel was made for military purposes, for it was to engage in The Great ‘Battle in the Sky’ that would end this world and usher in that world that the prophets exclaimed would come at the end of the 6,000-year rule of the enemy of Allah (God) and the enemy of the Aboriginal People of the Earth,” he added.

The Minister added, “In the scriptures of the Bible, we read that Moses was guided and protected by this ‘cloud’ that was ‘a pillar of fire by night’ and ‘a cloud by day’—but no such Wheel was in existence in the time of Moses. So what we read of ‘Moses’ and this ‘cloud;’ and ‘fire and light coming from this cloud’ to part ‘The Red Sea’ and destroy ‘Pharaoh’s army’ did not happen like that 4,000 years ago, but that was a prophetic, symbolic picture of the end of this world, and the destruction of the armies of this world and the power that holds sway over the people.”

In Muhammad Speaks newspaper, June 8, 1973, the Honorable Elijah Muhammad wrote in article titled “Ezekiel’s Wheel: The Battle in the Sky:” “I am so happy that Allah (God) has prepared this unmatchable weapon to save us, the Black People [of America]!”

Min. Farrakhan added, “No ‘little green men,’ with olive skin and funny looking heads! Human beings that look just like you and me, but they are members of The Original Nation—the power of which you have not seen displayed.”