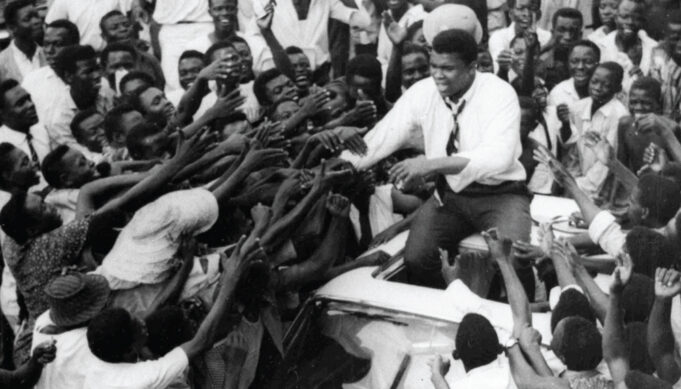 After Cassius Clay, who soon after was renamed by Nation of Islam patriarch Elijah Muhammad as Muhammad Ali, defeated world heavyweight boxing champion Sonny Liston in 1964, the new world champion embarked on a U.S. tour before an extended tour of Africa.

While in Boston the Muslim champion told the Nation of Islam’s legendary Muhammad Speaks newspaper about his upcoming tour. “The teachings of the Honorable Elijah Muhammad gives us a true knowledge of our history and of our own selves. It gives us the true history and science of the world of Black people. It gives us pride in ourselves and our people,” Ali commented.

“It is because I am a follower of the Messenger that has brought me personal invitations from Asia and African Presidents and Prime Ministers,” he said.

“Many Negro celebrities take State Department ‘goodwill’ tours of Africa or Asia,” Ali said, “but few have received the personal congratulations and invitations from so many world leaders.”

According to the National Endowment for the Humanities: “During the Cold War, professional and amateur musicians from the United States traveled the world under the sponsorship of the U.S. State Department’s Cultural Presentations program. The musicians were sent to enhance the reputation of American culture, compete with Soviet and Chinese performers, forge personal connections with citizens of other lands, and create a positive impression of the U.S. and its foreign policy.”

In diplomatic circles this is referred to as “soft power.”

In 1964 Muhammad Speaks reports Ali “preparing to embark upon a world-wide tour to be accompanied by an athletic troupe, Charles P. Howard, Sr. United Nations Correspondent and a team of television network photographers and reporters.”

What the world may not know, or shown little interest in recognizing, is that the Nation of Islam through its weekly newspaper displayed its own independent, soft power via Muhammad Speaks. The nationally-distributed publication allowed world leaders, including Ghana’s Kwame Nkrumah, to utilize its widely circulated pages to give coverage to and show similarity between Africa’s liberation struggle and the struggle for human and civil rights in Black America.

One key player among its reporting staff was UN correspondent Charles P. Howard, who had formed ties with many world leaders including President Sekou Toure of Guinea and Ahmed Ben Bella of Algeria as he interviewed, traveled to Africa and covered their stories in Muhammad Speaks.

Howard graduated from Howard University Law School in 1954, received a degree in International Law at New York University the next year and received undergraduate training in journalism. He was well equipped to assist where needed during Ali’s overseas tour.

Promotions for the film say the discussions in the Hollywood production are fictitious though the meeting happened.

The film’s promoters flew the elderly Jim Brown to the Hampton House Hotel for what was released as a four minute video but nothing about the meeting in Miami is shared.

During a recent interview on a Harlem radio show, “The Wisdom Table,” host Leroy Muhammad interviews Osman Karriem, who was formerly known as Archie Robinson. He is former road manager for the legendary Platters singing group and an advisor to many music artists, including Billy Eckstine, Sarah Vaughn, Count Basie, Max Roach, and others. Karriem, who this author has previously interviewed about his behind the scenes involvement in the music industry, was a member of Mosque No. 7 in New York under Minister Malcolm. Before Herbert Muhammad took over management of Ali in the fight game, Karriem was a manager and Ali advisor.

Not having seen the film, but saying he was indeed in the hotel room and part of the discussion, Karriem recounted what occurred in the room. It included a discussion, initiated by Jim Brown, about a business arrangement where his partners would invest in a kind of paid per view service designed to expand the viewing audience for Ali’s fights. The business was to be called “Knock Out Productions.” There is also a photo, which appeared in Muhammad Speaks of Muhammad Ali and Sam Cooke in Miami, listening to a reel-to-reel tape recording. Mr. Cooke and Ali collaborated on the song “The Gangs All Here.”

After the fight Karriem says Ali had many invites from world leaders and discussed the idea of taking his newfound fame abroad. Karriem said he had two meetings to discuss the idea of the trip with the Honorable Elijah Muhammad. During the second Chicago meeting he mentioned Min. Malcolm and their frequent visits with Mr. Howard, who also was a good friend of Paul Robeson, to functions at the United Nations.

After hearing how international relationships had developed from UN functions, Mr. Muhammad gave the trip his blessing. During a previous interview Karriem told me Mr. Muhammad gave him a sizable amount of money to help pay for the trip. Karriem was also an accountant.

Messenger Muhammad suggested UN correspondent Howard should be a part of the trip along with some other NOI members.

But Messenger Muhammad gave the Muslim members of the trip Islamic names, including Cassius Clay because he didn’t want them in Africa and the Muslim world representing the NOI with Christian names, according to Karriem.

“In Africa, Ali discovered that he was more popular abroad than at home. While most Americans refused to recognize his Muslim name, strangers, writers, and dignitaries in Ghana, Nigeria, and Egypt showed him respect by acknowledging it. Everywhere he went people cheered his name like he was their champion, a black hero whose name mattered as much as his accomplishments in the ring. ‘Muhammad Ali is in Africa, all over Africa,’ he said later,” according to slate.com.

“The name is in Ethiopia, Morocco, Syria, Indonesia, Pakistan, Turkey, Algiers, Saudi Arabia. Muhammad Ali (was a common name) when I traveled Muhammad is the most common name in the world,” Ali said, as reported by slate.com.