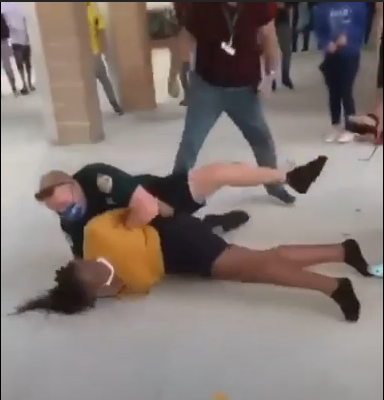 KISSIMMEEE, Fla.—The Florida Department of Law Enforcement will investigate the body slam by a school resource officer on a female high school student who appears to lose consciousness after her head hits the concrete in videos taken by other students, a Florida sheriff said Jan 27.

Osceola County Sheriff Marcos Lopez said his office was turning over the investigation of what happened between his deputy and a student at Liberty High School in Kissimmee to state investigators “to be sure no one can say that we are looking out for our own.”

“We will have … zero tolerance of any type of police misconduct,” said the recently-elected sheriff at a news conference. Osceola County is located south of Orlando.

In a video posted to social media, the deputy body-slams the student, whose head hits a concrete walkway with an audible thud. The deputy then pulls the student’s hands behind her back and places her in handcuffs. Other students watching what happened in the school’s outdoor breezeway cry out in shock.

Sheriff Lopez said neither the student nor the officer had any serious injuries and were “fine.” A spokeswoman for the sheriff’s office did not respond to an inquiry about the races of the student and deputy. The name of the student, who is Black, has not been released because she is a minor, reported the Orlando Sentinel. The sheriff said he chose to hand the case off to the Florida Department of Law Enforcement in the interest of “complete community transparency,” the newspaper reported. “But later in the day, agency spokeswoman Nirva Rodríguez would not answer when asked whether the minor had been charged with anything,” noted orlandosentinel.com.

The deputy, identified as Deputy Ethan Fournier, does not have any previous record of misconduct, other than minor property damage, Sheriff Lopez said without elaborating.

The sheriff’s office previously said in a news release that the deputy was trying to stop the student from fighting another student.

“The student was not complying with lawful commands,” Sheriff Lopez said Jan. 27.

Deputy Fournier, who has worked for the sheriff’s office for a decade, has been put on paid administrative leave pending the outcome of the investigation. He also has received threats since the videos began circulating on social media, Sheriff Lopez said. (Associated Press, Final Call staff contributed to this report.)