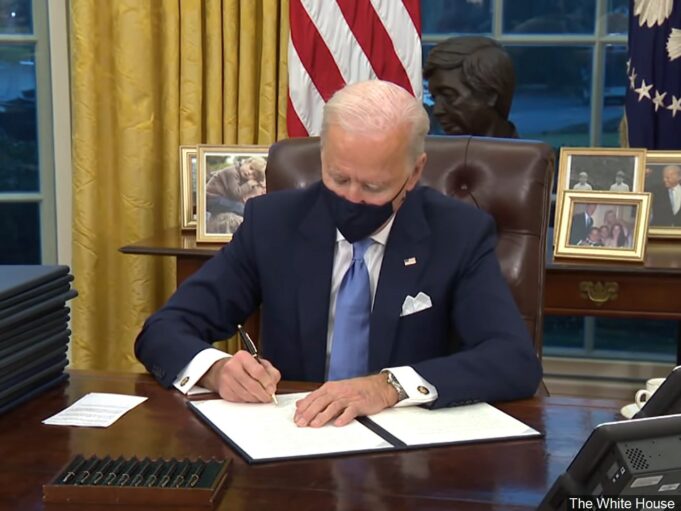 President Joe Biden’s executive orders that aim to put teeth, substance and administration support behind changing America’s racial equity, diversity and inclusion landscape are being applauded by some Blacks and their allies around the United States.

But running parallel to the possibilities this opening presents, is the reality not only of the intense and sometimes deadly challenges Black folks have faced for the 400 years they and their ancestors have been in this country, but also the daunting task that lies ahead. Up until this point in the nation’s history, racial equity, diversity and inclusion have been goals society aspires to, promises made but not kept, critics say.

However, it is incumbent that all those seeking substantive change in the racial dynamics and the complicated racial environment strike now that the opportunity has presented itself, they add.

“I do want to acknowledge that there is a lot that’s needed to be done quickly,” diversity, inclusion and equity expert Dr. Avis Jones-DeWeever told The Final Call. “There are some things Biden did off the top. I’m glad that he rescinded the 1776 Report and the Muslim Ban, which targeted Black Africans and Muslims. The administration plans to filter everything it does through an equity lens.”

Dr. Jones-Deweever said the executive order will only be ink on paper unless there is concerted pressure from activists on the streets and insiders who are talking and taking Black folks demands to meetings with administration officials. She said racial equity, diversity and inclusion only mean something if substantive change is embedded into education, employment, corporate boardrooms, government, small businesses, and every other sphere of American life.

“Biden’s top priority right now is the Covid relief package but in regard to us, defunding police, prisons and mass incarceration are very important. We also have to make sure that legislation goes through twice to pass the Voting Rights Act. I know that state legislators in Georgia and Arizona are already trying to put in place measures to make it more difficult for Black people to vote after what they saw in the presidential election,” she continued.

Dr. Jones-DeWeever, a political analyst, best-selling author and internationally recognized speaker, is one of many who contend that lawmakers at the federal, state and local levels must work with civil rights, civil society and other organizations and individuals to develop ways to reinvest in Black communities. Others have noted the importance of identifying those institutions and oppressive structural elements such as redlining; financial institutions that charge Black and Brown people higher interest; and real estate norms and policies that devalue homes and property of non-Whites to the tune of billions of dollars.

Jessica Fulton, vice president at the Joint Center for Political and Economic Studies, said she supports the Biden administration’s intention to make equity the centerpiece of its programs and policies. She adds that it will be critically important to quantify racial inequality and its effects on African Americans and other marginalized Americans.

“I think we have the opportunity to look at ways society disadvantages African Americans and communities of color,” said Ms. Fulton, whose responsibilities includes engaging in research and analysis to identify policies that advance the socioeconomic status of the Black community. “It’s encouraging that they plan to start measuring things. We can see the problems without data. But we need to quantify it.”

“… It’s not the most exciting thing to put measures in place but it’s helpful and necessary. Agencies have all been charged with looking at barriers to see where roadblocks might be. They will uncover some stuff that practitioners and the community might know and have thought about but politicians have not. It might be eye-opening.”

Researchers and staffers at the Institute of Taxation and Economic Policy, who characterize the executive orders as “groundbreaking,” agree with Ms. Fulton about the need to use data to explore the impact of policy on demographic groups.

“The Biden administration’s move last week to establish an interagency working group to examine how well data is broken down, or disaggregated, within public sector data sources is welcome news,” they said in an article titled, Disaggregating Data Illuminates a Path to Equitable Policy. The executive order specifically names the limited availability of datasets disaggregated “by race, ethnicity, gender, disability, income, veteran status, [and] other key demographic variables.”

The blog post notes that data will be able to illustrate “large disparities in income, wealth, homeownership and other measures of well-being are pronounced across race, gender and disability,” among other demographic factors, caused by “myriad historical injustices, ongoing discrimination and policymakers’ unwillingness to more aggressively harness policy to address these inequities.”

Ms. Fulton said there will be a great deal to unpack going forward. “I think one of the toughest barriers is the assumption that everyone is playing on a level playing field. The Black community as a whole isn’t disadvantaged because of individual behavior,” she said. “For hundreds of years, we had a system that intentionally treated Black folks differently and we can’t make laws that are targeted with race-neutral policies. We have to figure out the right solutions to structural racism and inequality.”

The administration’s pivot to racial equity and racial fairness comes at a time when the country is grappling with a racial and social justice reckoning. That all started last May when Minneapolis police officers killed George Floyd. His death triggered nationwide protests attended by millions of concerned citizens. Meanwhile, rightwing populists and White domestic terrorists have made it clear that they will use violence to hold onto the power they feel is slipping away.

The Advancement Project’s Judith Browne-Dianis acknowledged the difficulty of what social activists and the Black community face as they push to put flesh, so to speak, on the bodies of inclusion, diversity and racial equity.

“Those are all the things we’re trying to figure out,” she said with a wry laugh. “What he did Tuesday (Jan. 26) on racial equity and the criminal justice part of it was a reset to where were we before Trump. For example, phasing out private prisons and fair housing, those are resets. Okay thanks. We expected you would do that. The private prison piece is nowhere where we need it to be and mass incarceration exists most in public prisons and jails.”

Ms. Browne-Dianis—who joined the Advancement Project in 1999 and is its executive director—echoed Dr. Jones-DeWeever’s comments about the important of pressuring lawmakers and government on the streets and in the suites.

“I’m glad they are committed to equity,” she said. “It’s incumbent on us on the outside to make it what we want it be,” continued Ms. Browne-Dianis, an attorney, professor and voter’s rights expert. “Just like every administration, we know we elect someone who is our choice or not, and we have to push to be bolder and more audacious. How are we looking at issues and what do we want to put our focus on? There are lots of organizations meeting. It will be on movement people at the table pushing things that are important to move our community forward not to the survival part of it but thriving.”

She points to the Breathe Act, which was written by the Movement for Black Lives and introduced by Rep. Ayanna Pressley (D-Mass.), strengthening civil rights provisions and reintroducing the Voting Rights Act as issues needing the Biden administration’s immediate attention

“It’s big and lofty and a marker of where we have to go from here,” she said. Ms. Browne-Dianis said Black people are telling others seeking to speak for them that they can speak for themselves. “It’s a good development. The infrastructures of Black groups are better and stronger although we don’t have that many policy shops,” she said.

“I’m worried that a lot of people come to racial equity work because it’s sexy but who haven’t done it for a while. They’re coming up with their policy platforms, but this is a different moment where Black people are at the table calling the shots. It’s one of those things where funders and donors have funded White organizations because they think White people are smarter. But Black people have the ability to be truthtellers and tell their allies to step aside,” said Ms. Browne-Dianis.

“They are telling people we want to speak for ourselves.”