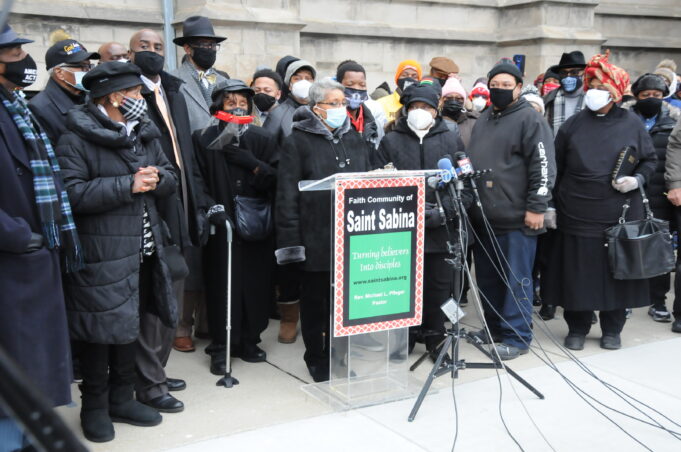 CHICAGO—Saint Sabina Church and supporters of Father Michael Louis Pfleger held a recent press conference in support of the Chicago priest after a second accuser came forward with allegations of sexual abuse from 45 years ago.

Father Pfleger, a longtime activist who has advocated for Black, Brown and poor communities and has been a constant voice condemning racism, police brutality and economic injustice for over 30 years, was asked to step down from the ministry by the Archdiocese in Chicago on Jan. 5 when the first of two brothers from Texas accused him of abuse that allegedly occurred over four decades ago. One of the brothers blamed his drug addiction and incarceration on the alleged abuse and demanded $20,000.

“While this may or may not be illegal, this request certainly seems like extortion,” said Minister Kimberly Lymore during the press conference. “At the forefront, our faith remains strong, our goals remain crystal clear and our purpose in this community, city and country is to continue to do justice, love mercy and walk humbly before our God.”

The Illinois Department of Children and Family Services is currently investigating the allegations.

“His critique against violence, racism, neglect of the poor, and even the role of women in the church has resulted in a myriad of enemies in government, church and the general public, but that has never stopped his ministry to the least of these,” continued Min. Lymore speaking about the activist priest.

“We believe that our Sr. Pastor will be fully exonerated from all accusation and we will stand with him during the process as he had stood with victims of injustice and will continue to uplift his work and the life, he has committed to serving others,” St. Sabina Church said in a Jan. 5 statement .

Father Pfleger responded that he was hurt by the allegations. “I am devastated, hurt and yes, angry, but I am first, a person of Faith, I Trust God. Please keep me in prayer and the Faith Community of St. Sabina. I have been asked by the Diocese not to speak out at this time. I am Blessed with good leadership and amazing members, whom I love. Pray also for the person, my life is more than a 40-year-old accusation, and on that and my Faith I will stand . . . The Lord is my Shepherd … I love you …” he wrote on Facebook Jan. 6.

“I thank all who are standing up and standing beside Father Pfleger as he goes through this great ordeal. May Allah protect him and all the members of St. Sabina for standing tall in this hour of trial. I stand with Father Pfleger and pray for his continued service to his congregation and to the total community that has benefited greatly from his presence and work among us,” said the Honorable Minister Louis Farrakhan of the Nation of Islam.