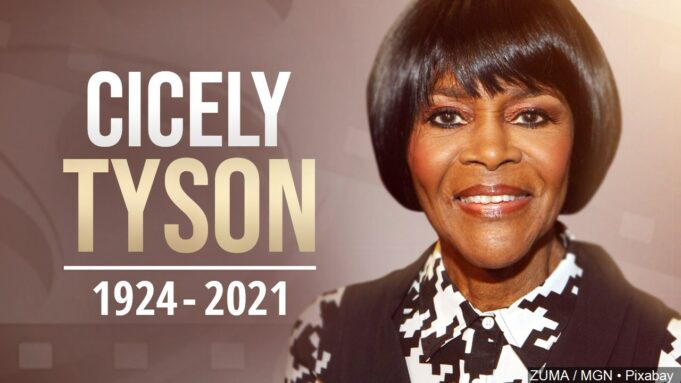 The world is remembering a true gem and entertainment trailblazer of film, stage and television in Cicely Tyson. The iconic Ms. Tyson whose brilliant career spanned over 70 years passed away Jan. 28. She was 96.

A captivating presence in the various roles she portrayed, Ms. Tyson is widely known for “Roots,” “The Autobiography of Miss Jane Pittman,” “Fried Green Tomatoes” and “Sounder.”

She won three Emmys, and many awards from civil rights and women’s groups. When she was 88, she became the oldest person to win a Tony for her 2013 Broadway role in a revival of Horton Foote’s “The Trip to Bountiful.”

She won a supporting actress Emmy in 1994 for “Oldest Living Confederate Widow Tells All.” She was nominated for Emmys several other times, including for “Roots,” “King,” “The Marva Collins Story” “Sweet Justice” and “A Lesson Before Dying.” In recent years, she was part of a panel discussion for “Cherish the Day,” an eight-episode OWN anthology series created and produced by Ava DuVernay. She played the mother of Viola Davis’ character on “How to Get Away with Murder.”

The sorrow of Ms. Tyson’s death reverberated around social media but people she impacted also paid homage to her everlasting legacy.

“I’m devastated. My heart is just broken. I loved you so much!! You were everything to me! You made me feel loved and seen and valued in a world where there is still a cloak of invisibility for us dark chocolate girls,” actress Viola Davis posted on Instagram.

“You gave me permission to dream….because it was only in my dreams that I could see the possibilities in myself. I’m not ready for you to be my angel yet. But…I also understand that it’s only when the last person who has a memory of you dies, that you’ll truly be dead. In that case, you will be immortal,” she added.

Ms. Tyson’s godson rocker Lenny Kravitz posted, “I constantly felt her spirit over me. She always gave me unconditional support,” via social media. “She came to my shows, came over for holidays, met me for dinners, stayed with me in Paris when I first moved there, and never let me too far out of her sight. Our phone calls went on sometimes for hours.”

William Hart of the famous singing R & B/soul group the Delfonics told The Final Call, “I would have liked for her to have used one of my songs in her movies.  Many of the geniuses of the 70s, we’re slowly passing away.  Her acting ability was so real.  It could make you cry and when actors can make you cry like that then that’s a great actress.”

Ms. Tyson’s parents moved from the island of Nevis in the Caribbean to New York, where Cicely was born in 1924, the youngest of three children. She is also a cousin of the Honorable Minister Louis Farrakhan of the Nation of Islam. Just two days before her passing, Ms. Tyson released her memoir, “Just As I Am.” Stay tuned for a full comprehensive tribute to this legend and pioneering trailblazer in next week’s edition of The Final Call.