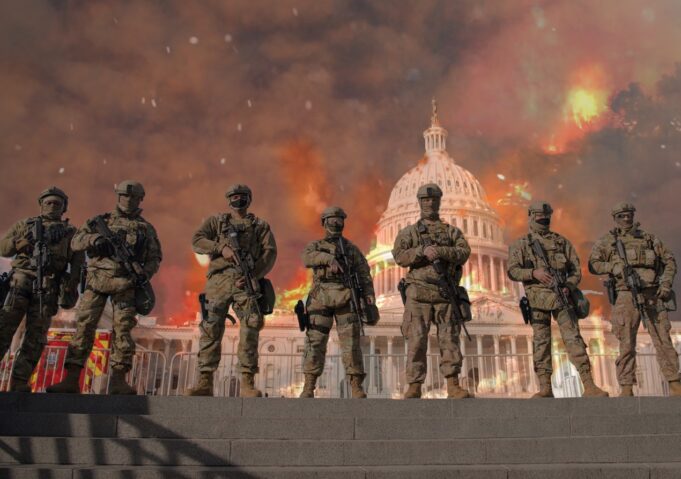 [Editor’s note: This article was originally published in Volume 13, Number 23, August 31, 1994. We reprint this article in light of the increasing demonstrations and anger of the American people against the policies of the U.S. government and police killings of Black people.]

And ye shall hear of wars and rumours of wars: see that ye be not troubled: for all these things must come to pass, but the end is not yet. For nation shall rise against nation, and kingdom against kingdom: and there shall be famines, and pestilences and earthquakes, in diverse places. All these are the beginning of sorrows.

This know also, that in the last days perilous times shall come. For men shall be lovers of their own selves, covetous, boasters, proud, blasphemers, disobedient to parents, unthankful, unholy, Without natural affection, trucebreakers, false accusers, incontinent, fierce, despisers of those that are good. Traitors, heady, highminded, lovers of pleasure more than lovers of God: Having a form of godliness, but denying the power thereof: from such turn away. For this sort are they which creep into houses, and lead captive silly women laden with sins, led away with diverse lusts, Ever learning, and never able to come to the knowledge of truth.

And at that time shall Michael stand up, the great prince which standeth for the children of thy people: and there shall be a time of trouble, such as never was since there was a nation even to that same time: and at that time thy people shall be delivered, every one that shall be found written in the book.

As we read this article, many wars are raging in different parts of the world, causing widespread death and destruction.

These wars have caused, and are causing, nations to be divided, North and South and East and West, tribe against tribe, one ethnic, racial or religious group against the other. These lines of division that have bred hatred between those of similar ethnic and racial origin are being fed by wicked external forces whose great desire in producing their idea of a new world order is to reduce the population of the people of the earth by several billion.

North Korea and South Korea; North Vietnam and South Vietnam; North Yemen and South Yemen; Northern Sudan and Southern Sudan; the various civil wars that are taking place on the African continent and among the people of the former Soviet Union are all signs that the wise should reflect upon. The Honorable Elijah Muhammad pointed out to us, from the Holy Qur’an, that when we see things from afar, know that they will soon come within our own borders.

The union of North and South Vietnam was accomplished through wars. It appears that the resolution of conflicts cannot be resolved through intelligent dialogue and discourse. The peace negotiations and agreements in the Middle East, though appearing wonderful on the surface, will only lead to more and more frustration and bitterness if real justice is not at the root of the peace.

The prophets of the Bible said, “The wicked shall seek peace, but they shall not find it. They shall say peace, but the result will be more war.” The reason for this is that the real way of Peace, which is submission to the Will of Allah (God), is not being adhered to.

The United States of America is moving closer and closer to great civil strife, unrest and bloodshed. Although the American people are supposed to be citizens of one nation, the division between labor and management is growing more intense. The division between the haves and have nots is getting wider and wider and that breach is being filled with hatred. The division between politics, right and left, so-called Christians, right and left, liberals, conservatives and all of the many causes that people are giving themselves to, whether social, religious or political, are now beginning to show signs of bloodshed.

People do not seem to be willing to argue their point and let truth prevail, but the frustration of arguments is leading to resolution of conflict by means of the gun. So, the weapons of war are being sold legally and illegally throughout the United States in unprecedented numbers. The proliferation of weapons of the assault kind are mounting in the Black and White communities.

Civil unrest in the future will not be able to be handled by the police. The police will be supported by the National Guard and the National Guard will be supported by federal troops. When this day arrives, and it will, the breakdown of law and order will be so great in America that it will be as the prophets foretold, “a time of trouble such as never was, since there was a nation even to that same time.” Blood, as John the Revelator saw, “will be running in the streets even up to the horse’s bridle.” This is a terrible prophecy, and it does not appear that it will be avoided or averted.

Gang conflict is small civil strife where we, of the same racial and historical origin, are now pitted against each other.

Our youth are dying in unprecedented numbers and, for the first time, death by the gun is nearly outnumbering death by disease. At a time when the Christian community with its many sects and denominations are struggling for unity within the Black community, those of us who have accepted Islam are now seeing the same evil forces at work, attempting to pit Muslim against Muslim.

Because of our varying degrees of understanding or misunderstanding, taking advantage of our differences and internal weaknesses with the desire in mind to promote civil strife and bloodshed among the Believers of Islam, Allah (God) says in the Holy Qur’an that, “He gives us the best argument.” If we believe that is true, then the Holy Qur’an teaches us to argue in the best manner and argue with justice, not mean spirited and not out of the spirit of hatred, but out of the sincere desire to see truth and right established.

However, personal desires and ambitions become frustrated and personal aims and aspirations for our group seem thwarted and we become disappointed, disaffected and alienated from the True Spirit of Allah (God). Then our frustration can be manipulated by outside forces to cause us to wreak havoc on ourselves and on one another to the joys of the enemies of Islam.

The most painful war America has ever fought was the Civil War, which pitted North and South against each other. It is 130 years from the conclusion of that war and, although a healing is taking place, many of the old scars still remain.

As Muslims in the West, we must be wiser and take lessons from those who have gone before us and do our best to resolve our differences in the way of Allah (God), never allowing Satan to cause a Muslim to shed the blood of another. If someone says that which we believe is against Islam, argue with them in the best manner. If they cannot prevail in argument and seek violent confrontation, then, and only then, should we think in terms of fighting with those who fight with us.

The Holy Qur’an and the example of Prophet Muhammad and the Honorable Elijah Muhammad and all sincere Muslims are before us. The prophet, Peace be upon him, loved his disbelieving family and members of his tribe. He never desired to spread the religion of Islam with the sword. However, when those of his own family and tribe, due to the hatred of his success, felt that he had to be killed and those with him had to be killed, it was then that he took up the sword and Allah (God) made him victorious over the disbelieving people.

Let us set an example for those who are caught up in civil strife. Let us resolve never to let Satan whisper into our hearts from among the jinn and the men, causing us, as it was in the past, to shed the blood of the righteous.

This is a warning to all who disagree with me and us: Do not let your disagreement and your hatred of my acceptance by the people and our increased popularity and success in accomplishing our goals and objectives for our people lead you to think in terms of doing physical harm to one another.

May Allah (God) bless us to help to end the civil strife among our people that we may become examples of peace in the midst of a world being destroyed through war.

Thank you for reading this article.