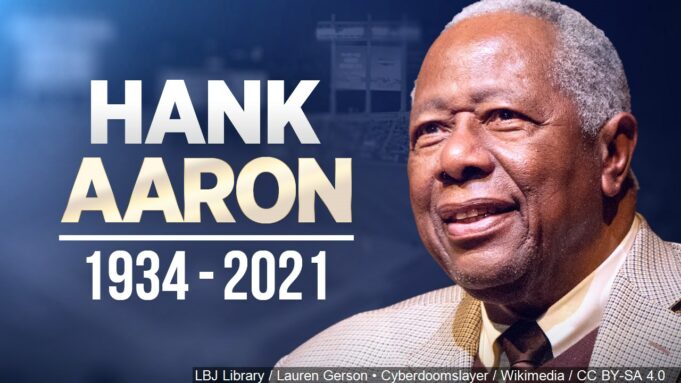 Baseball’s recognized home run king and an African American hero, Henry “Hank” Aaron, has died at the age of 86. Mr. Aaron, who broke Babe Ruth’s all-time home run record on April 8, 1974, was not just a baseball legend but a hero to superstars.

Mr. Aaron died in his sleep Jan. 22 reported the Atlanta Braves. On Jan. 5 he received his first dose of the Moderna Covid-19 vaccine. “I was proud to get the COVID-19 vaccine earlier today at Morehouse School of Medicine.  I hope you do the same!” the baseball legend said via Twitter.  Mr. Aaron, former UN ambassador Andrew Young and former U.S. Health and Human Services secretary Louis Sullivan were accompanied by their spouses and other civil rights leaders when they were vaccinated at the Atlanta-based HBCU, reported AP.

“He’s the one man that I idolize more than myself,” the late boxing legend Muhammad Ali once said about Aaron. While with the Atlanta Braves, Aaron tied Ruth’s mark of 714 homers on April 7. A day later, he slugged No. 715 against the Los Angeles Dodgers’ Al Downing.

Before and throughout his chase of Ruth’s longstanding record, Mr. Aaron was subjected to racism and hate. Death threats were common, and even some teammates and those throughout baseball despised Aaron as he approached their White hero’s record.

“A Black man is getting a standing ovation in the Deep South for breaking a record of an all-time baseball idol,” Dodgers announcer Vin Scully, who called the game, proclaimed as Mr. Aaron’s mother, family, and teammates greeted him at home plate.

Born Henry Louis Aaron on February 5, 1934, in a poor Black section of Mobile, Alabama, called “Down the Bay,” Hank Aaron was the third of eight children born to Estella and Herbert Aaron. Mr. Aaron’s father made his living as a tavern owner and a dry dock boilermaker’s assistant.

Mr. Aaron, who became known as “Hammering Hank,” developed a strong affinity for baseball and football at a young age and focused more heavily on sports than his studies.

Aaron first starred in the Negro Leagues in 1952 and again in 1953, batting .366, with five home runs and 33 RBIs in 26 official games. He began his Major League Baseball career in 1954 with the Milwaukee Braves and spent 23 seasons as an outfielder with Milwaukee— the franchise eventually moved to Atlanta.

Mr. Aaron finished his career with 755 home runs, a record topped by Barry Bonds of the San Francisco Giants in 2007.

Mr. Aaron’s biography at the Baseball Hall of Fame, where he earned induction in 1982, noted that he was “a consistent producer both at the plate and in the field, reaching the .300 mark in batting 14 times, 30 home runs 15 times, 90 RBI 16 times and captured three Gold Glove Awards enroute to 25 All-Star Game selections.”