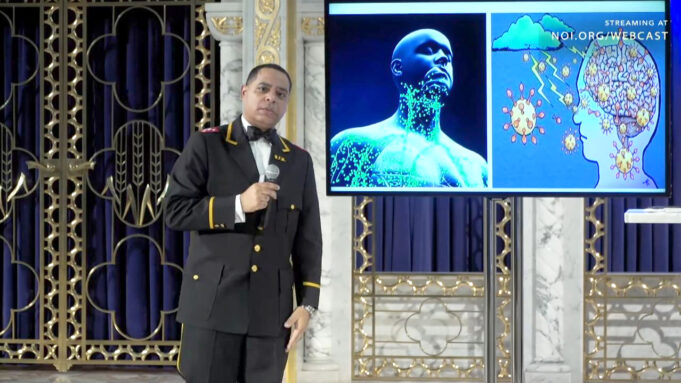 Media hype surrounding the Covid-19 vaccine continues as athletes such as Kareem Abdul Jabbar urge the public to take it. But during his July 4 lecture, “The Criterion,” the Honorable Minister Louis Farrakhan advised Black and Indigenous people not to take America’s Covid-19 vaccine, and he called it a “pestilence from heaven.”

One of his student ministers, Dr. Wesley Muhammad, on Jan. 17 delivered part two of his lecture, “Beyond Tuskegee: Why Black People Must Not Take the Experimental Covid-19 Vaccine,” a follow-up to a lecture he delivered on Jan. 10. Both lectures were delivered at Mosque Maryam in Chicago for the Nation of Islam’s weekly Sunday broadcast. During part two, Student Minister Muhammad expanded on the guidance of Minister Farrakhan.

“The Honorable Brother Minister Farrakhan revealed that judgment is not approaching; judgment has arrived. But those of us who believe in God, all of these days, months and years, we have known that the day of the Lord was coming, and some of us fretted over its eventuality. But one recent morning, we all woke up, and that day had arrived,” he said.

That day he is referring to is the day Covid-19 hit the world as a pestilence from heaven. With the pestilence of Covid-19 came experimental vaccines, which Student Minister Muhammad considered a part of America’s global depopulation plan. He referenced the U.S. government’s National Security Study Memorandum 200, put into effect by Henry Kissinger, who served as the country’s secretary of state from 1973 to 1977.

“Have you heard all of the talk of the new super mutations, one that appeared in the United Kingdom and another that appeared in South Africa? These new mutations, in them, I see, clearly the hand of Allah. These particular mutations, right when the Covid-19 vaccines were rolled out and the U.S. government was giving the world and in particular, Americans hope that the pandemic from heaven is about to come to a close,” he said.

Variants of the mutated strain of Covid-19 have also appeared in Brazil, Japan and America.

“The scientists that have studied these variants said this is unprecedented, and nothing about the natural evolution and the natural molecular mechanics of SARS-CoV-2 can explain these two variants having such a large number of mutations,” Student Minister Muhammad said.

A writer for National Geographic said of the mutations, “It’s as if the virus entered a dressing room and came out with a new outfit, rather than the normal circumstances where it would only change its hat.”

Student Minister Muhammad also touched on how Black people are hesitant to take the Covid-19 vaccine America is offering. According to a Nov. 30 to Dec. 8 survey, 35 percent of Black adults responded that they would probably or definitely not get a Covid-19 vaccine, even if it was determined to be safe by scientists and available for free.

“The U.S. government is investing all kinds of money and talent to overcome Black folks’ so-called vaccine hesitancy, because they want us to volunteer ourselves at the front,” Student Minister Muhammad said.

He said instead of using the term “vaccine hesitancy,” people should use the term “iatrogenocide” instead, which means genocide caused by medical treatment.

Student Minister Muhammad further explained the details of the National Security Study Memorandum 200, which included seven Muslim nations or nations that have large Muslim minority populations as targets. In 2003, five Northern Nigerian states boycotted the oral polio vaccine, which they said was contaminated with sterilization chemicals. About half the population of Nigeria is Muslim. Student Minister Muhammad listed several more instances where vaccines were not only linked to sterilization and anti-fertility agents, but they were also linked to HIV/AIDS. He stated that a medical team from the Walter Reed Army Medical Center discovered in 1987 that AIDS was “a vaccine-induced disease.”

According to a May 11, 1987 London Times article, then science editor Pearce Wright wrote, “The smallpox vaccine theory would account for the position of each of the seven Central African states which top the league table of most-affected countries; why Brazil became the most afflicted Latin American country and how Haiti became the route for the spread of AIDS to the U.S.”

After explaining the history of vaccines being used as biological and chemical warfare, Student Minister Muhammad stated that Operation Warp Speed, the U.S. government’s plan to speedily produce and distribute Covid-19 vaccines, was not a public health operation but a military one. He also talked about how Black faces are being used to convince Black people to take the vaccines.

Student Minister Muhammad ended the lecture by advising Black people to get out of the way between the war of Allah, God, and Satan, the devil.

“Follow the instructions, the divine guidance given to us by Allah through the Honorable Brother Minister Farrakhan that will help us avoid being a casualty on this divine battlefield. You don’t want to be caught up,” he said. “You don’t want to be a casualty in this war between Allah and Satan. Allah will win, but that doesn’t guarantee your and my life. Black America, we must not take the Covid-19 experimental vaccine.” (To view this message in its entirety and to view “The Criterion” visit noi.org).