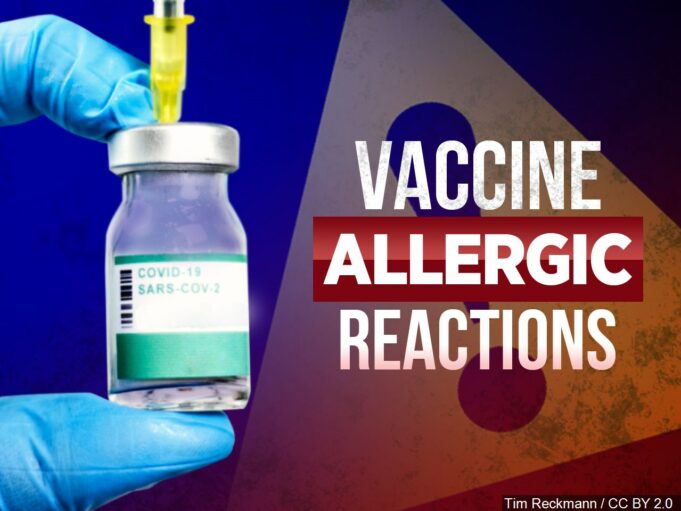 An effort to mandate or force acceptance of Covid-19 vaccines continues in the face of a refusal by Black, indigenous and others who are dead set against or worried about taking the experimental vaccines.

Reasons for concern were illustrated again as a leading California health official asked for a “pause” on use of a lot of Moderna’s experimental vaccine. A “higher-than-usual number of possible allergic reactions” to a coronavirus vaccine led California’s top epidemiologist to warn “health providers to delay using a batch of the Moderna COVID-19 vaccine” from a San Diego vaccination clinic, the San Francisco Chronicle reported Jan. 17.

“The affected lot includes 330,000 doses—roughly 1/10th of what the state so far has distributed,” said the Chronicle. “The reaction was observed in fewer than 10 people who required medical attention after receiving the vaccine at one clinic, state epidemiologist Dr. Erica S. Pan said in a statement.”

“The conditions of those affected were not released, but health officials described the allergic reaction as ‘severe,’ ” said the Chronicle.

“Out of an abundance of caution and also recognizing the extremely limited supply of vaccine,” read the statement from Dr. Pan, “we are recommending that providers use other available vaccine inventory and pause the administration of vaccines from Moderna Lot 041L20A until the investigation by the CDC, FDA, Moderna and the state is complete.” Health officials said they were still collecting information at Final Call presstime.

“Beneath the push for universal vaccine mandates is the partnership between the pharmaceutical companies and the U.S. government based upon the U.S. policy of depopulation and Big Pharma’s insatiable greed for profit,” stated Student Minister Dr. Ava Muhammad, national spokesperson for the Honorable Minister Louis Farrakhan.

“We are in the Time of Judgment. We have legal rights but we must look at Divine Rights. We have the right to refuse a medical intervention including the use of a vaccine that by definition is capable of injury or death. If the Constitution collapses in the unraveling of America it does not affect our Divine Right to life,” she stated.

“The polio vaccine developed by Jonas Salk contained a powerful, cancer-causing DNA virus; a transforming virus which was introduced as a pathogen into the human population. This virus, SV40, is found in human brain and bone cancer around the globe. Minister Farrakhan has called upon us to fight to protect the life Allah has given us,” she continued.

For now, the Covid-19 vaccine is not mandatory, but some companies and hospitals are using financial incentives to persuade cautious, hesitant employees to take it.

“In the Constitution, the Fourth Amendment is supposed to protect people from a violation of unlawful search and seizure. That has to do with a police action, but at a higher level, I would deem it to also apply to the human being itself,” he continued.

He said the case of the Covid-19 vaccine is unique because it has not yet been licensed as safe and effective by the Food and Drug Administration. “Not that we accept what they say, but their own process has not been followed,” he argued.

At this point, it would be very difficult to say the state would impose vaccines, but it would have to prove the vaccine is actually safe in order to impose it, make it a law, or use its powers under the health and safety and welfare provision to protect the citizenry, said Atty. Arif Muhammad. There would certainly be a legal challenge, he said.

Mandating Covid-19 vaccines under an emergency approval authorization is legally and ethically problematic, according to a Dec. 29 article published in the Journal of the Medical Association (JAMA). “The act authorizing the FDA to issue EUAs requires the secretary of the Department of Health and Human Services (HHS) to specify whether individuals may refuse the vaccine and the consequences for refusal,” it reads.

From a legal standpoint, although states are not legislatively mandating it, the U.S. Equal Employment Opportunity Commission (EEOC) has published what would be considered guidance to employers, suggesting that employers can mandate the vaccine. Read more carefully, it also mentions less restrictive or intrusive measures, said Atty. Arif Muhammad.

In addition to the EEOC, the landscape includes talk of possibly making taking the Covid-19 vaccine a requirement for people to fly, he noted.

He wasn’t yet aware of the EEOC guidance being applied in a broad base in an employment context, but in areas such as the healthcare industry, people have historically been asked to sign agreements that they would be willing to take a vaccine as a part or condition of employment. That’s whether hospitals or care facilities dealing with people who have health challenges, or nursing homes, but that normally happens during flu season he said.

“People need to be aware that if you’re considering to be employed somewhere, read very carefully what’s put in front of you, because if you sign it saying that you will and then now you say that you won’t, then it gives a predicate for them to say, ‘Well, this was a condition of your employment and since you’re now refusing, we have to terminate you.’ That becomes that type of an issue, so we have to be mindful,” cautioned Atty. Arif Muhammad.

Atty. Arif Muhammad revisited Minister Farrakhan’s July 4 message in which he challenged Attorney Alan Dershowitz, who threatened to have the constitutional rights of the American people stripped away by the state. Mr. Dershowitz actually said, “If you refuse to be vaccinated, the state has the power to literally take you to a doctor’s office and plunge a needle into your arm.”

Minister Farrakhan told Mr. Dershowitz that would be a declaration of war, and the Jewish lawyer falsely charged that his life was threatened. The Nation of Islam responded to Mr. Dershowitz, through written correspondence by Atty. Arif Muhammad on July 9, 2020. His letter was published in The Final Call on July 14.

“Your words prove the meaning of the Bible when it says, ‘Shall the throne of iniquity have fellowship with thee which frameth mischief by law.’ (Ps. 94:20 KJV). So when we’re dealing with this notion of a mandatory vaccine, it’s the wicked framing of mischief by law to deprive people of their constitutional rights,” said Atty. Arif Muhammad.

He stated, “Whatever the enemy plans, at some point, you have to decide where you stand in the matter.”

Some mandates pre-date the Covid-19, such as California’s 2016 law requiring all children to get the MMR (Measles Mumps Rubella) vaccine following a measles outbreak in order to attend public, private, and even religious schools.

“All of these types of discussions bring us to the constitutional challenge. So at this point, it’s talk … But now, how to enforce that and the ability to enforce that, is another question. But I refer back to what the Honorable Minister Louis Farrakhan said … and we have to then at that point, follow our conscience to save and protect our lives,” said Atty. Arif Muhammad.

The Milwaukee Journal Sentinel reported workers “at a Janesville nursing home risk losing their job if they do not take the COVID-19 vaccine, a policy that has caused outrage among many staff members. Officials at Rock Haven, a Rock County-owned facility, issued a memo in December telling employees that the vaccine was ‘a requirement for all staff’ and that employees who failed to get the vaccine would be laid off.”

The Journal Sentinel Jan. 15 said “a laid-off employee will not be eligible to return to work until they complete the two-dose vaccine regimen. Rock Haven officials have taken a hard line on vaccination, employees say, despite some employees’ concerns about unknown long-term effects or worries about their pregnancy or their fertility. …

“ ‘We have staff that are having side-effects from it, and they’re being told, ‘Too bad,’ she said. In letters to Rock County supervisors, two employees said they suffered high fevers and other side-effects from getting the vaccine on Jan. 5, the first day the nursing home conducted vaccinations. One of them wrote that the side-effects were so bad she had to go to the doctor and was advised not to get the second shot of the vaccine.

“Terra Anderson said she lost her job as a registered nurse when she didn’t report to receive the vaccine on Jan. 5. She was worried about unknown long-term effects of the vaccine. She later got a letter dated Jan. 6 telling her that she had been laid off for her ‘inability to meet the essential functions of your job; failure to complete the Covid-19 vaccine as scheduled,’ according to a copy of the letter provided by Anderson.”

Ms. Anderson said, “I don’t understand why we are the only ones who made it mandatory.” She also said “when she lost her job, she lost her health insurance.”

Nancy Messonnier, of the U.S. Centers for Disease Control and Prevention stated in a Jan. 6 press briefing after 21 people suffered life threatening allergic reactions, that anyone who has had an immediate or allergic reaction to the first dose should not receive the second dose.

According to Bloomberg, Norwegian officials said 23 people had died in the country a short time after receiving their first dose of the vaccine. Of those deaths, 13 have been autopsied, with the results suggesting that common side effects may have contributed to severe reactions in frail, elderly people, according to the Norwegian Medicines Agency.

Florida health officials are investigating the death of a doctor who took the vaccine. He reportedly suffered from an unusually severe blood disorder 16 days after getting Pfizer’s vaccine, according to the New York Times. It reported Dr. Gregory Michael, a 56-year-old obstetrician and gynecologist in Miami Beach got the vaccine at Mount Sinai Medical Center on Dec. 18.

There have also been reports of hormonal hot flashes, Bell’s Palsy which causes facial paralysis, and, anxiety, and fatigue.

A health care worker in Cass County, Missouri, who got Moderna’s vaccine in late December “blacked out and ended up on a ventilator,” indicates Kera Mashek, a Fox 4 Kansas news reporter.

According to Mashek Chavonya Littlejohn, who is Black, a health care worker at Belton Regional Medical Center, took the vaccine on Dec. 29. “Within minutes, her chest felt hot and she was itchy all over … her face and lips swelled up, and everything went black. Ms. Littlejohn woke up more than 30 hours later, hooked up to a ventilator in unfamiliar surroundings,” she said. The worker remained at Research Medical Center for three days.

Dr. Abdullah Hassan Pratt, an emergency medicine physician in Chicago, said over 95 percent of the patients he sees are Black people. He urged those who have opted out of the vaccine to practice good health habits.

He observed that many Black doctors have been silent on issues of health, mental health, violence, and lack of resources. The healthcare system didn’t have a campaign or support Black doctors who wanted to improve the health of their communities, then, and now it’s “too little too late,” he stated.