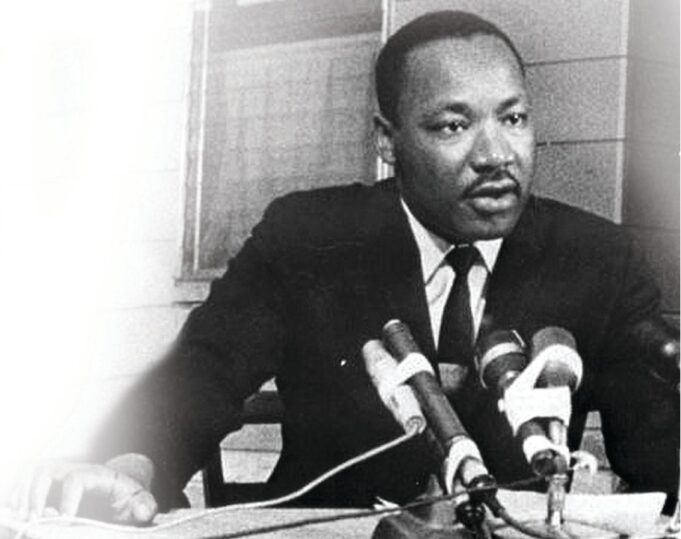 Every year we in the United States celebrate the life and legacy of civil rights icon Reverend Dr. Martin Luther King Jr. The celebrations frequently focus on Dr. King’s dream of ending discrimination in America. But those tributes rarely if ever mention Dr. King’s global, Pan African interests, which included attending the post-colonial inauguration in 1957 of Ghana’s newly independent government and the following year attending the inauguration of the first Nigerian head of state.

Reflecting on Africa’s independence from colonial rule, the Nobel Peace Prize laureate said, the road to independence should teach Black Americans “the oppressor never voluntarily gives freedom to the oppressed.”

Reading and researching Dr. King you discover reflection on Africa and the conflating of the African struggle for liberation and the African Diaspora’s movement toward “self-determination.”

A March 4, 1966 edition of Muhammad Speaks reported on one of two meetings between Nation of Islam leader, the Honorable Elijah Muhammad, and Dr. King. Mr. Muhammad said to the civil rights leader, “The world of white rule over blacks is at an end. America has no peace with any nation. There is growing disagreement. Our people want no more licking of the white man’s boots.”

Dr. King’s response to Mr. Muhammad was insightful. It displayed a knowledge of the similarities between the struggle in Africa and Africans in the Diaspora that was mostly missing in the civil rights movement’s narrative. “I know we are in absolute agreement on that. We suffer colonialism like the black people of Southern Rhodesia. We must achieve self-determination,” he said.

In a tape of Dr. King discovered in 2012, we again find the civil rights leader drawing connections between the U.S. and African independence.

According to Ray Winbush, director of the Institute for Urban Research at Morgan State University in Baltimore, the remarkable thing was King went to Africa at 31 years of age and we find him in Nigeria because he was invited to the inauguration by the country’s first head of state. “This means that he already had contact with African leaders, and was already making connections between their fight and his.”

During the interview King begins, “I just returned from Africa, a little more than a month ago.”

Giving a brief summary of his itinerary while on the continent, he said, “I had the opportunity to talk with most of the major leaders of the new independent countries of Africa and also leaders in countries that are moving toward independence.”

When discussing Africa always looking for an opportunity to include the plight of Black Americans, Dr. King added, “And I think all of them agree that in the United States we must solve this problem of racial injustice if we expect to maintain our leadership in the world, if we (U.S.) expect to serve as a moral voice in the world that is two-thirds colored (people of color).”

Some scholars, including PhD. candidate in Africana Studies Josslyn Jeanine Luckett of the Harvard Divinity School, have wondered out loud why there has never been much discussion or documentation of Dr. King’s interest in Africa? But in the same breath she wonders, but so much has been written about Dr. King’s trip to India and his reverence for Mahatma Gandhi, but not of Kwame Nkrumah who, by-the-way, overthrew the British Empire with a non-violent revolution.

There is King’s meeting and correspondence with Trinidadian scholar and Pan Africanist C.L.R. James, and support the Southern Christian Leadership Conference gave to various African independence leaders and scholarships for African students to study in the United States on top of his trips to Africa. As Luckett wrote, “Taken together, this information paints for me a brand new portrait of a diaspora (Dr.) King.”

Some associates said Dr. King didn’t return to the U.S. from Africa the same. The importance of his 1957 trip and significance of the independence of Ghana he chronicled during a part geography, part history lesson, with his sermonizing added as icing on a very filling and informative sermon.

Given at the Dexter Avenue Baptist Church in Montgomery, Alabama, it was titled: “The Birth of a New Nation.” Clearly eager to relate his African experience Dr. King recounted how the new Prime Minister Kwame Nkrumah of Ghana stood before his people and stated, “We are no longer a British colony, we are a free, sovereign people.” Then King confessed through his tears, “I stood there thinking about so many things. Before I knew it, I started weeping. I was crying for joy. And I knew about all of the struggles, and all of the pain, and all of the agony that these people had gone through for this moment.”

It was one thing for Dr. King to speak of unifying the African struggle with that of the African Diaspora, but the civil rights leader told members of the Alabama congregation to move to Africa and offer skills attained in the U.S. to the newly formed West African country.

“Yes, there is a wilderness ahead, though it is my hope that even people from America will go to Africa as immigrants, right there to the Gold Coast and lend their technical assistance. For there is great need and rich, there are rich opportunities there,” said King.

He added, “Right now is the time that American Negroes can lend their technical assistance to a growing new nation. I was very happy to see already people who have moved in and making good. The son of the late president of Bennett College, Dr. Jones, is there, who started an insurance company and making good, going to the top. A doctor from Brooklyn, New York, had just come in that week and his wife is also a dentist, and they are living there now, going in there and working, and the people love them … .”

Wrapping up his lengthy sermon, Dr. King told the attentive congregation, “Ghana has something to say to us.” Stating what’s needed to overthrow an oppressive regime he said, “It says to us first, that the oppressor never voluntarily gives freedom to the oppressed. You have to work for it. And if Nkrumah and the people of the Gold Coast had not stood up persistently, revolting against the system, it would still be a colony of the British Empire.”

He added, “Freedom is never given to anybody. For the oppressor has you in domination because he plans to keep you there, and he never voluntarily gives it up. And that is where the strong resistance comes. Privileged classes never give up their privileges without strong resistance.”

Dr. King refused to see colonialism abroad as separate from racism and White supremacy at home.

“There is no basic difference between colonialism and racial segregation,” he said.

During this year’s anniversary of the birth of Rev. Dr. Martin Luther King Jr. let’s look at his legacy as more than a civil rights leader. He is a leader whose contribution to the advancement to social change included uniting Africa with Africans in the Diaspora.