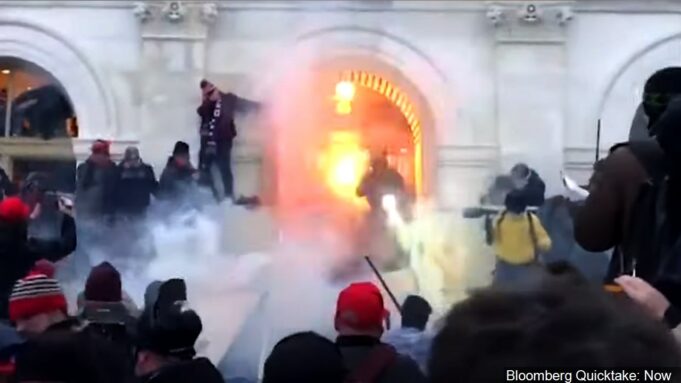 America is imploding and as the American people expressed shock, horror and indignation witnessing images of other Americans violently storm the U.S. Capitol building in Washington, D.C., to disrupt a democratic process; worldwide others were not as shocked. Various nations—friend, foe and in between—reacted to the assault on the world’s strongest military and economic power.

In the face of violent clashes, several dozen arrests, and five deaths, including a Capitol police officer, in the aftermath, the world witnessed a great nation unraveled; a president unhinged; and a meltdown of its veneer of stability.  “January 6, 2021 may turn out to be a turning point, not only in U.S. history, but world history,” said Dr. Gerald Horne, professor of history, at the University of Houston.

“It was very discrediting for the United States of America,” he added, as a world power that’s used to giving instruction about democracy to others,  and now given the fact there was violence to overturn an electoral result.

“It administers a black eye to U.S. imperialism,  and I think it also complicates relations with Europe,” explained Dr. Horne.  He told The Final Call the fallout with Europe will be deeper than a righteous indignation over a blatant challenge to democratic processes. Observers note the European Union is second only to China as a competitor of the U.S. for global hegemony.

“The EU has determined that Trumpism is a permanent part of the political landscape of the United States—even when he leaves office,” reasoned Dr. Horne.

If correct, the aftermath on the world stage would complicate the hope some expressed for the incoming Biden administration to mitigate the damage. “So, the prospects for U.S. imperialism moving forward is not bright,” said Dr. Horne.

Globally in some circles the negative turn for America was karma.  A case of what you have done to others, so shall it be done unto you.

“The violation of constitutional order and the disrespect for institutions promoted by President Trump to nullify the will of the voters is a replica of the shameful practices the U.S. has used against the rest of the world,” said Bruno Rodríguez Parrilla, Cuba’s foreign minister in a January 6 tweet.

Since the Cuban revolution that brought its late former leader Fidel Castro to power in 1959, Washington exercised a steady campaign for destabilization and regime change.  A Caribbean nation 90 miles south of the United States, Cuba has been the target of U.S. hostility, economic embargo, and internal meddling for 60 years.

President Nicolas Maduro of Venezuela whose country is also a target of unjust sanctions and heavy-handed U.S. foreign policy and regime change said, he hopes the U.S. finds its way to peace.

“How much damage Donald Trump has done to the people of the States?” said Mr. Maduro, in reaction to the discord. “Cease hegemony, cease cruelty, cease imperialism and let dialogue prevail!”  he added.

From the Islamic Republic of Iran, a harsher reaction came from the leader of the Islamic Revolution, Ayatollah Seyyed Ali Khamenei. “In 2009, the U.S. wanted to make Iran unstable. But that happened to themselves in 2020-21. You saw the people who breached the U.S. Congress,” said Ayatollah Khamenei.  “The Americans sought to do the same in Iran … create chaos and trigger a civil war,” he added.

Many leaders stated the insurrection showed that the U.S. has no moral right to punish other nations, under the guise of upholding democracy.

“In that vein, shouldn’t Mr. Pompeo consider applying some sanctions on himself?” she asked.

German Chancellor Angela Merkel expressed anger at the storming of the U.S. Capitol.

“Doubts about the election outcome were stoked and created the atmosphere that made the events of last night possible,” said Ms. Merkel. She said her outrage is shared by “millions of people who admire America’s democratic tradition.”

British Prime Minister Boris Johnson, who was a Trump ally said Mr. Trump was “completely wrong” to encourage his supporters on to the Capitol.

“And as you say, as you suggest,” said the prime minster to reporters, “In so far as he encouraged people to storm the Capitol and in so far as the president consistently has cast doubt on the outcome of a free and fair election, I believe that that was completely wrong,” he said.

Others called for America to take the higher ground. “Democracy—the right of people to exercise a vote, have their voice heard and then have that decision upheld peacefully should never be undone by a mob,” tweeted New Zealand Prime Minister Jacinda Ardern. She expressed that in the end democracy will prevail.

The U.S. has a reputation lecturing the nations of the earth on human rights, and democracy, replete with an air of entitled moral authority.  Historically she wasted no opportunity to impose a self-serving view of  “American Exceptionalism” which some voices like the Honorable Minister Louis Farrakhan of the Nation of Islam has called an “exceptional lie.”

The truth of America was the disparity and injustice toward the Black, Brown, and Red people as well as poor White. “American democracy, unfortunately, has always leaned toward and protected the interests of the White, the Rich and the Powerful,” said Minister Farrakhan in a November 2018 statement to the American people.

The Muslim minster has lifted his voice at various times to say no foreign enemy will destroy America. “She faces an internal rot,” Minister Farrakhan said. She is imploding from huge fiscal deficits, a fractured political system, an ugly political and public discourse; and frayed social networks. “She is a troubled nation,” with spiritually blind leadership, he said.

The Jan. 6 insurrection of predominately White supporters of outgoing President Trump that attempted to overthrow election results of his loss, exposed a hypocrisy of America that has always been. It exposed malign behavior of a leader in a country that worked hard to conceal such from the world.

A joint statement from U.S. House Foreign Affairs Committee lead Republican, Michael McCaul (R-Texas), and Chairman Gregory Meeks (D-NY) said the violence at the Capitol “scarred our reputation” and “damaged our standing” in the world.  The lawmakers said the “violent insurrection” will “empower dictators and damage struggling democracies.”

Some analysts who spoke to The Final Call on the matter called it a “criminal act” that would fall under the seditious conspiracy laws. Many condemned the action of “White supremacist fascists” and blamed President Trump for agitating and encouraging a rally crowd to converge on the Capitol Building while lawmakers was certifying President-elect Joe Biden.

Contested elections in America are not new. However, the disputes have usually been handled in the court system, such as in 2000 when the victory of George W.  Bush was disputed by his opponent Al Gore.  But to force change and take power by unconstitutional means, including violence is insurrection or a Coup d’état.

“The fact that it was disorganized and failed,  does not in slightest change the fact that it was an effort at fascist insurrection to keep Trump in power, ” said Brian Becker, the national coordinator for the anti-war A.N.S.W.E.R.  Coalition.