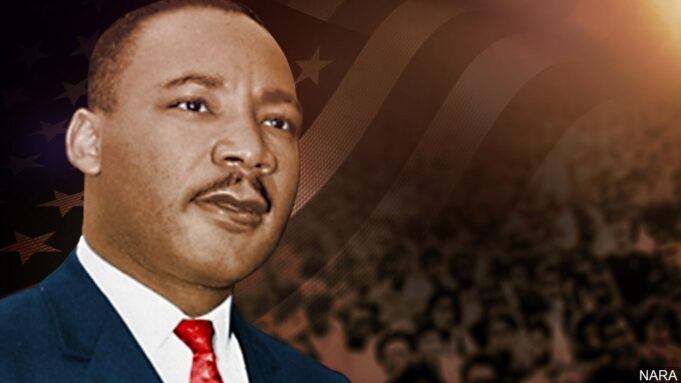 ‘The distortion of his legacy begins with a focus on him as an individual and not the movement he championed. The second is the myth that the injustice and racism he challenged have since been eradicated.’

The Reverend Doctor Martin Luther King Jr. was a man that evolved. He was much more than the “Disneyfied” version often portrayed that starts and stops as a civil rights torchbearer as espoused through his “I Have a Dream” speech. Dr. King evolved into a philosopher and keen visionary with a platform including equality, justice, and freedom. He became the champion of the poor.

The King that was assassinated in 1968 is more relevant today than he was then. He is relevant to the Black Lives Matter Movement and every facet of social justice reform, from defunding police to a just economic system with an emphasis on repairing Black lives. Martin Luther King was radical in his thinking. That is the King historical revisionists don’t want to know.

The distortion of his legacy begins with a focus on him as an individual and not the movement he championed. The second is the myth that the injustice and racism he challenged have since been eradicated. The third is putting the significant problems of racism and injustice in the past.

In watering down and obscuring the complexity and controversial aspects of his life was the impact of the groundbreaking meeting held in February 1966 with the Honorable Elijah Muhammad, patriarch of the Nation of Islam.

“After he was gone, the memory of King taking the struggle to Chicago, railing against the Vietnam War and economic injustice, emphasizing what was true in the Black Power movement, and organizing a Poor People’s Campaign faded into an unthreatening idealism. King became safe and ethereal, registering as a noble moralist. It became hard to remember why, or even that, King was the most hated person in America during his lifetime. But the King that we need to remember is the one who keenly understood what he was up against,” writes Gary Dorrien, author of  “Breaking White Supremacy: Martin Luther King Jr. and the Black Social Gospel.”

King strongly criticized America’s bigoted form of capitalism that “gives luxuries to the classes and takes necessities from the masses.” He stood firmly with unions, which he called the most vital antidote to poverty. In his Poor People’s Campaign, he sought to reorder our national priorities from funding war, tax cuts, and bailouts for the rich to ensuring every person the opportunity for a good education, health care as a human right, a decent job, and a viable income. In Memphis, he called for “economic equality” and died fighting for workers to have union rights, writes Michael K. Honey, author of “To the Promised Land: Martin Luther King and the Fight for Economic Justice.”

Over time in his evolution, Dr. King began to see that politics was not the end-all to be all for Black people, notes Shayla C. Nunnally, author of “Trust in Black America: Race, Discrimination, and Politics.”

“King’s optimism about democratic political institutions, however, declined over time, as he witnessed the increasingly violent opposition to racial justice, complete with challenges to the scope of federal power over state governments. Nonetheless, King’s assessments of the American political system speak to his perceived belief (eventually a reluctant belief) in the American political system to advance racial justice,” she wrote.

In obtaining a proper perspective on the length and breadth of Dr. King’s work and shaping an accurate narrative, the Nation of Islam Research Group in an article previously published in The Final Call, noted: “The Honorable Minister Louis Farrakhan has asked all people to study the last speeches of the Rev. Dr. Martin Luther King, Jr., and to reflect on the evolution of his message—from one of an integrationist ‘Dreamer’ in 1963 to one of a true wide-awake revolutionary in 1968 when he was murdered.”

“It is clear that Dr. King began to consider The Teachings of The Most Honorable Elijah Muhammad had profound relevance to the struggle for Black freedom in America. Dr. King and his wife Coretta met with the Honorable Elijah Muhammad at his Chicago home on February 24, 1966. Privately, Dr. King indicated a true shift in his belief that the pursuit of ‘integration’ through a ‘non-violent’ civil rights struggle would be the answer to the righteous demands of his oppressed people,” the article stated.

In the last days of his life, Dr. King confided in his friend Harry Belafonte: “I’ve come upon something that disturbs me deeply. We have fought hard and long for integration, as I believe we should have, and I know we will win, but I have come to believe that we are integrating into a burning house,” he said.

“I’m afraid that America has lost the moral vision she may have had, and I’m afraid that even as we integrate, we are walking into a place that does not understand that this nation needs to be deeply concerned with the plight of the poor and disenfranchised. Until we commit ourselves to ensure that the underclass is given justice and opportunity, we will continue to perpetuate the anger and violence that tear the nation’s soul. I fear I am integrating my people into a burning house,” Dr. King explained.

Following the meeting with Messenger Muhammad, a dramatic shift occurred in Dr. King’s thought process and activism. Mr. Belafonte writes Dr. King’s systems analysis could only frighten the American elite. “The trouble is that we live in a failed system. Capitalism does not permit an even flow of economic resources. With this system, a small privileged few are rich beyond conscience, and almost all others are doomed to be poor at some level….That’s the way the system works. And since we know that the system will not change the rules, we’re going to have to change the system,” noted Mr. Belafonte.

In the lead-up to his Poor People’s Campaign, Dr. King told Black people in a speech not long before his assassination, let us go to Washington “to get our check.” Dr. King gives a rebuttal to the “bootstrap” theory that suggests that all hard work is rewarded with success. He explains that economic disparities worsened when the federal government provided land and subsidies to poor White people as far back as the 19th Century but ignored Black citizens.

Sounding more like the Black Muslims than the Black Muslims, there was one speech that includes loud messages about self-love. Dr. King encouraged Black people to seek their own liberation; he talked about Blackness and urged them to proclaim, “Yes, I’m Black. I’m proud of it. I’m Black and beautiful.”

“On the day before his assassination, King made the rousing speech ‘I’ve Been to the Mountaintop’ at Bishop Charles Mason Temple in Memphis, Tennessee.  He’d returned to Memphis to support the Sanitation Workers’ Strike. Here, he recounted the threats against his life while vowing to continue championing labor rights. But what’s often overlooked in this speech is his reminding Black citizens to support Black-owned businesses and boycott those that don’t acknowledge their humanity. He calls out specific large companies and banks in Memphis because of their discriminatory hiring policies,” writes Teaching Tolerance.

Dr. King’s radicalism must not be confused with today’s extremism. He was radical because he called for a humanistic change in a society that holds individualism, and rabid capitalism sacred.

Rather than define him as radical, Philadelphia social activist Bilal Qayyum told The Final Call, he preferred to portray Dr. King as a revolutionary.

“I think he’s a revolutionary, and I really truly mean that. I think that Dr. King was really about changing the social order of America. His call for social justice, economic equality, medical care for all. Dr. King was about more than ‘overcoming,’ he was about turning over the tables and turning society around.”

Imam Abdul Malik, a noted New York-based cleric told The Final Call, Dr. King was a revolutionary in his spirit. “He made the intention to commit his life to the liberation and the rise of his people and made the ultimate sacrifice. And I believe that Dr. King was a warrior and a strategist,” Imam Malik said.

“Dr. King evolved to become America’s conscience. He dramatized before the world the condition of Black America and the aggression of the White supremacy institutions. He would antagonize the system, knowing how they would respond. So, I think that he was a man of vision, of devotion, he was a warrior, and he paid the ultimate price in pursuit of freeing his people. I always said he was the only King America has ever had,” said Imam Malik.

“Dr. King’s final days, months and weeks leading up to his assassination were spent speaking more and more about the immorality of the Vietnam War, equality, a higher standard of living for working families, better schools, free universities, less poverty, adequate housing, stronger unions, universal health insurance, economics, a redistribution of income and things like that. Those were the things that made Dr. King particularly dangerous to the status quo,” Imam Amin Nathari, author of “The State of Islam in Black America,” told The Final Call.

“Dr. King became unreliable. He began to think outside the box. He couldn’t be counted on to do their bidding …  At a certain point, he became unreliable to those people who thought that they had fully co-opted him into taking the approach that was opposite of Malcolm, Elijah Muhammad,” he added.

The daughter of Martin Luther King, Bernice King, reflecting her father’s insight, recently observed on Twitter, “I believe we need something much deeper, much more comprehensive in uprooting systems, and far more transformative than ‘reform.’”