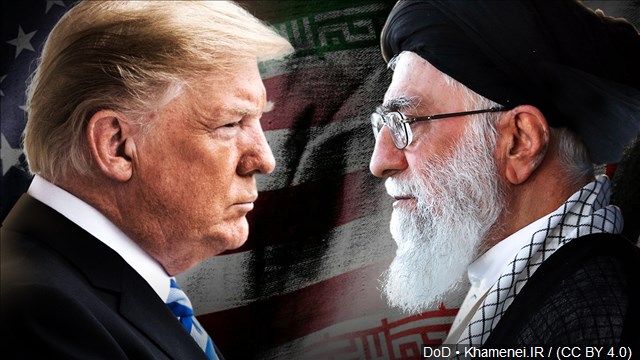 American geopolitical friction against the Islamic Republic of Iran worsens, even as the U.S. has come under heavy domestic strain with open insurrection at the U.S. Capitol around election disputes from outgoing President Donald J. Trump.

The U.S. Capitol was breached by supporters of Mr. Trump as lawmakers were deliberating on the certification of election results to confirm President-elect Joseph Biden, who defeated Mr. Trump in November elections. Some are calling the move an attempted coup d’état instigated by Mr. Trump to overturn his defeat, which he maintains was fraudulent.

Meanwhile reactions from world leaders included Tehran where U.S. hostilities have increased in recent days. “I hope this would be a lesson for the whole world and also for the next rulers of the White House,” said Iranian President Hassan Rouhani in remarks Jan. 7.

He criticized the U.S. as a nation with an inordinate lean toward populism, and the insurrection a sign of the weakness within Western democracies.

“We have seen what damage a populist person has inflicted upon his own country in the last four years, bringing disgrace upon his nation while also inflicting great damage on our region, on Palestine, Syria and Yemen,” Mr. Rouhani said, referring to Mr. Trump.

America’s domestic turmoil came in the last two weeks of Mr. Trump’s rule, and days after America intensified a military threat on Iran. Iran is on red alert after the U.S. reversed a decision on Jan. 3, to remove an aircraft carrier for the Middle East under the guise of alleged Iranian threats on Mr. Trump and U.S. officials.

The acting U.S. secretary of defense Christopher Miller ordered the USS Nimitz, operating off the coast of Somalia, to remain in place after ordering it back to its Washington State homeport, just one day before.

“Due to the recent threats issued by Iranian leaders against President Trump and other U.S. government officials, I have ordered the USS Nimitz to halt its routine redeployment,” said Mr. Miller. “No one should doubt the resolve of the United States of America,” he stated.

The two foes have been on the verge of war for four years triggered by a U.S. “maximum pressure” campaign to destabilize Iran.

“They’re trying to provoke Iran,” Nation of Islam Minister Louis Farrakhan has cautioned in the past. The Muslim leader has visited Iran twice in recent years. Min. Farrakhan has been unflinching in warning U.S. presidents to cease their warmongering in the Middle East, and plotting regime change and assaults on Iran. War with Iran will be a catastrophic conflict the U.S. cannot win, Min. Farrakhan has said.

U.S. officials said the redeployment of the ship was a “de-escalatory” signal to Tehran to avert a crisis in Mr. Trump’s waning days in office, reported the NY Times.

However, the Nimitz’s departure comes days after the U.S. flew strategic B-52 bombers within 60 miles of the Iranian coast. In addition, the Navy announced “for the first time in nearly a decade” that it had ordered a Tomahawk-missile-firing submarine into the Persian Gulf.

“The pentagon is well aware that people in Iran are still insisting that there be retaliation for the criminal murder of General Soleimani,” said Brian Becker, national coordinator for the anti-war A.N.S.W.E.R.  Coalition. “At the same time resistant forces in Iraq are intensifying their efforts to evict American occupiers from their country,” added Mr. Becker.

He said the pentagon fears, that Iraqi resistant forces or the Iranian government will do something to demonstrate Iran’s political and military capabilities. However, he reasoned, sending the Nimitz back is not really about anticipating some new American attack on Iran, but rather a show of strength targeting those resisting U.S. occupation in the region.

“If the U.S. and Iran were to go to war … the war would resemble what happen in the U.S. war in Vietnam … meaning the U.S. will be decisively defeated in that kind of regional war,” said Mr. Becker.

The pentagon recognizes that U.S. power has been severely limited in the region. Mr. Miller said the USS Nimitz will remain stationed in the U.S. Central Command (CENTCOM) area of operations, which encompasses the Middle East, Egypt in North Africa, Central Asia, and parts of South Asia.

Tehran officials said they are monitoring the move very closely and accused the U.S. of being a longtime source of upset in the region.

“The measures and movements and certain mischievous acts of the United States are not hidden from our eyes,” said Foreign Ministry spokesman Saeed Khatibzadeh, Jan. 4.

“Our intelligence, security and military organizations are fully aware of the ostensibly secretive movements of the United States in the region and in Iraq,” he added.

“Fortunately, Trump’s presidency has ended. But even if his term hadn’t … it would be unacceptable to say someone shouldn’t be accountable to law,” said Mr. Raisi.

Mr. Soleimani was a national hero, lauded for masterminding the defeat of terrorist forces like ISIS in the region, and a revered resistance figure against foreign domination by America and Israel. Iranian officials say killing Mr. Soleimani opened the door wider for terrorism. Marking   the anniversary, Iranian Foreign Minister Javad Zarif condemned the U.S. and characterized Mr. Trump, a chief terrorist.

“A year ago today, Enemy #1 of extremist terrorists was cowardly assassinated by the terrorist-in-chief,” Mr. Zarif tweeted Jan. 3. “The only beneficiary of his murder is Daesh (ISIS), which has only increased its activity since,” he said.

Analysts have told The Final Call American Middle East policy is building a regional coalition against Tehran with Israel and Saudi Arabia at the core.

Meanwhile, Tehran announced resuming enriching 20 percent uranium at its Fordow nuclear facility, which caught the ire America, the European Union, and Israel. A move that experts say waxes against the 2015 nuclear pact between world nations and Iran, and a deal Mr. Biden pledged America to rejoin.

Tehran maintains that its steps are reversible as soon as the U.S. and Europe return to their own commitments under the deal, reported Al Jazeera.

“Under Trump’s watch, the U.S. has marched to the edge of war, ended comprehensive limits on Iran’s nuclear program, and punished the Iranian people with crushing sanctions amid a pandemic,” said Ryan Costello, policy director for the National Iranian American Council in a Jan. 4 statement. “It is a track record of total failure,” he said.

In the wake of military escalation to send a message to Iran, it is no surprise Tehran would accelerate expanding its nuclear program, although they consistently maintained for humanitarian purposes.

“It is imperative that any movement toward an illegal, unauthorized and disastrous conflict with Iran amid a devastating pandemic be decisively halted,” said Mr. Costello.