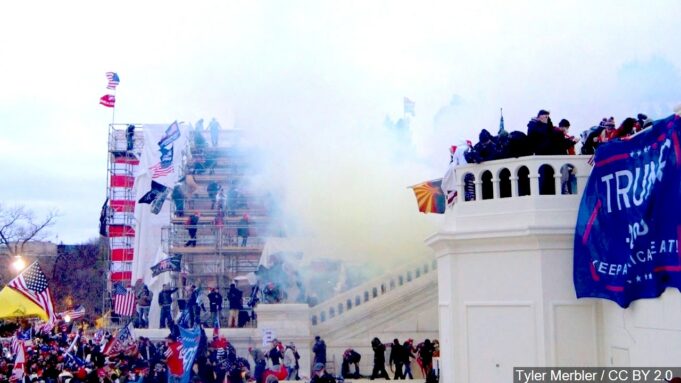 WASHINGTON—After a combative three years and 50 weeks of his four-year term in office, Donald J. Trump who appeared to govern as though there were no boundaries restraining him, virtually ended his effective time in office Jan. 6.

His critics and some of his former Republican allies alike charged him with treason, sedition, and inciting a tumultuous uprising, as thousands of his followers stormed and desecrated the U.S. Capitol on his command, in what some of them declared was a “revolution” to maintain his presidency.

The insurrection was intended to disrupt the certification by a Joint Session of Congress, of the Electoral College count which proclaimed former Vice President Joe Biden to be Mr. Trump’s successor as 46th President of the United States on Jan. 20.

Instead, on his 1,448th day in office, Mr. Trump’s followers engaged in a wild melee during which at five deaths—including a Capitol Police officer who was killed in the line of duty—were recorded, dozens of protestors were arrested, and the seat of the U.S. government was defiled by marauders who disrupted the ordinarily routine vote certification session, terrorized Senators and representatives alike, looted offices, and defecated and urinated in the halls of Congress.

For hours, Mr. Trump even refused to permit the mayor of Washington to deploy the District’s National Guard, and he withheld the use of FBI or personnel from any of the other two dozen law enforcement agencies to help put down the uprising.

Not since the War of 1812 had the U.S. Capitol been under siege. Never during the bloody Civil War had the treasonous Confederate battle flag flown inside the Capitol. But Mr. Trump’s followers sacked the Senate chamber and leadership offices, including that of the Speaker of House.

“Certainly, you recall that during the War of 1812 when Britain burned down the Capitol and sent President Madison storming to the streets,” Dr. Gerald Horne, professor of History and African Studies at the University of Houston told The Final Call.

“But we’re in unchartered waters right now. And of course, we have to take this ultra-right wing, fascist threat quite seriously. Many people, including myself before today were talking about how January 6 was going to be a pivotal day.

“Mr. Trump, some weeks ago suggested that the events would be quote “wild” unquote. So only the naive or the unprepared would not anticipate the tumble that’s unfolded on the Capitol grounds. And finally, it seems we have to take quite seriously the possibility of some sort of complicity with regard to the leadership of the Capitol Police,” he said.

Indeed, Capitol Police Chief Steven Sund, who was forced to resign in the wake of the disturbance, complained that his superiors—the Sergeants at Arms of both the House and the Senate, and the Architects of the Capitol for the House and the Senate—refused his request for backup forces in the face of what had been openly predicted to be a possibly violent confrontation. The preparation for this was clearly inadequate compared to the extraordinary security measures when peaceful protests by Black groups took place.

“It kind of hits me in the gut the way the Million Man March was handled in terms of security and the Black Lives Matter,” a retired Capitol Police officer, who asked that his name not be used because he still works with the agency told this writer.

“Every time that a person of color is coming on the Hill, they make sure they go through every effort they can. But once again, with this political football being like it is, the President is the one that goes along with the district in terms of calling out the National Guard.”

And Mr. Trump and the Pentagon top brass ignored the request by District of Columbia officials to call out the D.C. National Guard which had already been mobilized.

But Mr. Trump’s anti-democratic behavior was nothing new. Before the social media platforms Twitter and Instagram permanently deleted Mr. Trump’s accounts, had been relentless. During his term he sent more than 57,000 tweets to his 88 million followers. In addition, he made more than 25,000 false or misleading statements according to the Washington Post.

One Capitol Police officer was killed in the line of duty, trying to hold off the assault, and another officer committed suicide later. A woman trying to climb into the Capitol building through a window was shot to death possibly by a Secret Service officer, and three other people died because of reasons not disclosed by Capitol officials.

Rep. Cori Bush (D-Mo.) proposed unseating House members who encouraged the takeover, citing a clause in the 14th Amendment. “The United States Constitution says that ‘no Person shall be a Senator or Representative in Congress’ who ‘shall have engaged in insurrection or rebellion against’ the Constitution, ‘or given aid or comfort to the enemies thereof,’” she said in a statement citing the provision written to prevent former Confederate rebels from serving in Congress after the Civil War.

Mr. Trump’s followers erected gallows on the Capitol grounds and some appeared to be ushered by Capitol Police. One policeman even posed for “selfies” with the invaders.

She addressed comments to Mr. Trump directly. “Your continued excusal and denial of Wednesday’s Neo-Nazi presence is abhorrent and dangerous. The most healing and unifying thing *you* can do is take responsibility for your actions and resign,” she said in response to Mr. Trump’s appeal for unity going forward.

During the rebellious takeover of the Capitol, many chanted “Hang Mike Pence,” according to recordings made by reporters and others inside the Capitol. They were reportedly upset because Mr. Pence would not attempt to illegally disregard the Electoral College vote results and declare Mr. Trump president for a second term.

And while a Reuters public opinion poll revealed that 56 percent of the public did not approve of the takeover, 45 percent of Republicans think the occupation was a good thing. That is a huge population, 70 million people, young, old, rich and poor, but mostly White, voted to reelect Mr. Trump.

Mr. Trump must own his culpability in the chaos, many political leaders insisted. “The man directly responsible for the chaos of today is Donald Trump, who has made it clear that he will do anything to remain in power–including insurrection and inciting violence. Trump will go down in history as the worst and most dangerous president in history,” Sen. Bernie Sanders said, via Twitter the night of the takeover.

For that reason, articles calling for Mr. Trump’s second impeachment were introduced by several Democratic members of the House. Their purpose is to prevent him from being able to run for office again, to deny him a pension, future Secret Service protection and an office staff.

Some Cabinet officers were reported to quietly discuss invoking the 25th Amendment to the Constitution which allows for the president to be removed from office if he is deemed physically, or mentally incapable of leading the government, but Mr. Pence, who would have to invoke the provision was reportedly unwilling to try to remove Mr. Trump.

Mr. Trump’s attempted coup, not only undid his political and financial support—several corporations and political donors promised to no longer support Mr. Trump or any of the legislators who supported his baseless attempts to undo the will of the voters—it rocked the foundation of the government itself, according to Mr. Steele.

“‘We the people’ are the three most powerful words in all of our founding documents to me,” the former Lt. Gov. of Maryland said. “It matters that we embrace those words at this hour. Because if it’s just about me, as Donald Trump wants it to be just about him, then we’re no better than some two-bit country that doesn’t care for its citizens and concentrates its wealth in the hands of criminals.

“I know some believe that’s what we do in this country, but you and I know and I think a lot of us know that that’s not our mission and that’s not what we’ve been about.” But progressive activists disagree.

“If you were shocked and horrified by what you saw happening at the Capitol yesterday, just remember the United States has been involved in the violent overthrow of governments in 12 countries in the past 30 years alone,” CODEPINK’s Medea Benjamin said via Twitter.

“The fact that more members of the national guard blocked the road to Standing Rock (Indian Reservation) than there were outside the coup at the Capitol today speaks volumes about this country,” the tweet said.

“So, there’s work ahead,” Mr. Steele conceded. “There’s no doubt about that. There’s work ahead, but I believe in ‘We the people,’ I believe the people of this country recognize now more than ever with the shock of what happened on Wednesday in front of them, that, ‘Yeah, we got something at stake here.’

“The question that has to be answered is whether or not it’s going to be enough to fight for, and (if) they want to get on to the other side of all of this.”