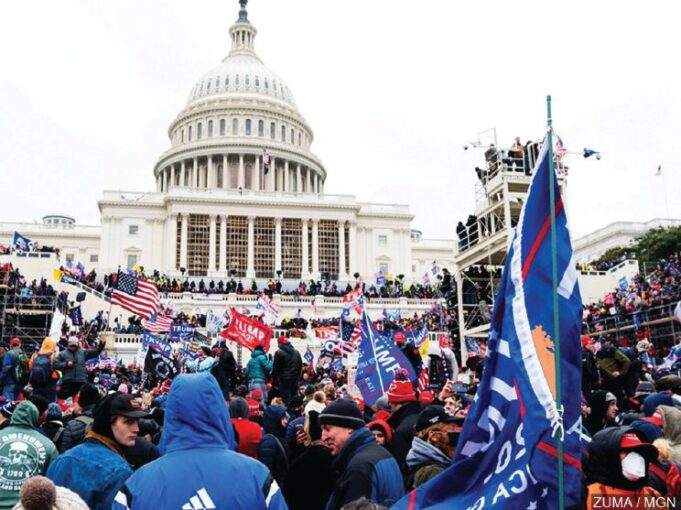 In an extraordinary display of open rebellion, White groups on January 6, 2021, stormed the U. S. Capitol. What is all the more confusing and perplexing is that the activities of these groups that many have condemned as an insurrection was lead and inspired by President Donald J. Trump.

Throughout Black America, there has been outrage and amazement at how kind and accommodating the U.S. Capitol Police were in their handling of the angry mob of White protestors, whose conduct threatened the lives and safety of members of the U.S. Congress who had assembled to certify the 2020 Presidential Election results. This is in stark contrast to how Black Lives Matter protestors were received when they assembled for the purpose of mass rallies to call for justice in the case of the numerous Black men, women and children that have been executed in the streets of America by rogue police officers.

As millions of Black youth join groups like Black Lives Matter, the Nation of Islam, the New Black Panther Party and other groups for the purpose of fighting injustice, they have been labeled as Black Identity Extremists in reports from the FBI. In fact, America’s chief Middle Eastern ally, the state of Israel, had this to say about Black Lives Matter:

“The major problem with Israel is with the young generation of the black community,” said Judith Varnai Shorer, Consul General-Atlanta, Ga.

The August 3, 2017 report issued by the FBI labeled Black Identity Extremists as those “motivated to target law enforcement officials.” Yet in the same year, 2017, statistics emerged revealing the number one terrorist in America was the White male.

In an October 2, 2017 article written for Vox.com entitled “White American men are a bigger domestic terrorist threat than Muslim foreigners,” Jennifer Williams wrote: “But in the eight months since Trump took office, more Americans have been killed in attacks by white American men with no connection to Islam than by Muslim terrorists or foreigners. … In fact, between 2001 and 2015, more Americans were killed by homegrown right-wing extremists than by Islamist terrorists, according to a study by New America, a nonpartisan think tank in Washington, D.C.”

A series of tumultuous events throughout America in 2020 were all directly or indirectly tied to the fundamental problem of injustice and the refusal to give justice to Black people who have been denied justice for nearly 466 years.

Even the Covid-19 pandemic has been enveloped by racial controversies and concerns.

The very serious and ominous cavalcade of events has generated much confusion and anxiety among many.

Fortunately for us, there is guidance available. The Honorable Minister Louis Farrakhan as the representative of the Most Honorable Elijah Muhammad has for many years served as a divine warner to America and the world of the peril that exists as the result of tyranny, oppression and corrupt governments. Over and over again he has pointed us to the words of his teacher the Most Honorable Elijah Muhammad, whose words give us divine insight into the true cause and diagnosis of America’s woes. His words should be studied and used as a guide to understanding the perilous times in which we live.

Consider the following sample of the Most Honorable Elijah Muhammad’s words that although written decades ago could have easily been written today in light of their perfect description of the events and happenings in today’s world:

“Now the rise of America’s once slave into the knowledge of self in the spirit of Allah, in the Person of Master Fard Muhammad (the Son of Man), the Author of the Resurrection of us, the mentally dead is causing untold confusion between the heads of state. … America is being torn to pieces politically, as Pharaoh’s political party was in the days when Jehovah went after the freedom of Israel.” -September 22, 1967

“The ever hovering dark war clouds of death keep the minds of the heads of nations from ever concentrating sanely concerning the way in which they should react under such a troubled and dark world of confusion. Their vision is lost due to their confusion which causes fear. Fear has taken away the mastery of self-control. What will be the end of this confusion which has taken away the vision of the wise?” -May 14, 1971

“She has divided the nations and has put brothers fighting against brothers. Now she must be divided and her brother of evil put to fighting with her. This is going on at the present time … . The white man’s greatest effort to rule us was to divide one against the other. He divided Korea, as you know, with one brother against the other. He divided China, with one brother against the other. There out in Formosa he has a brother of China, sitting there to fight his brother, China, on the mainland. He divided Vietnam just like he did Korea. Then he made the two brothers fight and kill each other while he (the white man) acted as judge.” -September 28, 1973

“War of Confusion is in America among its head officials. In the city the mayor is against the city council of aldermen and the city police department. All there have very little confidence in each other and ever disagreement with each other exists. The Congress is against the President. The President is against Congress. The state government and the Senate are against each other.” -August 22, 1968

“Confusion among the heads of the government of the wicked is destroying the foundation of their world. ‘As thou hast done so shall it be done unto thee.’… In all of America’s confusion—which some may refer to as her dilemma, but her condition is beyond that word—there is a grievous confusion of the head officials. The basis of this confusion is due to the injustice that the American white people have done to her Black once slave. Her confusion is also due to her effort to thwart the Aims and Purposes of Almighty God, to bring about the resurrection of the blind, deaf and dumb Black man … . The world of confusion is breaking up with all kinds of disagreement between factors and factors. Take for instance—never has America had so many strikes. Everyone is against the other. If this is not a confused world then point out to me one that is more confused. In the government of America, there is nothing that is at peace in it. There is no agreement. Everybody is dissatisfied. Everybody is showing their dissatisfaction by disregarding the way that they have been going. Worker is against worker; politician is against politician. A CONFUSED WORLD, AMERICA.” -February 7, 1975

Student Minister Demetric Muhammad is a lecturer and author based in Memphis and a member of the NOI Research Group.