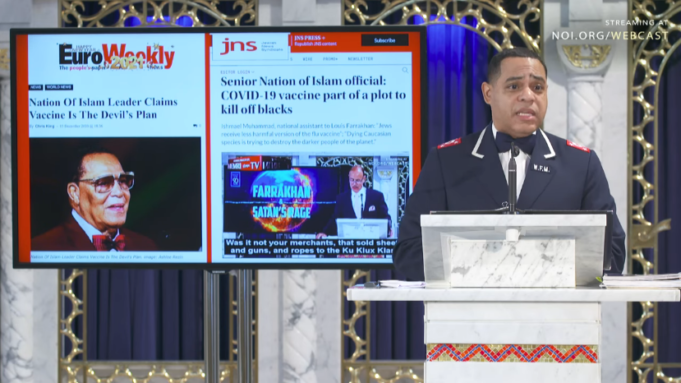 Covid-19 spikes in America occurred soon after the Nation of Islam had its annual Saviours’ Day convention in February 2020. When the virus started plaguing America, Nation of Islam Student Minister Dr. Wesley Muhammad had one main objective: to get through it alive.

Covid-19 vaccines have now begun to roll out across the United States of America and the world.

On January 10, Student Min. Muhammad, a researcher, scholar and author, delivered the Nation of Islam’s Sunday address at Mosque Maryam, titled, “Beyond Tuskegee: Why Black People Must Not Take the Experimental Covid-19 Vaccine.”

“Why beyond Tuskegee? The vaccine mafia who want Black people to be the first injected with this experimental vaccine have centered the Tuskegee experiment in their narrative, most prominently Dr. Fauci. Their aim is to appeal to us by appearing aware of and sensitive and sympathetic to Black people’s history of medical abuse in this country,” he said during the broadcast which was streamed online on noi.org and shared on various Facebook pages.

“But then that narrative pigeonholes that history into Tuskegee, and then they appeal to us to move beyond Tuskegee, because it ‘happened so long ago’ and ‘things in this country have progressed so far since then.’ Black people have no more reason to be suspicious or hesitant to surrender our bodies to further White medical experimentation,” said Student Min. Muhammad.

“When we say beyond Tuskegee, we mean just the opposite. We affirm that for reasons well beyond Tuskegee, Black people are rightly suspicious of the experimental Covid-19 vaccines being rolled out at warp speed,” he continued.

“Today, God-willing, we intend to lay bare and enter into the public record why Black people must not be suspicious of this experimental Covid-19 vaccine but must outright reject it.”

During the lecture, Student Min. Muhammad displayed a visual slide displaying 14 “vaccine-triggered injury and epidemic events.” The list includes: Dr. Hilary Koprowski’s Equatorial African Oral Polio Vaccine Campaign with “Stealth Virus” from 1957 to 1960; the Sabin and Salk U.S. Polio Vaccine campaigns that unleashed polio and SV40-triggered cancers from 1955 to 1963; the Willowbrook Hepatitis Vaccine Experiments from 1955 to 1970; the Portoguese Military Vaccine Campaign that unleashed HIV-2 in Guinea Bissau from 1961 to 1974;

The Hepatitis B Vaccine Trials that unleashed HIV-I/AIDS in several U.S. states from 1974 to 1981; the World Health Organization’s (WHO) Smallpox Vaccine Campaign that unleashed HIV/AIDS in Africa and Haiti from 1967 to 1979; the WHO/Gates DTP Vaccine Campaign that triggered high mortality and the possible spread of an anti-fertility agent in 1981; the Department of Defense and the South African Institute of Maritime Research’s spreading of HIV to Black South Africans via phony vaccinations from 1980 to 1994;

The CDC/Johns Hopkins University Measles Vaccine Experiment in Africa and in Black children in Los Angeles from 1987 to 1991; the WHO Tetanus Vaccine Campaign in Mexico, Nicaragua, and Philippines with anti-fertility agent hCG from 1993 to 1994; the WHO Kano Polio Vaccination Campaign with vaccines that were laced with estrogen and progesterone in 2004; Israel’s covert DepoProvera Vaccination of Ethiopians from 1991 to 2008; the WHO Kenya Tetanus Vaccine Campaign with vaccines laced with hCG in 2014; and lastly, the Department of Defense’s Ebola Vaccine Trials that unleashed Ebola in West Africa in 2014.

During the lecture, Student Min. Muhammad echoed the Honorable Minister Louis Farrakhan, who told Black people during his July 4 message, “The Criterion,” to not take the Covid-19 vaccines.

“Predictably, the vaccine mafia is angry,” Student Min. Muhammad said. He also praised Black artists like Nas, Royce da 5’9”, Freddie Gibbs and Big Sean who have taken a stand in their music against the vaccines and have been villainized in media outlets as a result.

Student Min. Muhammad explained how the CDC Advisory Committee on Immunization Practices, chaired by Dr. Jose Romero, has advised for Black people to leapfrog in front of White people in taking the Covid-19 vaccine.

“Why, Black people, would you believe that White people woke up one very recent morning and all of a sudden now value Black life so much that they are anxious and even insistent that, now that the long-awaited, alleged life-saving protection against this terrifying pandemic is available, the blessing of it should go to Black people first before it goes to themselves?” Dr. Muhammad questioned.

He accused Operation Warp Speed, which is the United States’ plan to accelerate development, production, and distribution of Covid-19 vaccines, as being a “military operation” with a “military agenda.”

According to STAT News, a July 30 Operation Warp Speed organizational chart shows that about 60 out of 90 officials involved in the initiative work for the Department of Defense. Student Min. Muhammad also brought up the U.S. government’s National Security Study Memorandum 200, which is at the root of the country’s depopulation policy.

As people all over the country take the Covid-19 vaccines, people like Dr. Anthony Fauci, director of the National Institute of Allergy and Infectious Diseases, are looking at the numbers, he continued.

“Let’s say we get 75 percent, 80 percent of the population vaccinated,” Dr. Fauci said on Dec. 9. “If we do that, if we do it efficiently enough over the second quarter of 2021, by the time we get to the end of the summer, i.e., the third quarter, we may actually have enough herd immunity protecting our society that as we get to the end of 2021, we can approach very much some degree of normality that is close to where we were before.”

“You, White people, be the cattle, the experimental (group) for your Satanic overlords, and we Black people, will stand back and stand by and see how that works out for you,” Student Min. Muhammad said during his lecture.

He said he would have to deliver a part two in order to go deeper into the list of vaccine-triggered injury and epidemic events he provided. He ended the lecture by saying, “Separation is forced on those of us who don’t want this vaccine,” referencing the Honorable Elijah Muhammad, the patriarch of the Nation of Islam’s words to Black people that separation is the best and only solution to solve the problems of Black and White.

Another user, @MinMosi, tweeted, “I love it. Bro SM Dr, Wesley, comes on with an, I ain’t playing expression. Because this is not a time for playing. Lives are at stake and we need to HEAR AND LISTEN. Or suffer as it ‘was in the days of Noah.’ APDTA.”