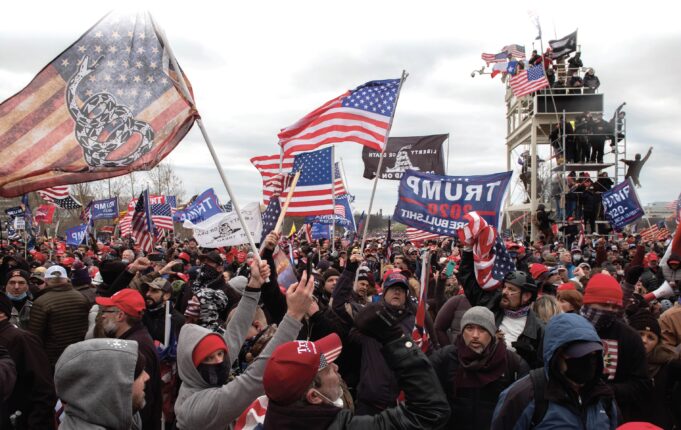 Less than a week into 2021, supporters of President Donald Trump stormed the U.S. Capitol, leaving five people dead, over 50 police officers injured and over 90 people arrested. As the country and world watched the mayhem taking place, many took to social media to question the way White insurrectionists were treated by law enforcement versus how Black protesters are usually handled. It was hypocrisy on full display, observers argued.

“It’s plain for everyone to see that there is a stark contrast, a double standard. There are two Americas. There are two responses by the same police and military forces of this country, law enforcement personnel in this country, when it comes to Black folks who are resisting and protesting the violence against our bodies and our communities by the state government,” Michael McBride, co-founder of the Black Church PAC and national director of the Live Free campaign, told The Final Call.

“When we protest, we are met with terror. But when White folks terrorize us, they are met with accommodations and cooperation.”

What was witnessed Jan. 6 when the Capitol Building in Washington, D.C., was overrun, was a blatant racial double standard, argued critics.

In a Dec. 30 statement, Black Lives Matter D.C. demanded the city government and business leaders stop the Jan. 6 protest that was planned. “Tell the racists that they’re not welcome in our city,” said Née Née Taylor, a core organizer with Black Lives Matter DC (BLM-DC).

In a follow-up statement released Jan. 6, BLM-DC wrote, “We tried to warn you.”

“We tried to warn the mayor and other elected officials, hotels and other businesses and we demanded that our city and sacred Black spaces be protected. Though we remain unsurprised, it should have never gotten to this point,” the statement says. “Instead of brutalizing Black Lives Matter activists, D.C. officials should have intervened months ago. White supremacists were emboldened and made to feel comfortable, confident and secure to come to our city and reign terror.”

This past summer, Black Lives Matter activists in D.C. who were protesting police killings of George Floyd, Breonna Taylor and others saw a different reality than those who stormed the Capitol a few days ago. On June 1, Black Lives Matter demonstrators clashed with thousands of law enforcement personnel. Meanwhile, White rioters faced very little resistance as they stormed the Capitol. The Associated Press reported that according to senior defense officials and two people familiar with the matter, three days before rioters descended on the Capitol, the Pentagon asked the Capitol Police if it needed National Guard manpower, and on the day of, Justice Department leaders reached out to offer up FBI agents. The police turned both down.

“I would’ve just definitely had it set up pretty much like I did with Black Lives Matter. They had the military, Park Police, everybody was involved. They had helicopters. There just wasn’t enough preparation for this, and that fell on somebody’s shoulders,” said a retired U.S. Capitol Police officer who asked The Final Call to withhold his name. “I don’t know if it was deliberate that they just did a soft-hand approach or if it was something that just happened, but it never should’ve happened, because when you start dealing with a crowd this agitated for a situation so delicate as what was going on, in my opinion, you should have handled it like it was a powder keg.”

Jan. 6 insurrectionists were tended to by police and video footage showed in some instances, rioters calmly walked down the Capitol’s steps by law enforcement. While George Floyd protesters were violently taken into custody, Capitol rioters posed for selfies near police in riot gear. One cop was seen running from the crowd, and video footage showed police opening the gates to the compound.

Corey Pegues, a retired executive from the New York City Police Department and an expert on police-related topics, told The Final Call that what happened indicates two things: one, White people get a pass and two, the police were not prepared in numbers.

“They did not prepare properly. But I think it’s more the (former), that they give White people a pass other than they weren’t prepared,” he said. “I think it’s more of them saying ‘hey, it’s just a bunch of White people coming here. They’re just gonna come and say no justice no peace and they’re gonna go home.’ Well, golly, they were surprised, because a bunch of rowdy White people came and overtook our most sacred ground of law, the Capitol.”

Mr. Pegues said, the upper echelon of Capitol Police should be relieved of duty for the lack of preparation. U.S. Capitol Police Chief Steven Sund is resigning effective Jan. 16 amid the tremendous criticism.

When the Honorable Minister Louis Farrakhan of the Nation of Islam organized the Million Man March on October 16, 1995, police forces were fully prepared. The retired U.S. Capitol Police officer said they closed everything down. “All the buildings were closed down, and they had everybody. Everybody was on hand to work,” he said. That day was a peaceful gathering of nearly two million Black men under the theme of atonement, reconciliation and responsibility. No crime was reported in D.C. that day and the Capitol grounds were left clean after the massive gathering.

Eunique Jones Gibson, a cultural architect and social activist, tweeted that her father, Butch T. Jones, who served as a Capitol Hill Police officer for 37 years, told her that there was a time when Minister Farrakhan was on the Hill with four people and the SWAT Team was waiting in the garage.

“He just told me about a time when Farrakhan was on the Hill with 4 men. Not 40. Not 14. FOUR. They had the SWAT Team in the garage and held the entire department until Farrakhan left. He said if you even mention his name, all days off were canceled due to prep,” she continued.

Political and social justice activist Linda Sarsour shared via Instagram that she co-organized a women-led civil disobedience gathering in June 2018, where Capitol Police arrested over 600 women. In October 2013, Miriam Carey, a Black woman, was shot and killed by Capitol Police after she hit a security barrier one block away from the White House. Officers engaged her in a car chase and shot 26 times while her 13-month-old baby was in the car.

The day after the White riot, President-elect Joe Biden acknowledged the double standard. “No one can tell me that if it had been a group of Black Lives Matter protesters yesterday that they wouldn’t have been treated very differently than the mob that stormed the Capitol,” he said.

Mr. McBride said part of the reason for the differences in treatment is because Blackness is criminalized in the mainstream consciousness of the country. He also explained how White law enforcement officials have family members in White supremacist extremist groups and therefore have empathy and compassion for them. One Metro D.C. police officer said in a Facebook post that off-duty police officers and members of the military, who were among the rioters, flashed their badges and I.D. cards.

“There’s no way in the world that a group of Black people could announce for weeks that they’re going to have thousands of people come to Washington, D.C. and do a protest and they do not activate thousands and thousands of cops,” Mr. Pegues said. “So you gotta understand one thing. I’ve been in policing 21 years. White people are not afraid of the police because the police are hands off on White people, so that’s why it’s so easy for them. Black people wouldn’t even attempt to break a window in the Capitol, because you know you’re going to get shot down.”

He said he thinks the country is in a good space, now, because everything is out in front.

Dr. Greg Carr is a professor and chair of the Department of Africana Studies at Howard University. He told The Final Call he was encouraged by the White riot.

Dr. Carr added, that, with the inauguration of President-elect Joe Biden and Vice President-elect Kamala Harris, now is the time to break up the Republican filibuster, put more money into people’s pockets, pass the John Lewis Voting Rights Advancement Act and pass the George Floyd Justice in Policing Act.

He also said what took place is the possibility of the next major turning point in the fall of America, referencing words from the Honorable Elijah Muhammad, the patriarch of the Nation of Islam.