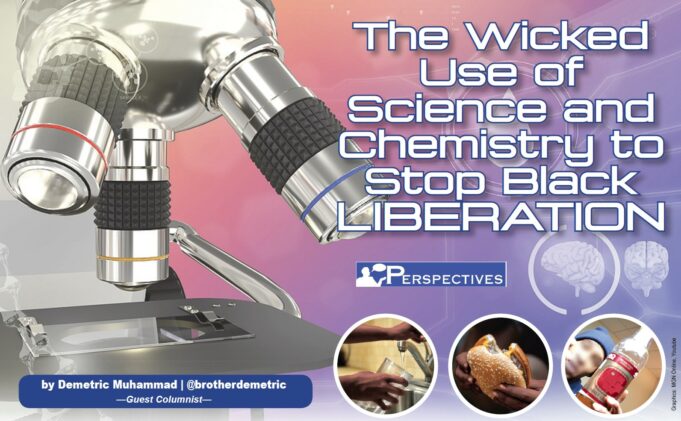 “… they would not teach our people the science of modern warfare (defense), birth control or chemistry.”

“The devil desires only to create enmity and hatred among you by means of intoxicants and games of chance, and to keep you back from the remembrance of Allah and from prayer. Will you then keep back?”

“The slave may be ‘used’ so as to be ‘used up’ in seven years; may be used as a ‘breeder,’ as a prostitute, as a concubine, as a pimp, as a tapster, as an attendant at the gaming-table, as a subject of medical and surgical experiments for the benefit of science …”

A review of the Most Honorable Elijah Muhammad’s teachings about Mr. Yacub, a great Black scientist whose divine mission it was to graft out of Black people the White race, is helpful to us in considering the Minister’s admonition.

The Hon. Elijah Muhammad said that Mr. Yacub used doctors and nurses in the process of grafting the White race by using the genetic material of the original Black people. Mr. Yacub was a scientist. And contrary to popular opinion, it is not brute force that has been the secret to White supremacy’s global conquest of people of color. It has been the weaponization of science.

The Most Honorable Elijah Muhammad writes in “Message To The Blackman”:

“His [Yacub’s] aim was to kill and destroy the Black nation. He ordered the nurses to kill all Black babies that were born among his people, by pricking the brains with a sharp needle as soon as the Black child’s head is out of the mother.”

Yacub’s needling of the brains of Black babies more than 6,000 years ago is tied to today’s push by the modern Yacubian scientists who follow after his model. As infamous attorney Alan Dershowitz proclaimed, the government has the power to “plunge a needle” filled with Covid-19 vaccine into the arms of the Black and Latino communities.

While Mr. Yacub was trying to prevent the physical birth of Black babies, today there is a push and hidden agenda to not only curtail the birth rate and subsequent population growth of Black and Latino people, but to also mentally incapacitate us. The history of the White oppression of Black people is replete with documentation of the White ruling class’s sophisticated scientific war against Black life and the revolutionary ideas that move our people towards the ultimate goal of freedom and independence.

“Pass as severe laws as you will to keep these unfortunate creatures in ignorance. It is in vain unless you can extinguish that spark of intellect which God has given them. … Sir, we have as far as possible closed every avenue by which light may enter their minds. We only have to go one step further to extinguish their capacity to see the light and our work will be completed. And they would then be reduced to the level of the beasts of the field and we should be safe.”

Henry Berry’s passionate plea to find a way to destroy Black intellect so that White people could be safe is an extraordinary admission! He here draws a direct line of both correlation and causation between intelligence and revolution.

That a Covid-19 vaccine has been hastily readied for a Christmas time delivery has caused me to reflect upon the words of Fredrick Douglass in his autobiography. He notes that during Christmas time alcohol was used as a chemical substance to blunt and neutralize the minds of Black slaves. Plantation owners feared that slaves would use Christmas time as an occasion to escape bondage and foment insurrection. According to Douglass:

“We [slaves] were induced to drink … When the slave was drunk the slaveholder had no fear that he would plan an insurrection, or that he would escape to the North. It was the sober, thoughtful slave who was dangerous and needed the vigilance of his master to keep him a slave.”

What will be the lasting side effects of the Covid-19 vaccine upon the bodies and minds of those in the Black and Latino community? We don’t know. But we must maintain a vigilance that is based upon the Minister’s guidance and our knowledge of the history of science and chemistry being weaponized against our fight for liberation.

In the 1960s heroin ravaged the inner cities of America at a period of time when many youths were beginning to become politically active and joining the fight for justice and equality. During the 1980s crack cocaine appeared as a chemical scourge that victimized millions of youth at a time when many youths were becoming socially conscious and becoming members of the rebuilt Nation of Islam led by the Honorable Minister Louis Farrakhan.

Cocaine as a chemical substance used to control Black behavior is discussed by author Richard Harvey Brown in his work Coca and Cocaine in the United States. He writes:

“Employers in the South had made a practice of supplying their black workers with cocaine … plantation owners had discovered things went better with coke. Thus, they kept a steady supply on hand to increase productivity and keep workers content. Cocaine was also a cheap incentive to maintain control of workers. A shrewd boss doling out one-quarter gram a day per man could keep sixteen workers happy and more productive for a full seven days on a single ounce.”

The U.S. Government’s complicity in the Black community’s problems with chemical substance abuse was the subject of a 1996 public forum with CIA Director John Deutch and the Black community of South Central Los Angeles. It was there, in a public forum, that former LAPD detective Michael C. Ruppert publicly stated:

“I will tell you Director Deutch, as a former Los Angeles police narcotics detective, that the Agency has dealt drugs throughout this country for a long time. Director Deutch, I will refer you to three specific Agency operations known as Amadeus, Pegasus and Watchtower. I have Watchtower documents, heavily redacted by the Agency. I was personally exposed to CIA operations and recruited by CIA personnel who attempted to recruit me in the late seventies to become involved in protecting Agency drug operations in this country.”

During the days of chattel slavery, in the era of Virginia legislator Henry Berry, Yacubian physician Dr. Samuel A. Cartwright invented the diagnosis known as “drapetomania” for Blacks who refused to comfortably accept chattel slavery as their lot in life. And he prescribed brutal beating as the only cure.

The words of Minister Farrakhan, as THE spiritual guide and messianic presence among us should guide us. A study of history should confirm us in following the Minister’s guidance. This vaccine is being pushed onto the Black community during a time where our cry for justice has reached a definite crescendo! We must reject the scientific use of yet another chemical substance that claims to heal us now but may harm us later. The chemistry of alcohol, heroin, cocaine and various other substances have all been weaponized against our people over the years. But they have not been able to completely destroy the spark of our Allah (God) given intellect that when properly fed, propels us towards freedom and independence!

A final word from the Most Hon. Elijah Muhammad:

“This is the real trouble: the whites oppose us, the Black people of America, who were their slaves once upon a time, from ever becoming anything like self-independent. They want to keep them subject to themselves in a more educational and scientific way, other than their fathers. Their fathers only used the common knowledge of enslaving our people. But, today their children can use one of the smartest scientific ways against our people to keep them subjected to them that ever were invented by a race of people since time was.”

Demetric Muhammad is a Memphis-based author and student minister in the Nation of Islam. Read more at www.researchminister.com.