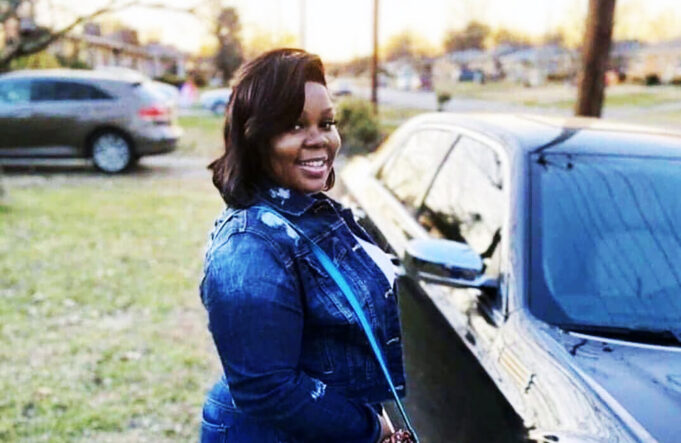 The news about the death of Breonna Taylor, a 26-year-old EMT worker from Louisville, Ky., made national headlines on talk shows like “The View,” “The Steve Harvey Morning Show,” news stations, and hit documentaries,  magazines, and other outlets.

People of different races alike rallied around the call for justice in Breonna Taylor’s case. It is a case many will never forget and Black women, in particular, rose up and cried out for justice.

“Breonna Taylor helped us all to remember the Black woman. Black women are on the frontlines of everything in America. It has been inbred in us to conform to the demands of the ills of this land. Breonna is a shero to me, a martyr,” said activist Jacinta A.

“No matter how controversial matters and circumstances are surrounding and leading up to the moment of her last breath, she took a stand for the men in her life. Breonna is every Black woman that I know—educated, spiritual, beautiful and talented and professional,” she added.

Ms. Taylor was gunned down in her apartment shortly after midnight on March 13, 2020. She was relaxing with her boyfriend Kenneth Walker. Officers from the Louisville police drug unit came with a “no knock warrant” for a suspect they actually had in custody. Police claimed they knocked on the door. They forced themselves in her apartment. Her boyfriend, a legal gun owner, fired a shot after the invasion.

An officer was shot in the leg. Later charges of attempting to murder a police officer were dropped against Mr. Walker and he was released from jail.

Ms. Taylor’s death received overwhelming calls for justice and brought international attention to the killing of a Black woman. “Say Her Name” was used to symbolize the remembrance of Black women killed by police. Community activists, celebrities, athletes, politicians, men, women and children shouted her name. A radiant photo of her with a dimpled smile and beautiful eyes captivated the world. Her photo was seen all over the world.

Ms. Taylor’s picture was the first photo other than Oprah Winfrey to grace the cover of “O” magazine, which was posted on 26 billboards in Louisville, one for every year of Ms. Taylor’s life and to bring attention to the injustice. Her image was seen on the cover of the September 2020 Vanity Fair magazine, in murals on the sides of buildings, painted in the streets and Breonna Taylor became a household name. WNBA players donned jerseys with her name.

Unlike other cases, Ms. Taylor’s death wasn’t forgotten. Historically, the majority of Black people killed by police in the United States have been Black males. But the stories of Black women are ignored and Black women are more likely than Whites to die at the hand of police.

What made Breonna Taylor’s story so different?

Nineteen-year-old college student Orianna Ward, an aspiring dentist at Tuskegee University, spoke candidly about the impact of Breonna Taylor’s loss. “Personally, the death of Breonna Taylor makes me feel very angry and hurt because it showed that Black women are not respected like men are in this country and really the world. Our country still hasn’t improved in a lot of ways regarding our justice and police system,” she said. “Due to the fact that the country was built on injustice, our people have always gotten the short end of the stick.”

“Those officers were lawfully able to go in her house and kill her and the officer wasn’t charged,” she added.

“And to show how disrespected (Black women) are, the Kentucky attorney general Daniel Camron didn’t even mention her name when the officer was just charged with recklessly shooting into the neighbor’s apartment, but not for the death of a Black woman,”  said Ms. Ward. “Her death honestly makes you find ways to be a part of change, even if it’s not as an activist, but rally to fight injustice on a personal level.”

Breonna Taylor reminded you of your sister, your best friend, she wasn’t someone famous, just a down to earth young working woman enjoying her life, said others. Images on social media captured an outgoing fun person, laughing, singing and dancing. So, when the world saw her, they connected with her, she became like family.

“Do you ever think about what you were doing when you heard about Breonna Taylor?” asked Robin Peebles, 55-year-old business owner. “I do, I remember that day for it will forever be implanted in my memory.  Because that day I woke up, in my home, in my bed with no bullets fired in my home, my body wasn’t lying cold,” she said. “I was able to call my mom, hug my daughter and my son. I brushed my teeth, combed my hair and was able to go to work that day because I wasn’t Breonna Taylor. So I thought. But as the story began to unfold, I realized Breonna Taylor is just a name, but that could have been me, my mom, my sister or even my daughter. So, at that moment I realized, I am Breonna Taylor.”

“The color of my skin makes me Breonna Taylor, Mike Brown, George Floyd and so many others. Breonna Taylor’s death left me angry and confused because that could have easily been me,” said Ms. Peebles.

According to Kimberle Crenshaw, a UCLA law professor and the executive director of the African American Policy Forum, said Black women have the highest rates of homicide in the country. Ms. Crenshaw started the #SAYHERNAME campaign in conjunction with the forum to bring awareness to the often invisible names of Black women who have been targets of law enforcement.

“There’s a long history of sidelining Black women’s lived experiences. And it may be hard to conceptualize anti-Black violence against women because of the historical emphasis on Black men’s stories,” she said.

“During slavery in the United States, Black women endured endless labor, sexual assault and being torn away from their children. Black men also bore inhumane treatment during slavery, but oftentimes their stories became the center narrative.

“Breonna Taylor’s death called Black women to action once again,” she said, “as we have always played important roles throughout history. Her death definitely opened our eyes, and not just Black women, but people in general. It forced people to acknowledge what’s going on around them and the injustices that people face every day.”

“I feel what happened to Breonna Taylor has caused us to unite more as a people and stand up and come together with one another,” added entrepreneur Aliya Simpson.

The mother of Breonna Taylor, Tamika Palmer, wrote a letter posted in the New York Times to President-elect Biden. She asked him to hold police accountable by pushing policy changes to help curb police brutality. She said Mr. Biden’s victory in the 2020 presidential election was partially because of the outrage created by police violence and brutality including the death of her daughter. Ms. Palmer is hoping to make sure that another family doesn’t have to experience the same pain she lives with. These demands are part of the Grassroots Law Project, co-founded by talk show personality and community activist Shaun King and Atty. Lee Merritt.

“For many Americans, a vote for you was a vote for Breonna, Jacob Blake, Casey Goodson and so many others who have been failed repeatedly by the criminal justice system under the current administration, we need your actions to show that you are different than those who pay lip-service to our losses while doing nothing to show that our loved ones’ lives mattered,” Ms. Palmer stated in her letter.

Several months after the death, the family of Breonna Taylor received a $12 million settlement for her death. The officers involved are still free and not held responsible or charged for her death.

Breonna Taylor will forever be remembered. “Say Her Name.”