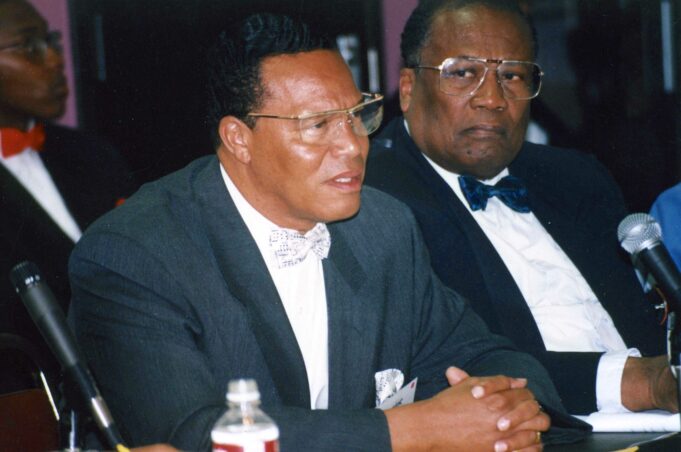 The Honorable Minister Louis Farrakhan delivered touching and insightful words as part of a janazah, or funeral service, webcast online from Murray Brothers Funeral Home in Atlanta, Ga., on December 21, 2020 for Min. Abdul Allah Muhammad. A devoted helper, teacher, Believer in the Nation of Islam and the Hon. Elijah Muhammad and friend and helper to Min. Farrakhan in the rebuilding of the Nation of Islam, Min. Abdul Allah Muhammad, who was a towering figure in Islam on the West Coast when known as John Shabazz, departed this life on Dec. 15. Min. Farrakhan’s edited remarks are published below. He delivered the words via telephone.  Long live the spirit and the contribution of Min. Abdul Allah Muhammad.)

I thank Allah (God) for being on the list of those who came to pay honor and respect to Brother Abdul Allah Muhammad, and to observe and be a part of his Janazah.

To Brother Abdul Sharrieff Muhammad, the Southern Regional representative of the Honorable Elijah Muhammad, to the master of ceremonies, and to those who spoke, to Sister Aishah, Sister Sandy, and all the members of the family of our brother: On behalf of my wife Khadijah and myself, my family, and the members of the Nation of Islam, we give honor and praise to Allah (God) for having had time with Brother Abdul Allah and knowing him.

My wife and I have known him for 60 years. I thank Allah (God) for those of you whose tears I saw, whose pain I share with you. Because anyone who knew John Shabazz, or knew Abdul Allah Muhammad, knew a man who was an excellent teacher of the Teachings of the Honorable Elijah Muhammad. When you had him as a friend, you could not walk around not knowing the God, the Messenger of God, and Islam—not only “101,” but you knew it pretty well if you were around Abdul Allah Muhammad.

I met him 60 years ago on my first flight to California on the last day of December 1959.  The Honorable Elijah Muhammad was overseas with members of his family, visiting Mecca and Medinah, and other places, Sudan and Pakistan, and Brother Malcolm and Brother Lucius Bey were put over the Nation in the absence of the Messenger. Brother Malcolm sent me to Los Angeles to represent him as he had a speaking engagement and couldn’t make it. It was my first jet flight, United Airlines, and the New Year came in while I was in the air on that flight. By the time that plane landed in Los Angeles, it was early in the morning of the first day of the New Year, January 1, 1960.

I had never been to the West Coast. I’ve never seen a city so beautiful. It was so beautiful to me as they showed me around, I had to go and lay down because I had never been exposed to the kind of beauty that I met in Los Angeles. It was there that I met John Shabazz. I had just made a record called “A White Man’s Heaven is a Black Man’s Hell,” and Brother John and I, and Minister Henry, we talked a lot about music and the Messenger.

Ever since I met my brother, we have never had one word of misunderstanding. He was deep, he was penetrating; he was comical, he had a lot of wit. In the time of the Honorable Elijah Muhammad, there were two men that were the greatest representatives of the Honorable Elijah Muhammad at that time: No. 1 was Malcolm X, No. 2 was John Shabazz. No one compared to him in debates he would have with Whites or so-called Negroes that wanted to argue against Islam. I have never known him to lose any argument, or any debate. Nobody could keep up with John Shabazz or Malcolm X.

When the Messenger’s 44 years to lay the foundation with the early Muslims was up, and He went to be with his Teacher, He assigned Brother John Shabazz to Atlanta, a city of learned people. That was like putting a rabbit in a briar patch because John Shabazz met all comers of knowledge and overcame them with the Wisdom of the Honorable Elijah Muhammad.

So, we gave that name to the man formerly known as John Shabazz because in my mind he was a great Servant of Allah, and a great Servant of Muhammad Mahdi, Muhammad Masi, Muhammad the Prophet of Islam through whom the Qur’an was revealed. So, to the family, you are of a lineage of tremendous proportions: You came from a great line that goes all the way back to Allah Himself. And when you are the seed of Abdul Allah Muhammad, you are the seed of one chosen by Allah (God) to reflect His Wisdom to all that would come in the sphere of his presence.

I am honored to be here in Chicago, to be here and to look at you. I can see you, and you look fine to me. Sister Aishah, from the last time I was with you and your husband, Brother Abdul Allah, you will see a picture of me in the program. I kissed my brother on his forehead. I did it a few times because I wanted the photographer to take that picture as I kissed a man on the forehead, which always represented to me the Wisdom of God. And that man, Brother Abdul Allah, I told him that I heard a subject that he was teaching as my son Mustapha and I were driving from the airport to meet with him. The subject he taught was so heavy, and he was talking about me—and I knew that he knew me before I knew myself. He was teaching the people about his brother out of the knowledge and love that he had for me, for us, for this Nation.

All of us who celebrate him, know that our day is coming sooner or later, when we all will return to Allah. Some will return in shame, because they misused the time that they had; they misused the life that He gave. But not Abdul Allah! He returned to Allah (God) after giving his life to a Cause bigger than himself. He became a student of the Revelation of the Qur’an, and a student of the Revelation that Allah (God) gave to the Honorable Elijah Muhammad. Now he is with Allah (God). I can’t speak for Allah (God), except He gives me something to say, but I believe He is pleased with His servant. Well thou, good and [faithful] servant of Allah, you have been faithful over little I will make you rule over much. Enter thou into Thy joy for a job well done, a life well lived.”

Peace to all of you and thank you for allowing me these few words. As-Salaam Alaikum.