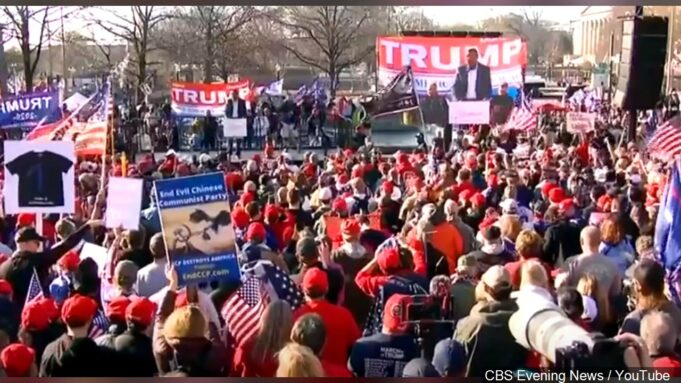 WASHINGTON—Fueled by Donald J. Trump’s baseless, seditious claims that the 2020 presidential election was stolen from him, and supported by 126 Republican members of Congress, 18 state attorney generals—including those from mythical “New California” and “New Nevada”—and by millions of rabid, mostly White people who voted for him, the United States is poised on the brink of a civil war.

Before that, a total of 55 state and federal court challenges in seven states, and two appeals to the Supreme Court brought by the incumbent were thrown out—in some cases laughed out of court—because of a lack of evidence of fraud or any wrongdoing which might have changed the election outcome.

But as it was 160 years ago, the maneuvers fueled by Mr. Trump’s open race hatred, this time to disqualify the votes in Georgia, Michigan, Pennsylvania, and Wisconsin, where Black voter turnout was decisive against him, figure to result in another “Lost Cause,” like the first Civil War.

“There are certainly some direct comparisons in the sense of the mythology of the ‘Lost Cause’ involves a lot of lives. The most obvious one being that the Civil War wasn’t about slavery,” Neil Buchanan, professor of law at the University of Florida said in an interview. “And it turns out that every single one of them was a lie.

“And so, the comparison to Trump would be all of these lawsuits that allege the fraud keep getting thrown out because the judges are saying, ‘What are you even alleging here?’ The Trump argument more generally is about fraud and all these things that never happened.

“And the interesting thing is that the Lost Cause mythology took decades to build,” during the Antebellum period. “Whereas the Trump thing has happened over the space of weeks, right? First it was, we have to have recounts and then they went to putting pressure on state legislatures and now it’s to the Supreme Court. And apparently after this, it’ll be Jan. 6, they’ll try to object in Congress. This is warp speed kind of stuff. I mean, I know that warp speed is a covid reference right now, but more generally, it’s just amazing how quickly this alternate reality took over, led by Trump, but certainly not limited to him,” Prof. Buchanan continued.

Mr. Trump and his supporters are openly challenging the Electoral College count and are threatening a violent rebellion rendering Mr. Biden’s administration unable to govern when he is inaugurated on Jan 20.

Disgraced former National Security Adviser Michael Flynn insisted on Dec. 13, that Americans will “not allow” President-elect Joe Biden’s “false inauguration” to go forward. Mr. Flynn, who has previously suggested that Mr. Trump should declare martial law and invalidate the Nov. 3 election, told Fox News that there is a “10 out of 10” chance that President Donald Trump will be the next commander-in-chief.

Ultra-conservative radio commentator Rush Limbaugh, Breitbart News, and others voiced similar views, noting that as many as 79 percent of those who voted for Mr. Trump—including Republican members of Congress who were elected on the same ballots—believe that the election is a fraud.

There can be no such thing as a “rule of law” so long as right-wingers are not allowed to dominate, Mr. Limbaugh told Media Matters on Dec. 9. “There cannot be a peaceful coexistence of two completely different theories of life, theories of government, theories of how we manage our affairs. We can’t be in this dire a conflict without something giving somewhere along the way.” This effort would result in the largest voter nullification in U.S. history.

In another turn of events, Trump loyalist Attorney General William Barr, announced on Dec. 14 that he was resigning effective a few days before Christmas.

The solution advocated by losing conservatives is that states which reject the will of the liberal voting majority—like it was in 1860—will secede from the United States into a new confederacy of like-minded states where the will of Black voters cannot be decisive.

The Arizona Republican Party has asked its followers if they are willing to die for the cause of overturning the presidential election results. The party’s official Twitter account on Dec. 7 shared a post from Ali Alexander, an activist with an organization called “Stop the Steal” that has protested election results.

“I am willing to give my life for this fight,” Mr. Alexander wrote. When sharing the post, the GOP asked followers: “He is. Are you?” One GOP official Rep. Paul Gosar (R-Ariz.) touted a letter signed by multiple legislators calling for the “decertification” of the election, calling it “28 bitch slaps.”

“Well, they’re going to try to introduce chaos. If this election is indeed awarded to Donald Trump through some series of subterfuge, doing something as overt as that it would be the end of the federal polity,” or civil government, said Dr. Carr.

“By that, I mean, the states like California, New York, these states are just not going to tolerate that. And the states where the election was much closer will erupt. Now, there will be some, among the White nationalists, who would say that’s been the end game all along,” to render any governing authority other than that of Mr. Trump obsolete. “It’s certainly not outlandish to map out the type of sequential scenario with contests and chaos being introduced all the way through.”

So, when moderates and liberal Whites argue that the violent, xenophobic, racist behavior by right wing militia groups is “not who we Americans are,” that is a myth, according to Prof. Buchanan. The lockstep, White, Republican support for Mr. Trump is not because they’re happy to see the record numbers of young, conservative judges receiving lifetime appointments as federal judges, or because of the GOP’s tax cuts for the rich—“which I will call the slime-for-judges theory,” he said.

“But that theory is wrong. The evidence instead leaves only one possible conclusion. Republicans simply like what Trump is, what he does, and the depths of bigoted authoritarianism to which he would take this country. Moreover, they never cared about the other stuff. They are not tolerating a repellent quid in order to get a delightful quo. It is win-win for them all the way down.”

Trump and Trumpism is who White Americans really are. One blogger, Kat Kerr posted on social media that “a mantle of presidential favor and governmental authority” has been bestowed on Mr. Trump via divine authority. Regardless of the law, the outcome of the Electoral College, and even the declarations of the Supreme Court, Mr. Trump will “sit as president for 4 more years no matter what anyone else says, that is God’s plan.” Critics warn that would amount to a fascist takeover, a coup d’état.

But General Mark Milley, chairman of the Joint Chiefs of Staff pointedly distanced the military from talk of a coup. “Our military is very, very capable … we are determined to defend the U.S. Constitution,” he said, according to the Military Times. “No one should doubt that.” The idea of Mr. Trump declaring martial law and having the military re-do the election is “insane in a year that we didn’t think could get anymore insane.”

But as Mr. Trump’s supporters have escalated their tactics—armed groups surrounding the homes of election officials, and violent rallies in Washington, D.C. and various state capitals—the concern that the situation might spiral out of control has increased, according to Prof. Buchanan.

What will likely happen on Jan. 6 when Congress meets to certify the Biden electoral victory, is that two congressmen, Rep. Mo Brooks (R-Ga.) and Mr. Gosar, who said he would never accept Mr. Biden as president, because he claims there was “too much evidence of fraud,” will challenge the Electoral College count. There will be a debate, and then a vote, requiring the Senate and the Democratic-controlled House of Representatives to agree to decertify the count, which is unlikely.