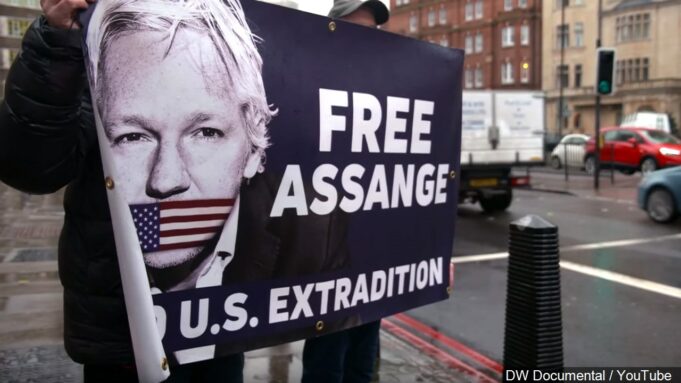 Amid a Covid-19 outbreak at London’s Belmarsh prison, an independent UN expert appealed to British authorities to release Julian Assange or to place him under guarded house arrest during extradition proceedings to the United States.

“Mr. Assange is not a criminal convict and poses no threat to anyone, so his prolonged solitary confinement in a high security prison is neither necessary nor proportionate and clearly lacks any legal basis,” said Nils Melzer, UN Special Rapporteur on torture Dec. 8.

The WikiLeaks founder has been detained since 2010 after his site published classified diplomatic information. A decision on extradition to the U.S. is expected early in the new year.

The UN expert made the call amidst reports that 65 of some 160 Belmarsh inmates have contracted the coronavirus, including a number in the wing where Mr. Assange is being held.

Painting a picture of progressively severe suffering inflicted on Mr. Assange from his prolonged solitary confinement, the Special Rapporteur upheld that it not only amounts to arbitrary detention, but also to torture and other cruel, inhuman or degrading treatment or punishment.

“Prison decongestion measures seen around the world in response to Covid-19 should be extended to all inmates whose imprisonment is not absolutely necessary,” the Special Rapporteur said. “First and foremost, alternative non-custodial measures should be extended to those with specific vulnerabilities, such as Mr. Assange, who suffers from a pre-existing respiratory health condition.”

A history of deprivation

In an opinion rendered in December 2015, the UN Working Group on Arbitrary Detention found that since his arrest on December 7, 2010, Mr. Assange had been subjected to various forms of arbitrary deprivation of liberty, including 10 days in London’s Wandsworth prison; 550 days of house arrest; and almost seven years of self-confinement in the Ecuadorian Embassy in London, under threat of arrest if he left the building.

Moreover, since April 2019, Mr. Assange has been held in near total isolation at Belmarsh.

“The British authorities initially detained Mr. Assange on the basis of an arrest warrant issued by Sweden in connection with allegations of sexual misconduct that have since been formally dropped due to lack of evidence,” said Mr. Melzer.

“Today, he is detained for exclusively preventative purposes, to ensure his presence during the ongoing U.S. extradition trial, a proceeding which may well last several years.”

A call for freedom

Against the backdrop of significant risks associated with his continued imprisonment and concerns over his treatment and conditions of detention, the UN expert reiterated previous appeals that Mr. Assange be immediately released or placed under guarded house arrest.

“Mr. Assange’s rights have been severely violated for more than a decade,” asserted the Special Rapporteur. “He must now be allowed to live a normal family, social and professional life, to recover his health and to adequately prepare his defence against the U.S. extradition request pending against him.”

The expert also reiterated his call to the British authorities not to extradite him to the U.S. due to serious human rights concerns.

Special Rapporteurs are appointed by the Geneva-based UN Human Rights Council to examine and report back on a specific human rights theme or a country situation. The experts are not UN staff, nor are they paid for their work. (UN News)