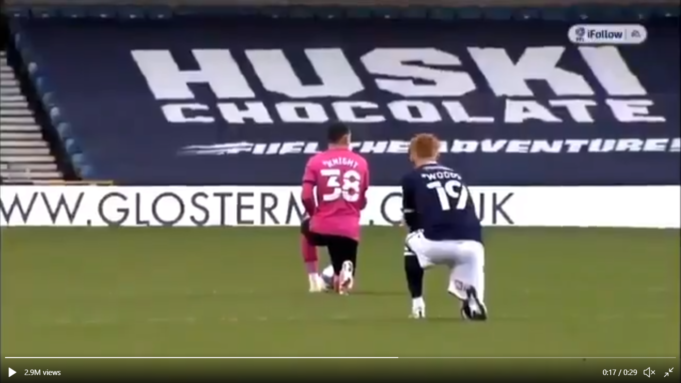 LONDON—Fans attending an English second-tier match between host Millwall and Derby jeered as players took a knee in support of the Black Lives Matter movement.

In video footage published on social media, booing was clearly heard from some fans in the stands containing Millwall supporters as both sets of players made the symbolic gesture after the referee blew the whistle to signal the start of the match at The Den, the home stadium of the south London club.

Only home fans are allowed into games due to pandemic restrictions.

“I heard it and was very surprised,” said Derby manager Wayne Rooney, the former England and Manchester United striker. “It’s a shame because there has been great progress in that campaign and hearing that is very disappointing and upsetting for a lot of people.”

Players in English soccer have continued to take a knee this season to show support for the fight against discrimination following the death of George Floyd in the United States. Mr. Floyd, a Black man in handcuffs, died May 25 after a White police officer pressed his knee against Mr. Floyd’s neck as he said he couldn’t breathe.

Limited numbers of fans were allowed in stadiums in early December in England for the first time since the coronavirus outbreak in March. This was the first game with supporters at The Den since Feb. 29, and 2,000 were allowed into the ground. Derby won 1-0.

“The club does an enormous amount of work on anti-racism and the club do a lot of work in the community and there is some really positive stuff,” said Millwall manager Gary Rowett, “so of course I am disappointed.”

In what appeared to be a response to the incident at the Millwall-Derby game, the English Football Association said it “supports all players and staff that wish to take a stand against discrimination in a respectful manner, which includes taking of the knee.”

It “strongly condemns the behaviors of any spectators that actively voice their opposition to such activities,” the FA said.

Derby forward Colin Kazim-Richards, who is Black, described the booing as an “absolute disgrace” in a tweet after the match where he expressed pride in taking a stand against racism.

“Having to say this is a pain,” Mr. Kazim-Richards said, “but I’ll say it every single damn time this is why I STAND and STAND PROUD and I have to say every single person involved with (Derby) did too.”

He added that it “made me proud to wear this shirt with the boys today!!!”

The English Football League, which runs the three divisions below the Premier League including the Championship, said it would continue to support clubs and players who wish to take a knee. (AP)