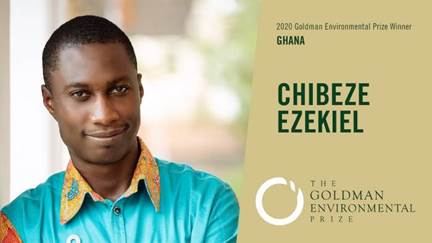 (GIN)—Coal kills.  Choose renewable. Those were the bedrock principles of environmental activist Chibeze Ezekiel, a grassroots organizer from Ghana, who in November was named one of five winners of the prestigious Goldman Environmental Prize for 2020.

Through the efforts of Ezekiel and members of 350 Ghana Reducing Our Carbon (G-ROC), among others, the Ghanaian Minister of Environment was persuaded to drop plans for the so-called “Supercritical Coal Fired Power Plant” in Aboano, a coastal fishing community, and choose renewable energy for the way forward.

The Ghana Coal power station, proposed by the Shenzhen Energy Group and the Volta River Authority, was initially planned for Ekumfi, central Ghana, at a cost of $700 million, later upped to $1.5 billion. Once operating, the plant would burn two million tons of coal per year, imported from South Africa.

Mr. Ezekial and members of G-ROC denounced the plan, whose coal emissions would have negatively affected the health of the people in the area.

According to the Ghana Youth Environmental Movement, neither the public nor the media were adequately informed about the project nor its threat to children who make up 55.5 percent of the local population of 1,900. Children are very vulnerable especially to air-borne pollutants, they pointed out.

Finally, after a campaign of four years, Minister of the Environment Mahama Ayariga indicated that the project had been shelved due to climate change concerns.

Had the project gone forward, the country would have been in violation of the recent Paris climate change agreement which required countries to work towards reducing greenhouse gas emissions, Mr. Ezekiel said.

Goldman prize recipients are selected by an international jury from confidential nominations submitted by a global group of environmental organizations and individuals. The winners are announced every April to coincide with Earth Day.

Prize recipients participate in a 10-day tour of San Francisco and Washington, D.C.,—highlighted by award ceremonies in those cities—including media interviews, funder briefings, and meetings with political and environmental leaders.

Other winners were Nemonte Nenquimo of Ecuador, Lucie Pinson of France, Paul Sien Twa of Myanmar, Kristal Ambrose of the Bahamas, and Leydey Pech of Mexico. For more information, visit www.goldmanprize.org.