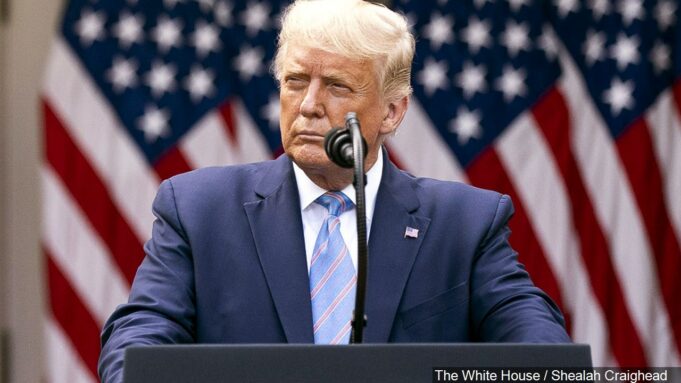 President Trump lambasted the FBI in a Fox News Channel interview, expressing his outrage at his FBI and Justice Department’s failures to probe his unproven claims of election fraud.

The president took the top level policing agency in the U.S. government to task in the Nov. 29 edition of “Sunday Morning Futures.”

The president has been fuming since losing the Nov. 3 election and has been losing court battles to substantiate his widely repudiated accounts of misdeeds at the ballot box and subsequent loss to Democrat Joe Biden, who is set to be inaugurated Jan. 20.

In the interview with Maria Bartiromo,  Mr. Trump said, “You would think if you’re in the FBI or Department of Justice, this is the biggest thing you could be looking at. Where are they? I’ve not seen anything.”

“They just keep moving along and they go on to the next president,” he said, according to a Fox News article online.

“I ask, are they [DOJ and FBI] looking at it? Everyone says, ‘Yes, they’re looking at it,’ ” Mr. Trump said in the Fox News report. “Look, where are they with [Former FBI director James] Comey, [former FBI Deputy Director Andrew] McCabe and all of these other people?”

“ ‘They lied to Congress, they lied, they leaked, they spied on our campaign,’ he added, referencing the Russia probe,” said Fox News.

The president also blamed Dominion Voting Systems for fraud that skewed election results against him. According to Fox News, he said: “All I can say is I haven’t heard, with all of the fraud that’s taken place, nobody has come to me and said, ‘Oh, the FBI has nabbed, you know the people that are doing this game. The FBI is looking at Dominion,’ which nobody even knows where they’re based, which nobody even knows where the votes are counted.”

The company has rejected claims its machines changed votes cast for Mr. Trump into votes for Mr. Biden.

Sidney Powell, a Trump lawyer, declared, “What we are really dealing with here and uncovering more by the day is the massive influence of communist money through Venezuela, Cuba and likely China in the interference with our elections here in the United States,” said Fox News. “She attempted to link election software in several states with a company founded ‘at the direction’ of former Venezuelan dictator Hugo Chavez, who died in 2013. Dominion has repeatedly rejected accusations about vote switching and software issues.”

It also rejected “absurd” notions of links to Venezuela or Cuba.

“What’s going on in this country is not to be believed,” Trump said in the interview. “Why isn’t the FBI all over the place?”

“They’re not, they’re not, it’s an incredible thing,” Mr. Trump said in the Fox News account. “They’re not and it’s an embarrassment to our country.”

But, as Newsweek noted, “The FBI is led by director Christopher Wray, who Trump appointed in 2017. The Justice Department is led by Attorney General William Barr, who the president nominated in late 2018. Since he took over the Justice Department in early 2019, Barr has been strongly criticized by Democrats, and some Republicans, for acting more like the president’s personal lawyer than the top attorney representing the American people.”

“Although the Trump campaign has filed dozens of lawsuits in multiple battleground states in a bid to overturn election results, judges have dismissed nearly all of the cases. Even conservative judges—including a Trump appointee—have rejected the unfounded claims, pointing out that the president’s lawyers have not presented evidence to support them,” Newsweek reported.

“The president also took aim at Georgia’s Governor Brian Kemp, a Republican who the president endorsed in 2018. Some Georgia election officials have faced significant criticism and even death threats in the wake of the state’s initial results and hand recount showing that Biden beat Trump in the southern state by a narrow margin of about 12,000 votes,” said Newsweek.

“You, my poor, pitiful brothers and sisters, you are opting to be a part of that that is unraveling right in front of your eyes.  You see the country cascading downward.  You see the moral fiber of America getting into the gutter.  Who wants a membership in a house of whores?  Bought and paid for leaders.  Nobody can stand up if the enemy says, ‘you don’t stand up for that.’  Satan is having a field day with America.  Evil has been made fair seeming, warned the Honorable Minister Louis Farrakhan in a major message earlier this year. His subject, “The Unraveling of a Great Nation,” was delivered in February at the TCF Center in Detroit to close the Nation of Islam’s 2020 Saviours’ Day national convention.

“When you unravel something, you undo twisted, knitted, or woven threads; you investigate and solve or explain something complicated or puzzling.  The condition of America is puzzling.  The world is looking at a country going to hell,” he warned.

“The world is looking at a President who wants to be king; when the Constitution and the Founding Fathers were trying to run away from what they suffered in Europe under the kings.   There’s a verse in the Qur’an, it’s in the 16th Surah, the 92nd verse and it says, ‘Be not like her who unravels her yarn, disintegrating it into pieces, after she has spun it strongly.’ Her here is not talking about a woman, as such, but if you see somebody knitting something, with a design, and they leave it not secured one stitch; and then the same woman who stitched it strongly starts pulling on the yarn that she has knitted until it comes to pieces.  That’s what’s happening to America as we speak,” said the Minister.

“America was not built on a firm foundation.  Although the weaving was done strongly, the nation called America was doomed from its inception.  How do you build a nation killing the native people?  How do you build a nation, bringing a whole people out of Africa to America to be made slaves?  This is your foundation, so for them to lie to you, and make you think that America is a land of promise for you, and you believe it; no wonder Jesus said, You shall know the truth and the truth will set you free,” he continued.

“Mr. Trump, you’re written of in the scriptures in many places.  I am, too. Nebuchadnezzar, the king of Babylon, once had a heart like a human being; and God took out of him the heart of a man and gave him a heart of a beast.  See, Mr. Trump, when you were running for the office, you talked about going into Iraq and taking the oil. That’s thug talk.  That’s the talk of a beast. Beasts eat when they’re hungry.  They don’t ask permission to kill their prey.  That’s their nature.  So, the Bible talks about four great beasts.”

He added, “America, Mr. President, needs to repent for what you’ve done and what you continue to do to the peoples of the world.  You have Ten Commandments, ten beautiful commandments that America does not follow. … Mr. Trump, America has interfered in the elections of 81 nations. Mr. Trump wasn’t it your government that went down to Venezuela? You don’t like Nicolas Maduro. What did Maduro do? He’s got oil down there, too. So, you go and choose Juan Guaido. He’s a handsome young man but he wasn’t elected by the people. … Mr. President, I’m asking you to repent on behalf of the wickedness of your people, White people, for the evil that you have done to self, to others, to us, to the Native people, to the Indigenous. Wickedness is what’s making America suffer.  Have you seen the weather?  You know the weather is against you.  All of you can get together and try to stop what you call climate change.  Climate isn’t controlled by you. Climate is being controlled by the God who is here in control of the climate.”

“Look at the scripture, “Babylon is fallen, is fallen.”  Substitute America for Babylon. She’s unraveling. America is falling, is falling. Why are you falling, America?  Because you have become the habitation of devils. A hole for every foul person, a cage for every hateful bird,” said Min. Farrakhan.