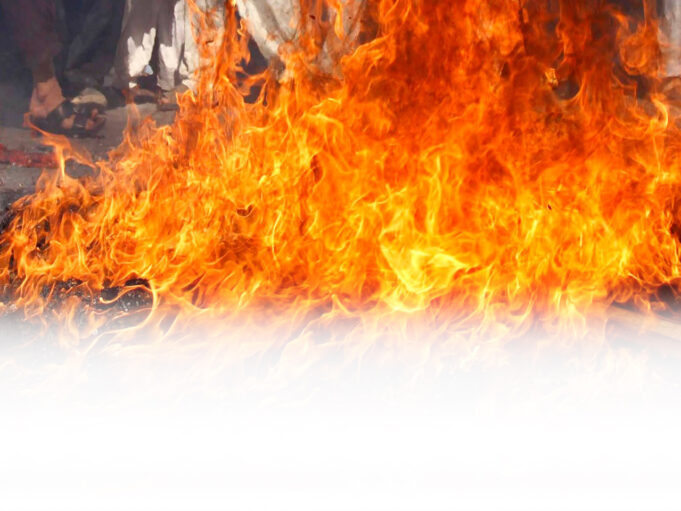 [Editor’s note: The following article is based on excerpts from an address, “The Wrath of God,” delivered by Minister Farrakhan at Mosque Maryam in Chicago, Illinois on July 1, 2001. To order this message in its entirety please contact us via phone at 773-602-1230 ext 200.]

We all have had some kind of religious experience. Either we went to church, synagogue or the mosque and we heard the preacher talk about God’s Judgment. Sometimes the reverend would say it in a way that would make it so frightening—and the Judgment of Allah is a frightening thing. The pastor would get us to act better by terrifying us. There is something about fear that makes people do things in order to escape what they are afraid of. When you pick up the Bible and the Holy Qur’an, you read about the Judgment in a way that is so terrifying that today many pastors don’t want to talk about it. We want to talk about the Grace of God, the Mercy of God, the Forgiveness of God. But very few want to talk about the Wrath of God.

Each of us as human beings created in the image of God can, on occasion, become angry. When you are angry you are capable of doing that which under normal emotional circumstances you would not do. Anger has degrees to it. I can be angry and have my anger under control. You may see a fire in my eyes, you may hear something in my words, but, I’m keeping myself under control. But, there is another kind of anger when we allow it to get to that point where we are unable to control the reaction that comes from our anger. We reach a point then of insanity. We have lost the balance. Then what comes from our mouths, what comes from our hands, can be very destructive.

The Bible says a wise man will be slow to anger. If you visit the prisons, we see many, many inmates, male and female, who are there, not because they are bad, but a circumstance came up in their lives that ignited the passion of anger. They lost control, and in that moment of loss of control they reached for something to inflict pain on the object of their anger. When it was over and the anger subsided, someone lay wounded, someone lay dying, and a human being was sent to prison for many years because we lacked control of the emotion called anger.

In the Book of Genesis in the Bible, God gave Adam instructions and Adam disobeyed. Allah (God) became displeased and He was angry with Adam. God’s anger was controlled. He was going to punish Adam, not kill Adam. When we, in our homes, make a judgment against our children and we wish to inflict pain on them to teach them a lesson, sometimes we are so stressed out that we literally do terrific harm to both the body and the mind of our children because we couldn’t control our anger.

Adam and Eve had two children, Cain and Abel. The Bible talks about Abel and Cain making an offering to Allah (God) and Allah (God) accepted the offering of Abel but rejected the offering of Cain. Some words of the Bible say that “the Lord had respect unto Abel and to his offering: But unto Cain and to his offering he had not respect.” Most of us, when we think we’ve been disrespected, it kindles anger. But the thing that has been wounded is your self-concept, which is your ego, and because you may not have the characteristic of humility you see disrespect as a great insult. If the disrespect is fueled by another passion called envy, then it leads us to anger. The Bible says, “And Cain was very wroth, and his countenance fell.”

Whenever you are angry, there is a change in your countenance. “And the Lord said unto Cain, why art thou wroth? and why is thy countenance fallen?” That’s a good question. God knew why Cain was angry, but he wanted Cain to examine the motive for his anger. Is it my bruised ego that makes me angry? Did somebody really wrong me? Why am I angry? And why is my countenance fallen? Then God said to Cain, “If thou doest well, shalt thou not be accepted? And if thou doest not well, sin lieth at the door.”

When you are angry, right at the door of your anger is sin. Now your passion is about to cause you to break the law. Allah (God) talked to Cain and asked him to analyze why he felt anger. There is nothing that hits the ego as hard as being rejected in comparison to something and somebody that appears to be accepted. In every family there are children growing up, some feeling accepted, some feeling rejected. And the more rejected you feel, the uglier your countenance becomes.

Anger has to be controlled, lest in our anger we harm what we love. Jesus got angry. It seems to me that he seemed greatly disturbed over the moneychangers in the temple. They were defiling the house of God because they loved money more than the principles that the house is founded upon. So, Jesus went to driving them out of the temple with anger; but his anger was controlled. He let them know he was angry, why he was angry and he took an appropriate action—controlled anger, controlled disapproval, controlled chastisement. The result was they understood there was another side to Jesus. Though loving, though kind, though merciful, though sweet, there was another side. No matter how good any of us think we are, we are all capable of doing horrendous things when circumstances make us angry and we lose control in that moment of passion.

When you live in a society or world like this that is founded on racism, sexism and an unbridled materialism, we who have been servitude slaves, never finding justice, have anger in us. We have anger, not because we think we have been disrespected. We know we have been disrespected. And if God ever asked us, like he asked Cain, why is your countenance fallen and why are you angry? We could say, God, it is because of 400 years of injustice, 400 years of watching our women raped and disrespected, our children slaughtered, why shouldn’t we be angry? And one day the anger will not be able to be controlled. God is going to let the anger loose like a mighty hurricane or tornado or earthquake or volcanic eruption. Then America will know that the price of injustice is the destruction of the country.

Whenever Allah (God) is angry, His anger is justified. And when He lets loose His anger, the destructive fury of His power destroys everything that it touches. The Bible says, “Behold, the day cometh, that shall burn as an oven; and all the proud, yea, and all that do wickedly, shall be stubble: and the day that cometh shall burn them up, saith the Lord of hosts, that it shall leave them neither root nor branch.” When Allah (God) comes to pluck up the wicked, He is not cutting off a branch. He’s killing it at the root.

Pastors today speak of the goodness of Jesus Christ, the mercy of Jesus Christ, the love of Jesus Christ, but they are a little slow in preaching the Wrath of God through Jesus Christ. When Moses met God in a burning bush, the bush was burning but it was not consumed. The Honorable Elijah Muhammad said the anger of God was so great, yet, controlled. The bush never burned, but the fire was there. God withheld His wrath and sent His servant to Pharaoh to give Him a chance because God must not be untrue to His own nature. He must show mercy and must be willing to forgive even the worst enemy. He must give you a chance to receive of His grace. So He controls His anger and He sends you a Warner. Then He sits back and watches how you treat the warning.

We are in the time of Judgment. When Allah (God) renders His judgment, He wants us to agree with Him. So He’s patient. He will send His Judgment down and then wait on you to come around because at first you may think God is wrong. When Allah (God) told Abraham that He was going to destroy all the people of Sodom and Gomorrah except Lot and his family, Abraham asked Allah (God), would He destroy the righteous along with the wicked? God didn’t say yes or no. He told Abraham to see if he could find 50 righteous. God said if Abraham found 50, He would save the city. He gave him a job. Prove My Judgment wrong. But, Abraham couldn’t find 50. He couldn’t find 40. He couldn’t find 30. He couldn’t find 20. He couldn’t find 10. God still tried him. He told Abraham to go back and find one. And when Abraham came back and couldn’t find one, it said that fire and brimstone fell on Sodom and Gomorrah that same day. Why? Because God does not want us to disagree with His judgment. When He sends His Judgment He gives you a period of grace that will allow the wicked to repent and the righteous to understand.

I live in America. It’s the greatest country on earth, but it’s the most wicked. America boasts, “I sit a queen, and am no widow, and shall see no sorrow.” She has bombed out cities of other nations and brought other nations to total ruin, not losing a plane or a pilot. She is the only remaining superpower and God made her that for His purpose. Will you submit America or must you be taken and destroyed?

When God sends down His Judgment, He makes a decision. He says, “Behold, I make all things new.” Not some things—all things. Then He says, “there will be a new heaven and a new earth and the former things shall pass away.” This is a no good world because it is ruled by the enemy of God. So, when God starts judging a world in which America is the chief, she is the head of a world, that means nations have to pass away. Kingdoms have to pass away. Systems have to pass away. And people who operate systems, who uphold the kingdoms, and are in the nations that fight against the Kingdom of God, all have to go.