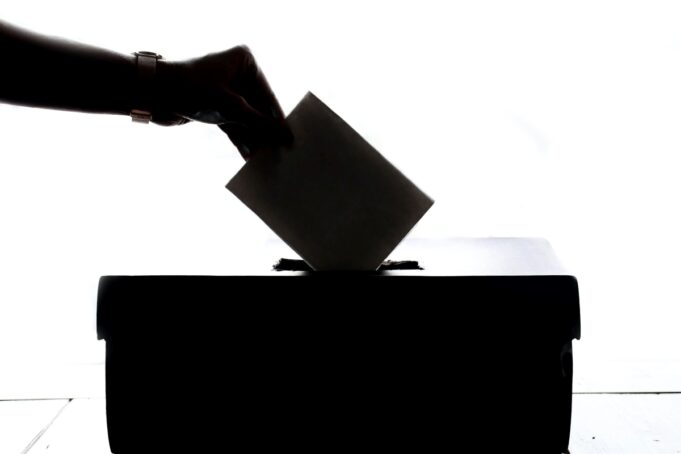 More than 6,400 Indigenous people representing 50 tribes across the country participated in the survey from June to August. The authors say it was the first study by Indigenous people for Indigenous people, “aimed at understanding the priorities and needs of Indigenous individuals and communities in the United States.” And according to the authors, “it’s imperative that Native peoples, perspectives, and issues are present in conversations about the future of this country.”

A historic turnout for hard-hitting issues

One of the biggest conclusions drawn from the study, released in October, is that even with barriers to voting, Indigenous people are politically active and vote in high numbers. In fact, about 77 percent of participants said they voted in the last local, state, and/or national election prior to the 2020 election. And according to reports and organizers, that percentage may have surged this year.

“The turnout to me was historic, but the turnout wasn’t for a particular party or a particular candidate,” said Oliver “O.J.” Semans. Mr. Semans is a member of the Rosebud Sioux Tribe (Sicangu Oyate) and co-executive director of Four Directions, a nonpartisan Native American voting advocacy group. “The turnout was based upon issues that were created by the parties or the candidates,” he said.

According to Mr. Semans, some of those issues include many that have popped up over the past three or more years, while the survey found that some important issues include mental health and violence. The survey also found that 51 percent of participants identified as Democrats, bringing more blue to otherwise red states, but Mr. Semans says that’s not the only thing that matters.

“Yes, you can see from looking at the map where there’s nothing but red, all of a sudden you’ll see blinking blue lights in the state and those are reservations, but that’s only because of the issues that were piled on Indian Country in the past three plus years,” he explained.

“That was the executive orders that allowed pipelines to continue, even though they were in court. That includes the desecration of sacred sites, the destruction of sacred burial sites. Before election day, [the president] telling Indian Country that he doesn’t believe in them, he believes in Columbus. I mean, you’re not gonna see people rushing to the polls to vote for him after hearing that.”

And many of them didn’t. According to the Associated Press, Native American voter turnout surged in Arizona compared to 2016, helping Joe Biden to secure the state. It was a similar scene in Wisconsin. Those two swing states were part of a list of seven swing states targeted by Four Directions last year. For the 2020 election the organization identified those seven states as having the highest concentration of Native Americans (Michigan, Wisconsin, Arizona, Minnesota, North Carolina, Nevada and Colorado) and began contacting tribes and tribal organizations there to discuss partnering. They held two forums, where candidates spoke about Native issues.

The survey identified some of the major roadblocks to voting as not receiving the absentee ballot on time, not being able to access the polling places because of work hours and more. Also, according to the Center for Public Integrity, the Covid-19 pandemic has hit Native American communities at an alarming rate, which also presented a big hurdle when it came time to vote. Other challenges included high rates of poverty, far polling places, limited access to transportation and more.

Advocating for their own

There are specific aspects Native American voters pay attention to when choosing a candidate on any level of government. The Indigenous Futures survey found that the majority of participants are motivated most by a candidate’s political platform and track record on Native American and tribal issues.

Another finding from the study, which could seem to be a paradox, is that 96 percent of participants do not trust the U.S. government to make good decisions about Native American issues, while 91 percent do not trust local and state governments to do the same. Mr. Semans says that voter turnout doesn’t show an increase of faith in federal and state governments, but it shows Native Americans advocating for their own.

“What you are seeing is that by participating in state and federal elections, the tribes are actually getting elected officials that understand or at least have an idea [of] what treaties and sovereignty is,” Mr. Seaman explained. “So even though there is a big distrust between the federal government and the state, what you’re seeing is the tribes picking out individuals that they want to support, basically to ensure the protection of their treaties and their sovereignty.”

This was evident in the 2018 election, when the first two Native American women, Deb Haaland, a Laguna Pueblo from New Mexico, and Sharice Davids, a member of the Ho-Chunk Nation from Kansas, both Democrats, were elected to the U.S. House of Representatives.

Indian Country is pushing for Ms. Haaland to be part of Mr. Biden’s cabinet as the secretary of the interior.

“From a child, [she] was brought up to respect the land and the resources, and what better person to manage that land and resources than one that has respect for it?” Mr. Semans said. “I think that’s going to be [an indicator] of whether or not they really, truly appreciate how the Native vote turned out.”

More work to be done

Due to some of the findings from the survey, the authors propose three ways to help Indigenous voices be heard and empowered. They include, motivating Indigenous people to vote and advocate for the needs of their communities; listening and gaining an understanding of the issues they face; and standing with them as they work toward a brighter future for future generations.

With the youth vote being lower than that of older participants, partially because 1 in 5 youth don’t believe voting matters, over the years, Indigenous groups have put much focus on getting youth to the polls. Mr. Semans says after working with youth counselors and shifting strategy, Four Directions was able to get a higher youth turnout.

“Especially this year. It dramatically increased since the 2018 election,” he said. “This was a stance of protesters not only protesting but going to the polls.”

Four Directions remains on the ground in Georgia, identifying the 100,000 plus Native Americans there who are of voting age. They are now trying to get them registered for the Georgia special election in January for control of the U.S. Senate.

With all the work being done and surveys being conducted, Native Americans have shown their collective power at the polls.

“The Native vote was an actual swing … they swung the election one way or the other,” Mr. Semans said. “This (Biden-Harris) administration owes a lot to the turnout.”