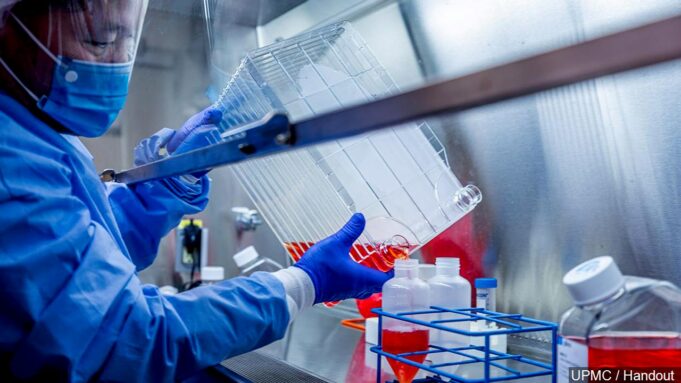 Pharmaceutical giant Pfizer and its partner BioNTech have requested emergency use authorization from the U.S. Food and Drug Administration for their Covid-19 vaccine claiming a 95 percent success rate, and Moderna, Inc., boasting its vaccine is 94.5 percent effective, intends to follow suit in coming weeks.

At Final Call presstime, a third pharmaceutical company AstraZeneca reported its late-stage trials showed its coronavirus vaccine was up to 90 percent effective. According to Associated Press reports, AstraZeneca’s announcement was “giving public health officials hope they may soon have access to a vaccine that is cheaper and easier to distribute than some of its rivals.” The results are based on interim analysis of trials in the U.K. and Brazil of a vaccine developed by Oxford University and manufactured by AstraZeneca. No hospitalizations or severe cases of Covid-19 were reported in those receiving the vaccine, reported AP.

Prior to news breaking about AstraZeneca, Dr. Alex Azar, director of the Department of Health and Human Services, and Dr. Anthony Fauci, director of the National Institute of Allergy and Infectious Diseases, lauded the vaccines by Moderna and Pfizer / BioNTech in White House briefings, saying “help and hope is on the way,” and the “cavalry is coming.”

But not so fast, cautioned advocates, who argue there has never been a successful coronavirus vaccine, and despite the declarations and celebrations, there is not one now.

The Honorable Minister Louis Farrakhan said these words earlier this year: “We will not accept your vaccine, so you can slow down, because whenever you bring it out, it’s for your people. You give it to them, because we are not accepting death. You are the very representative of death.” Min. Farrakhan delivered these remarks during a worldwide message titled, “The Criterion” on July 4 from his home in Michigan.

“In light of this message from the servant of God in our midst, how can we even consider the claims of Pfizer and Moderna that what they have made is safe and effective?” asked Student Minister Ava Muhammad, national spokesperson for Minister Farrakhan and the Nation of Islam.

“It is a fact that there has never been any success creating coronavirus vaccines. That is why there is no cure for the common cold,” she told The Final Call. “These new vaccines from Pfizer and Moderna are completely experimental and totally dangerous. The new one is called mRNA. It alters the human RNA and DNA.

“This is genetic manipulation to try and kill the coronavirus by turning our bodies into protein manufacturing plants. Because most Black people, due to diet and environment, have hypersensitive immune systems and are already unhealthy, we are almost guaranteed to overreact to the actual disease after this vaccination to the point that we will experience serious disease or death. Thus, Minister Farrakhan charged these people with being the ‘very representative of death,’ ” Min. Muhammad stated.

“Most significant is that the process they use, called transfection, is the same process used to create GMOs. It will be years before the full extent of the change in the human genome is fully manifested. Moderna was founded on the idea of modifying human biological function through genetic engineering,” she added.

Some scientists, epidemiologists, medical doctors, and virologists also question the big drug makers’ wonderful claims. Pfizer said, “protection is achieved 28 days after the initiation of the vaccination, which consists of a 2-dose schedule,” but also reports “as the study continues, the final vaccine efficacy percentage may vary.”

Further, Pfizer said the Data Monitoring Committee which conducted an analysis in early November has not reported any serious safety concerns and recommends that the study continue to collect additional safety and efficacy data. The data will be discussed with regulatory authorities worldwide, Pfizer announced in a press release.

The companies issued unprecedented claims in press releases, advocates noted. It’s profits over public health, they charged. They noted the vaccines were developed in a fraction of the usual 10-15 year production process.

The clinical trials have nothing to do with preventing transmission of the virus, and, not one vaccine is designed to prevent the spread of SARS-CoVI-2, a coronavirus that causes Covid-19, but it is designed to lesson symptomatic infections, according to Dr. Mikovits.

“The behemoth biotech companies are projected to split over $100 billion in sales, according to the investment banking advisory firm Evercore ISI. Moderna has already received both $1 billion in research grants and another $1.5 billion from the U.S. government for its first vaccine order,” said Min. Muhammad, who is also an attorney.

Pfizer and BioNTech expect to produce globally up to 50 million vaccine doses in 2020 and up to 1.3 billion doses by the end of 2021. By the end of 2020, Moderna expects to have approximately 20 million doses of its vaccine ready to ship in the U.S. It also remains on track to manufacture 500 million to 1 billion doses globally in 2021, according to statements by the company.

Dr. Moucef Slaoui, head of Operation Warp Speed overseeing Covid-19 vaccine operations, told CNN the federal government already has up to 20 million doses of the vaccines to distribute and the plan is to dispatch millions of doses on a weekly basis.

“The pharmaceutical industry is the largest lobby in Washington, D.C., and owns both parties. So Congress has passed laws that shield these companies from all lawsuits stemming from defects in the design of a vaccine. They are 100 percent indemnified from any vaccine used during a ‘pandemic.’ There is no incentive to make them safe. This is all profit, free and clear, a win-win situation,” argued Min. Muhammad.

America had reached more than a quarter of a million deaths and over 11 million infections at Final Call press time. President-elect Joe Biden said he plans to deliver 330 million vaccinations to the American public. He further said in a press briefing following a virtual meeting he and Vice President-Elect Kamala Harris had with several governors that vaccine distribution would take a massive public relations campaign. And require outreach to traditionally undeserved communities hardest hit by the pandemic, namely Black, Brown and Indigenous people.

New York Governor Andrew Cuomo has said the vaccine is moving fast partly because Pfizer, Moderna, and Johnson & Johnson know billions of dollars are at stake in a rush to get to the market first, and the vaccine development was tied to President Trump’s ego.

Gov. Cuomo said his state will lead the way and mobilize an army to vaccinate all New Yorkers fairly, referring particularly to Black and Brown communities heavily impacted by the coronavirus.

In a recent White House briefing, President Trump criticized Pfizer, and alleged the company sabotaged his election. “Big Pharma ran millions of dollars of negative advertisement against me during the campaign—which I won, by the way, but you know, we’ll find that out. Almost 74 million votes,” declared President Trump.

Some have pushed for safety protocols like wearing masks, hand washing, social distancing and other strategies. Others say alternatives and therapies, and use of Vitamin C, Vitamin D, and interferons, should be tried instead a headlong vaccine-only rush.

Meanwhile in Washington, D.C., opposition to D.C. City Council Health Committee passage of the Minor Consent for Vaccinations Amendment Act, which allowed children age 11 to get vaccinated without parental consent, is growing. A bill introduced by Councilmember Mary Cheh initially passed on Oct. 20. One Black city councilman who supported the measure later changed his vote to “no.” But the bill passed 10 to 3, with Health Committee Chair Vincent Gray’s amendment mandating providers bar insurers from sending vaccine information to children’s homes to protect them from potential retaliation. The next stop is Mayor Muriel Bowser’s desk for approval.

“The die was already set,” stated Student Minister Abdul Khadir Muhammad of Muhammad Mosque No. 4, Mid-Atlantic regional headquarters of the Nation of Islam in Washington, D.C. “This was kept quiet … as I began to call and pound the pavement to find out who knew about it, none of the brothers that are pastors, well known, no one knew about it,” he said.

“Some called it devilish. Some called it outrageous. My words are that this is surreptitiously barbaric, and they had no concerns for our young children that will be given this permission to take the vaccine on their own without their parents’ permission,” stated Min.  Khadir Muhammad.

Reverend Willie Wilson, retired pastor of Union Temple Baptist Church, is disturbed by the bill. He has concerns about vaccine safety, the great extent to which Blacks have been experimented on for centuries, and that the bill takes away parental authority and responsibility for their children.

The key now is to raise the consciousness of the people, so that parents will stand up and take their rightful authority and responsibility and not allow the government to dictate that their child have to take a vaccine, Rev. Wilson told The Final Call. After any injuries, big drug companies may be fined millions of dollars, but by that time they’ve made billions and lives may have been lost, he said.

“But for our people, we know the extent to which not only the pharmaceutical company is making a lot of money, but there’s always that question as to what this is really all about and whether or not it’s just another ploy to get rid of a lot of people of color. And that’s why my position has been let them take it first. Let them go ahead and take it. I certainly won’t be encouraging people to just jump right in and take this vaccine,” he said.