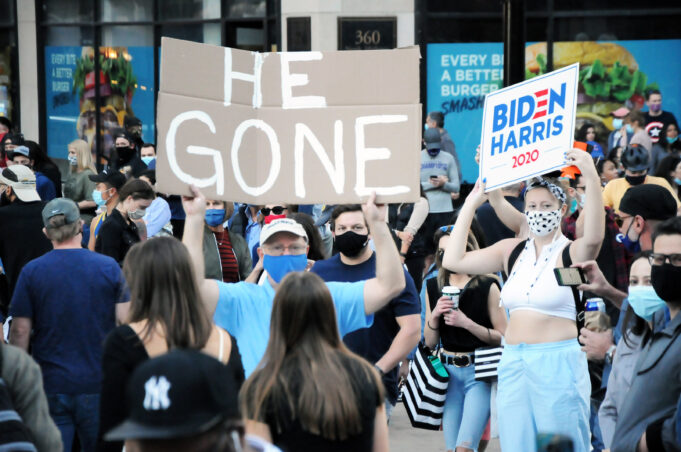 Joseph R. Biden Jr., former vice president and longtime politician, ascended to the White House with words that were in many ways fitting for a nation that finds itself fractured politically, racially, socially, and economically unraveling.

In a short Nov. 7 acceptance speech, the president-elect pledged to work for all Americans to bring the country together.

He claimed a mandate with 76 million votes at Final Call presstime and clinched the win with an impressive electoral college victory.

“My fellow Americans, the people of this nation have spoken. They have delivered us a clear victory.  A convincing victory. A victory for ‘We the People,’ ” said Mr. Biden.

“I am humbled by the trust and confidence you have placed in me. I pledge to be a president who seeks not to divide, but to unify. Who doesn’t see red and blue states, but a United States. And who will work with all my heart to win the confidence of the whole people. For that is what America is about: the people,” he said. “I sought this office to restore the soul of America.”

Those are the type of words that the nation may need to hear but it will take more than words to accomplish what the president-elect wants to accomplish—if it can be accomplished at all.

America’s challenges do not just include the partisan politics, a reckless and recalcitrant outgoing chief executive, dangerous levels of emotions among a highly armed population, racial discord and questions about her economic future.

America is under divine chastisement from God Himself for her cruel murder and mistreatment of Black people, our enslavement, and genocide against the Native Americans. America, like past nations divinely condemned in the past—Babylon, Egypt, Rome—has committed great evil. If others were judged in the past, can she escape judgement today?

And, can the “soul” of America be restored ignoring those who have suffered and still suffer the most? Not to mention this same group, Black people, rescued Mr. Biden, and if you believe Mr. Trump was a threat to America herself, Black voters again saved American Democracy. Yet, we don’t and have never fully benefitted from so-called democracy.

Can Mr. Biden change that? Does he have a desire to even confront this reality?

Having Kamala Harris as the “first woman, first Black woman, first woman of South Asian descent, and first daughter of immigrants ever elected to national office in this country” is not enough.

Cabinet secretaries, who serve at the behest of the president and execute his agenda, are not enough.

“It’s long overdue, and we’re reminded tonight of all those who fought so hard for so many years to make this happen. But once again, America has bent the arc of the moral universe towards justice,” declared Mr. Biden. “And especially for those moments when this campaign was at its lowest—the African-American community stood up again for me. They always have my back, and I’ll have yours.”

What does that mean? How far can the president-elect go with Democrats already saying Mr. Biden must govern from the center—and essentially appeal to White voters and White sensibility?

“Notice how it’s Black & brown people catching it on all sides from White people right now who are making the same basic argument that we need to focus on white ppl, whether it’s considering the feelings of Trump supporters, making appeals to white voters or ‘moving to the center,’ ” activist Bree Newsome Bass said via Twitter.

She added, “We’re not uniting the working class when the majority of the working class is nonwhite & folks are saying we need to make more appeals to White people who vote for a blatant white nationalist b/c they resent the idea of racial equality.”

Mr. Biden faces serious, serious challenges and Mr. Trump is not going to go quietly into the night. Mr. Trump is still mounting a fight and Republicans are backing his assertion that he won the 2020 presidential election, at least for now. So there is a serious crisis inside of America and it is operating on all levels.

A winner may have been declared for a presidential election, but the future for a divided nation is not certain at all.