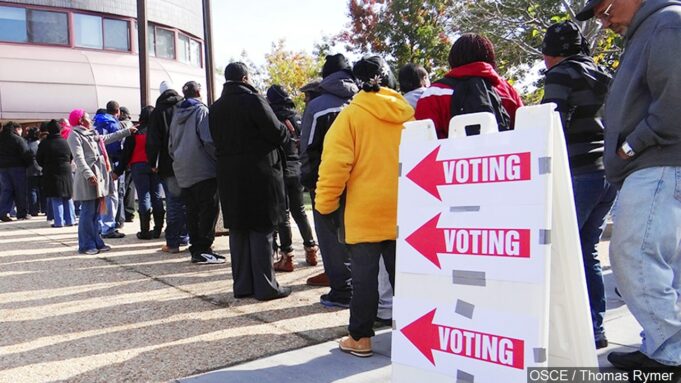 In a 17-minute acceptance speech before a mass drive-in of honking horns in Wilmington, Delaware, President-elect Joseph Biden thanked his vast coalition of supporters in an election he described as the most diverse coalition in history. In the Nov. 7 remarks he named Democrats, Republicans, independents, progressives, moderates, and conservatives, among those that supported him.

He thanked the young and old. Urban, suburban, and rural; Whites, Latinos, Asians and Native Americans. At presstime Mr. Biden garnered 290 electoral votes—over the required 270 to become president—and won over 76 million popular votes. He gave a specific shout out to Black voters, crediting them with saving his campaign on several occasions.

“And especially for those moments when this campaign was at its lowest—the African-American community stood up again for me. They always have my back, and I’ll have yours,” said President-elect Biden.

Every four years Blacks are pushed and prodded to engage in national elections by candidate surrogates and Black politicians as Democrats and Republicans vie for rulership in the United States. Overwhelmingly in 2020, the appeal was to back Joe Biden, former vice president, and running mate Senator Kamala Harris of California. Yet, the condition of Black folks has gone relatively unchanged over decades of involvement in this political process.

The Black vote is constantly sought; however, reciprocity has consistently been lacking, many complain. Because of the current political arrangement and how Blacks engage the process for better or worse, Mr. Biden, like past politicians, rode a wave of Black support absent a specific promise of a substantive return and what that political return would be.

“In fact, the way in which we have been engaging this political process … is really a manifestation of the mental illness of our people,” Ms. Dillard argued.

Ms. Dillard, who also hosts a social media talk show, described the condition in scriptural terms as a “stronghold” and “vain imagination” that must be broken.

She told The Final Call that it’s important to recognize how “spiritual and mental” elements factor in why Black people continue to be in the  same position.

“The actions of our people to support something for nothing is not only classic slave behavior. It’s nonsensical … not logical,” added Ms. Dillard. She contends where “facts” and “common sense” don’t persuade Black folks is an indication of a spiritual issue.

The way Black people are indoctrinated in America is the problem in her view. “It’s a conditioning and a programing. There’s malware that’s been in our people for hundreds of years,” said Ms. Dillard.

She sees Black political advocates and politicians who peddle Black voters as trying to “revive a dead thing” while God is offering Black people a  promised land, according to the Teachings of the Honorable Elijah Muhammad, patriarch of the Nation of Islam.

When asked what the equation would look like absent the sickness, Ms. Dillard said self-determination.

“Absent this sickness it will look like a unified demand for separation, land or reparations. It would be a combination of these things … at least a start with one of those elements,” stated Ms. Dillard.

While demands are being made, she said, Blacks must engage in making their neighborhoods safe and decent places to live, teach their own children, double down on support of Black business and establish Black towns.

Black people pursuing salvation through the political process leaves Blacks in an inferior position and with no clear future, argued other critics of mainstream politics.

The danger of this election with Mr. Biden’s victory is Blacks becoming pacified thinking they won something, said Assemblyman Charles Barron of Brooklyn, N.Y.

“And a few negroes will get some high positions … and yet our people, the masses, will still be in poverty,” Mr. Barron argued.

Some see Mr. Biden’s “Lift Every Voice Plan for Black America” as an empty promise and doubt it will be fulfilled while he faces a slightly smaller advantage in the Democratic House and a possibly stacked Republican Senate. Furthermore, they doubt the commitment of Black lawmakers to exert political will and demand presidential accountability and delivery of benefits to Black voters who saved Mr. Biden in the primary and general elections.

Mr. Barron said there was no win in Mr. Biden nor Mr. Trump. “Especially when you have Black leaders that are transactional leaders—they cut deals—not transformative leaders trying to change a system,” he said.

The Black leaders who pushed Mr. Biden on Black people never got any solid commitments from the former vice-president, he observed. “They emotionally manipulated the fear of Donald Trump,” he said. “As though fascism … racism … surveillance of our communities started with Trump,” said Mr. Barron.

As vote counting was still underway days after the Nov. 3 election; House and Senate results were nothing like the blue political tsunami Democrats expected, and Blacks invested hope in. The Democrats failed to deliver a Senate majority, expand their House majority, or capture new state legislatures ahead of the next congressional reapportionment. The outcome ensures more partisan gridlock for the 2021-2024 presidency.

Mr. Biden’s failing to crack open the political map raises the question: How much focus he can really place on Black specific issues, even if he wants to deliver to Black voters? There is already talk that Mr. Biden will have to govern from the center to bring the country together and he has pledged to work to unite America and work across party lines.

“We don’t see presidential elections as personality contests, where one is worse or better than the other,” said Assemblyman  Barron. “We see all elections and electoral processes as a strategy … a tactic, not a panacea,” he added.

The longtime elected official told The Final Call that Black people are not going to be able to vote their way to freedom.

Assemblyman Barron sees revolution and separation as the only solution. In the meantime, he says Blacks must use the electoral process to deliver material benefits “for our people,” such as renovated schools, parks and quality of life services. But, he said, leaders must also raise consciousness on the need for radical, systemic revolutionary change.

“For Black people, there was no win in this election,” said Assemblyman Barron.

For the Democratic Party Blacks have been its most loyal and trusted constituents. But with the overwhelming support from Black voters how willing are Blacks to push back or demand anything from Mr. Biden’s administration in asserting Black agendas and interests?

“We have to relentlessly demand what we want and continue to do so, no matter what,” said Johnnie Cordero, chairman of the South Carolina Democratic Black Caucus. “I don’t believe that freedom ever comes to a people satisfied with anything short of freedom,” he added.

In the national election, Mr. Biden benefitted from Black belief in the Democratic Party. Twice the Black vote was summoned to keep him on the map of victories, starting in the South Carolina Democratic  primary earlier this year where the endorsement of Majority Whip Jim Clyburn delivered the Black vote to Mr. Biden, rescuing his losing campaign. In the presidential race, Blacks voted in high numbers for him.

Ninety percent of Black support went to Mr. Biden, as it did Hilary Clinton in 2016 and Barack Obama during his eight-year presidency. Leading up to the 2020 election an October New York Times/Siena College Research Institute poll showed Black people said they trusted Joe Biden to do a better job on the economy, and 88 percent felt he was able to unify America and maintain law and order. Nationally, Black voters overwhelmingly backed Mr. Biden by a margin of 87 percent to President Trump’s 12 percent, according to exit polls.

“Today, not tomorrow, not January 1, not Inauguration Day a few weeks later, is the day that we begin fighting to hold Joe Biden accountable,” said activist Shaun King in a Nov. 6 Tweet.

“Not only for his campaign promises, but to make sure his cabinet, his senior staff, and his policies look (and think) like his voters,” said Mr. King.

What has the Republican Party or Democratic Party done for Black life over the last century? “The Black man of America has been privileged by the slave masters’ children for the last century to vote for Whites for the offices to judge and rule,” wrote Nation of Islam patriarch Elijah Muhammad in an article called the “National Election,” published in 1973 in his captivating book, “The Fall of America.”

“This freedom to vote has made the Black man in America feel very dignified and proud of himself. He goes to the polls very happy to vote for a White ruler. Today, he is gradually changing to a desire to vote for his own kind for such offices of authority,” Mr. Muhammad wrote.

He observed, however, the Black vote is strong and powerful only when and where the White man can use it to gain office over his White opponent. However, after the election and victory, few favors come from his office to the Black voters who aided him in getting in office, Mr. Muhammad pointed out.

“The Black vote could be cast or not cast. The White citizens of the government are going to win and continue to rule anyway,” Mr. Muhammad said.

According to Pew Research the number of Black Americans eligible to vote for president reached a record 30 million in 2020, more than one-third of Blacks live in nine of America’s most election competitive states—Arizona, Florida, Georgia, Iowa, Michigan, North Carolina, Ohio, Pennsylvania and Wisconsin—a higher share than the 29 percent of all U.S. eligible voters who live in these states.

Nationwide, Whites are about 69 percent of eligible voters and Blacks make up 11 percent of the U.S. electorate, according to Pew Research.

Even some Whites see the lopsided relationship between the Black voter, the White power structure and America’s well-being.

“Looking at Black voters in Milwaukee, Detroit, Philadelphia, and Atlanta, it’s striking that people who have been treated the worst by our democracy consistently do the most to save it,” Ben Rhodes, former deputy national security adviser to President Obama, tweeted Nov. 4.

America knows her crimes against Black life and has not moved to remedy it through reparations or substantive public policy.

Blacks gaining anything substantive for their votes from the Democrat or Republicans remains doubtful, say many. Without a comprehensive Black agenda that speaks to Black progress, needs, self-determination and that also addresses protection, preservation, and Black advancement, their position will not change, they add.

“Our problem … is that we keep thinking that hope is going to save us,” said Mr. Cordero.

Mr. Barron said it is time to fight for Black liberation and build, as a tactic, a Black radical electoral movement that deals locally.

“All politics is local. From the bottom up, we make revolution … radical change, not from Biden down,” he said.