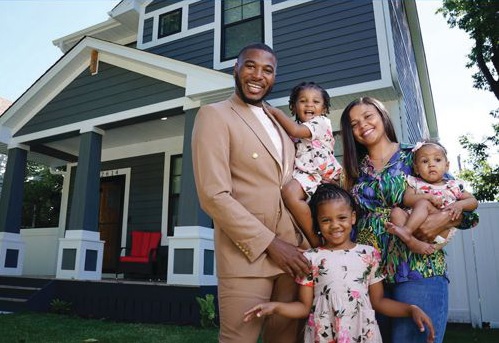 Homeownership for many is the American dream, but for too many Blacks it has become an American nightmare. The National Association of Real Estate Brokers, Inc., (NAREB) released the 2020 edition of its State of Housing in Black America (SHIBA) report Oct. 27, with a stark warning: Without major changes in public policy, restructured mortgage lending criteria, increased down payment assistance, and an extended forbearance period needed by Black homeowners experiencing severe financial burdens resulting from the pandemic, Black American homeownership will continue to lag and wealth building plans will remain delayed, severely diminished, or simply out of reach.

“Statistics oftentimes can be ignored or tabled. However, when the story is told through the eyes of young, Black Americans experiencing the rigors of trying to purchase a home for a growing family, you clearly see that structural and institutional remedies are necessary,” said Donnell Williams, president of the National Association of Real Estate Brokers. “This year’s SHIBA report lays bare the difficulties.”

Dr. Vanessa Gail Perry, MBA and professor of marketing, strategic management, and public policy, at George Washington University’s School of Business, is the principal author of the SHIBA report. She found that:

“According to Freddie Mac (The Federal Home Loan Mortgage Corporation), there are three million Black home buyers that are what they call ‘mortgage ready.’ That is, they have the income and the credit history and other financial characteristics to be able to qualify for a mortgage,” Dr. Perry told the virtual audience at NAREB’s 2nd Annual National Conversation on Black Homeownership when the SHIBA report was released.
“We have to keep reminding ourselves why homeownership is so important. It’s the key to wealth accumulation. Due to differences in home values and costs, the wealth accumulated by White households,” she explained, “far exceeds the wealth accumulated by Black households.”

Why such a disparity? “These patterns are manifestations of systemic racism and disadvantage that has accumulated over generations. This affects Black homebuyers in all three criteria areas from mortgage lending capacity, to credit history and collateral,” Dr. Perry said.

The Rev. Dr. Freddie Hayes of Friendship West Baptist Church in Dallas addressed the federal government’s role in creating the systemic racism Black families experience today. He contends there can be no solution without dealing with the federal policies that caused the racial discrimination from redlining (refuse a loan or insurance to someone because they live in an area deemed to be a poor financial risk), to the homestead grants, to the early FHA loans for Whites only to higher interest rates for Blacks.

“It was public policy that set the stage for the disparity that exists right now not only in terms of the wealth Gap but also in terms of the housing gaps,” he explained. “Through public policy certain persons were privileged and others were underprivileged. It’s going to be necessary for there to be public policy that again targets those who have been targeted for abuse, targeted for being left behind and ensure that they have an opportunity,” Dr. Hayes continued.

“This is a classic case of how systemic racism has contributed to the wickedly widening wealth gap that exists in this nation. That’s number one. The second thing I would say along with targeting through public policy those who have been disadvantaged, I would also say it’s going to be important to target through public policy the current expressions of racism that continue to exist when it comes to our efforts to secure public policy.”

He added, “I’ve seen this with members of our church. I’ve experienced it myself. There are appraisers who take it upon themselves to deflate the cost of the value of homes on the side of town where most of us live.”
Systemic racism is not just something that is the result of what has been happening in the past but it is a result of what is going on even right now, he concluded.

The report also found that:

The SHIBA report also includes recommendations designed to support Black homeownership and to maintain homes if they already own.

“There are solutions.  There are public and private sector remedies,” Mr. Williams said. “NAREB continues to advocate and push the envelope by heightening awareness in all sectors that homeownership not only increases the wealth building capacity of Black Americans, but also serves to strengthen the nation’s and communities’ economic outlook.”

Marc Morial, National Urban League president, said that Black Americans must be just as intentional in reclaiming our “piece of the dirt” that has been denied to Black Americans since the Reconstruction era.

Former NFL player Ray Crockett urged the audience to “buy the house before the car … get your credit right … and understand what you value.”

Rental Kharma spokesperson Lynne Poole remarked that Black renters with “thin” credit profiles need to use non-traditional digital platforms like Rental Kharma that report rental payments, which are not typically counted in developing a favorable credit rating. To download a copy of the “2020 State of Housing in Black America: Challenges Facing Black Homeowners and Homebuyers During the COVID-19 Pandemic and an Agenda for Public Policy,” visit, www.nareb.com/shiba-report/