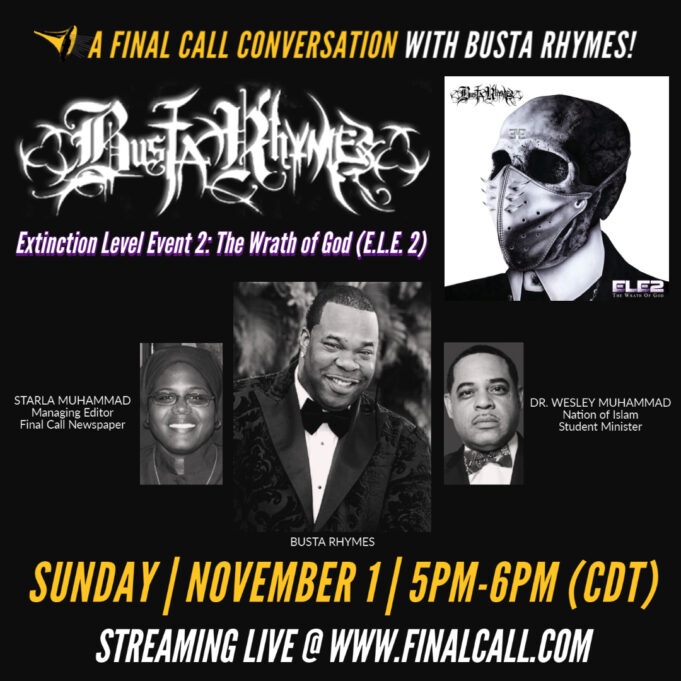 Starla Muhammad, The Final Call newspaper’s managing editor, and Dr. Wesley Muhammad an author, scholar, and Nation of Islam student minister, sat down with Busta Rhymes about his vision and thought process for the album. The interview was live streamed on www.finalcall.com.

The album started coming together after he had a meeting with Minister Farrakhan in Los Angeles. During his interview with The Final Call, Busta Rhymes said he had always wanted to meet the Minister, and television personality and film producer Daphne Wayans called him up one day.

“I need you to be at this location. I’m with the Minister right now,” she said. At some point in time after the meeting, as he was working on the album, he felt like he wasn’t doing the track on The Wrath of God justice. He ended up revising the song based off of an excerpt of the Minister on the Rock Newman show.

“It was doing something else to me. I couldn’t even describe it. I’ve never seen a man on this earth talk like that,” he said. “I wanted to make sure that I was being a little mindful on how this would affect people. … It’s not regular talk.”

Min. Farrakhan gave Busta Rhymes his blessing to use the excerpt on the track.

Busta Rhymes commented on how the song was meant to be disruptive. The album is made up of 22 tracks. After the intro, it starts off with “The Purge,” which talks about injustice and protests going on in the country. The Wrath of God song featuring Minister Farrakhan is the sixth track. In his verse, Busta Rhymes goes deeper into the idea of injustice, corruption and God’s wrath in the form of natural disasters.

He talked about the feedback he’s been getting from people who love the Minister.

He critiqued the culture of rap and hip-hop today and warned young rappers to “stop acting like every choice doesn’t come with an invoice.” A large part of the album was bringing back the fundamentals of hip-hop, which he said was courageousness and having something with substance.

“I just wanted to give people an incredible balance of the science and just the traditional hot, fire music,” he said.

Busta Rhymes has six children, three sons and three daughters. During the interview, he talked about how he’s on good terms with them and was honest in expressing how he still has to fix an issue with one of his sons. But he’s had conversations with them about what he wanted to share on the album, and he received their blessing. He teared up during the interview.

“My kids, they’re so proud of me right now, what I’m doing with this album, the phone calls they’re getting from their friends,” he said. “They have not heard the conversation be as fluent about their father, because I haven’t put out an album in 11 years.”

He talked about a moment when his children had their friends over, and they were talking about their favorite rappers. “I’m sitting right there and they ain’t mention me,” he said. But he said the album brings back his era of music.

“To hear the love and the appreciation that my kids are giving me because they love what the album sounds like, it superseded their level of expectation and their friends are wilding out,” he said.

“We come out the store and the gods would be there” speaking facts like how far the sun is, he expressed. “I’m like, these are the transformers in real life!”

“I just felt like it was a duty,” Busta Rhymes said. He explained how he always had a problem with Black History Month, because one, they made it the shortest month out of the year, and two, because they bring up the same people.

“He done came over here, went to Detroit. Sold silks. Taught the people. Gave birth to … the Honorable Elijah Muhammad,” he said. “Gave birth to a Nation, a powerful Nation, that also gave birth to Clarence 13X, and in turn, he gave birth to the Five-Percent Nation. So the whole thing was a domino effect from Master Fard.”

When asked by Starla Muhammad if he ever considered working on a project with other hip-hop artists who are Five-Percenters and members of the Nation of Islam with the idea of spreading more of what they know of Islam, knowledge of self and the teachings, Busta said he would love the idea of doing that with Rakim, Wu-Tang Clan, Poor Righteous Teachers, Brand Nubian, Jay Electronica and others to produce a project based on their collective knowledge. Extinction Level Event 2: The Wrath of God is available now on all streaming platforms. To view A Final Call Conversation With Busta Rhymes, visit www.finalcall.com.