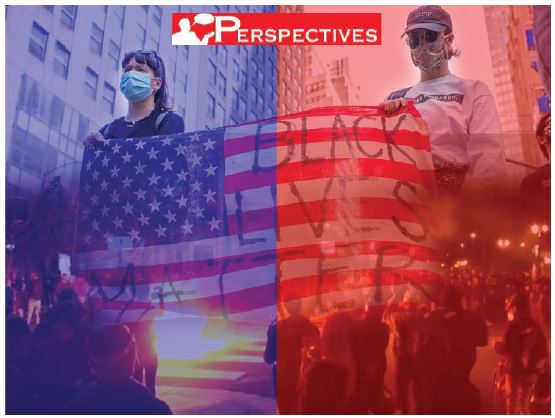 “Don’t try to hide. You might as well embrace it/you’ve done it all/turn around and face it.” Run and Hide—Jay Electronica

Bob Whitman was incensed. While pouring his morning coffee he happened to take a quick glance at his son Billy’s homework assignment where his teacher had quoted, “because of the deep rooted prejudices of Whites and the 10 thousand recollections of Blacks a division would remain …which will probably never end but in the extermination of one or the other race.”  He immediately emailed Billy’s principal, Dr. Assata Jackson, that the racist ramblings of Black militants being used to teach his child would not be tolerated! However, he dropped his coffee mug when Dr. Jackson replied, “umh..that was Thomas Jefferson, sir” with a smiley face emoji to punctuate her sarcasm. ….

If the protests of 2020 have taught us anything it is there is a fear in White America that we are on the verge of an apocalyptic  race war where hordes of Black ruffians will commence slaughtering innocent White people, indiscriminately.

Not only is this sentiment insulting to African Americans, it also is a false narrative that has often been repeated over the last several months.

The anxiety of White folk can be understood, so I get it.  After 400 years of systematic oppression, who wouldn’t want a little payback? So, when they hear about rioters tearing up cities, their first impulse is to think that the late Soul Brother Number One James Brown’s “The Big Payback” record had been remixed for 2020. But that does not gel with the reality of the times. Truth is, many of the rioters in these cities are White kids.

There were reports last summer that many of the protests following the murder of George Floyd have been made up of predominately Caucasians. After the Breonna Taylor riots last September, the mayors of two North Carolina cities openly blamed White anarchists for hijacking the racial justice movement.

This is not to say that Black people have not risen to fight the power when necessary.

Historically, there have been many instances of Black rebellion including the Nat Turner uprising of 1831. Historian Herbert Aptheker states  in his book, American Negro Slave Revolts, that there were over 200 slave rebellions, but the newspapers and politicians suppressed the information because they feared that the truth about the  rebellions would spread fear among Whites and encourage more rebellions amongst Blacks.

In his work Urban Racial Violence in the Twentieth Century, Joseph Boskin chronicles how, in Tulsa, Oklahoma, and other cities,  Black folk did not just lay down and die but fought back, valiantly, against the oppressor but were outnumbered and overpowered by the might of racists backed by the U.S. government.

So, it is clear that Black folks ain’t scared to throw them hands when necessary. As Lerone Bennett, Jr. wrote in, Confrontation Black and White, “the concept of confrontation; the idea of  forcing men to confront the gap between word and deed, promise and performance has always been a key element in Negro History.”

But in 2020, what America is really seeing is a civil war between conservative and liberal White folk and African Americans are just being used as a raison d’etre.

But the fact that what is happening in America is largely White-on-White violence is conveniently missed by network talking heads who are always in search of a big, Black boogey man to place all the ills of America on his shoulders.

Let us be clear. The media is bent on finding a Black equivalent to match the White supremacy that is running rampant in this country today. A prime example is a recent Fox News story that, unjustly, featured the Honorable Minister Louis Farrakhan in a picture alongside the likes of White supremacist Richard Spencer  and even OJ Simpson thrown in, for good measure, to fan the flames of fear in White America.

However, history has taught us that any “race war” that starts will be instigated by White supremacists determined to “Make America Great Again” not those who are most deserving of the long arm of Justice layin’ a smackdown on somebody.

See, White supremacy is a sophisticated global system.  And no matter how much we might want to pin racism on some uneducated, “yahoos” from the backwoods, the reality is, the architects of White supremacy are highly educated. Carl T. Rowan in his book, The Coming Race War in America, points out that the author of the right-wing militia “bible,” The Turner Diaries, “Andrew Macdonald” was not some high school dropout forced to work at his daddy’s gas station but a former physics professor named William Pierce. And it takes brains to fool a whole country into thinking that the current turmoil is about African Americans fightin’ to get a piece of the American pie when neither the White conservatives nor liberals plan on leaving us a crumb.

So, Black folks can’t get caught up in a White family feud over who’s gonna take home the leftovers when we weren’t even invited to the picnic.

Minister Paul Scott is founder of the Black Messiah Movement based in Durham NC.  He can be reached at (919) 972-8305. His website is BlackMessiahMovment.com.