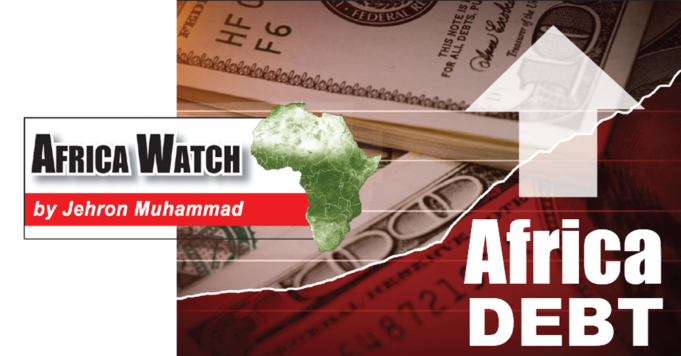 The sanctions concept has been around a long time. According to Foreign Policy global news publication, sanctions have a long history of use by nation states blockading their enemies, or by those that have come under the sway of Western imperialist powers. A case can be made, that for Africans and Africans of the Diaspora this form of exploitation began with the Congo and the Republic of Haiti respectively.

A form of sanctions was commissioned by King Joao III of Portugal around 1526 after receiving repeated requests in letters by Congo’s Christian converted King Affonso that he end the capture and selling of his subjects into slavery. Discovering that King Affonso had begun sending emissaries to the Vatican to appeal to the Pope, the Portuguese king set up a blockade to prevent such a meeting from taking place.

The most egregious sanctions issued against persons of African heritage was used against the new Republic of Haiti. After winning its independence in 1804 France insisted a blockade be established that included other Western nations, including the U.S. The sanctions or embargo would stay in place until Haiti paid France for the plantations it expropriated during the war of independence and pay France the cost of going to war.

Said to compel a change in behavior sanctions have morphed into targeted or “smart” sanctions measures such as arms embargoes, asset freezes, and travel bans on key individuals and organizations.

According to the United Nations publication ourworld.unu.edu: “It could be argued that sanctions are a key element of the ‘do something’ strategy of international crisis management. The imposition of a sanction signals to countries that something is being done. It can also be argued that sanctions attach a stigma to the sanctioned actor and, in so doing, subtly changing a country’s internal dynamics or altering the balance of on-going negotiations. These justifications aside, the simple truth remains sanctions regimes do not really work, or at least not very well.”

There are generally two reasons why this is the case. First, sanctions are often not a viable option, due to characteristics of the situation or attitudes of the sanctioned actors. Second, the sanctions themselves are not properly enforced. Third, sanctions are almost never enforced on Western powers, the global North’s corporate interest, individuals and their laundry list of catalogued atrocities and illicit business practices committed against Third World nations.

Cases in recent history include Libya and Sudan. A principle reason the U.S. sanctioned Sudan and designated it a “terrorist state” was because of its relationship with Osama bin Laden. Bin Laden had been living and doing business in Sudan.

According to Manor Ijaz, a member of the Council on Foreign Relations and chair of a New York based investment firm, President Bill Clinton and his national security team ignored opportunities to capture the alleged terrorist.

Ijaz wrote in the 2001 Los Angeles Times, in a piece titled, “Clinton Let Bin Laden Slip Away and Metastasize,” that between 1996 and 1998 he opened unofficial channels between Sudan and the Clinton administration. He wrote that “President Omar Hassan Ahmed Bashir … wanted terrorism sanctions against Sudan lifted, offered to arrest and extradition of Bin Laden, (along with) detailed intelligence data. …”

Why the U.S. or the Saudis failed to take Bin Laden is a mystery. Instead, Ijaz said in 1996 that Sudan, responding to U.S. pressure, asked Bin Laden to leave. From Sudan he leaves and moves to Afghanistan. Why after all these years Sudan has retained the terrorist state designation might have more to do with being majority Black and Muslim and tied to the South’s significant oil revenues and strategically situated, then an actual terrorist state. When had U.S. being in bed with an autocrat like Al Bashir ever been an issue?

The tragic bombing of the Pan Am Flight 103 over Lockerbie, Scotland, that ended with 270 dead made it the “deadliest terrorist attack ever to hit the U.K.” After years of investigation two Libyan nationals were indicted. One of those Abdelbaset al-Megrahi was the only person ever convicted. But according to The Independent “many people, including some relatives of the 270 who died, believe him to have been innocent.”

Jim Swire, father of one of the victims named Flora came away from the trial, along with others, convinced that the Libyan was innocent. Many others including family members saw gaping holes in the prosecution and went away believing that a hideous injustice was done to Mr. Megrahi, who died of cancer in 2012 still proclaiming his innocence.

The fact that Libya paid out $2.7 billion to family members and Sudan is in the process of paying out $335 million to the family of victims as compensation for crimes there isn’t conclusive evidence against either country shows the fallacy of sanctions as a viable option.

Tripoli’s payment was based on the lifting of UN and U.S. sanctions. Libya was also removed from Washington’s list of nations which allegedly support “terrorism.”

U.S. President Donald Trump said he agreed to remove Sudan from a list of sponsors of terrorism in exchange for Khartoum paying millions of dollars in compensation to U.S. terror victims and families.

In a Oct. 19 tweet he wrote: “Great news! New government of Sudan, which is making great progress, agreed to pay $335m to US terror victims and families.” “Once deposited, I will lift Sudan from the State Sponsors of Terrorism list. At long last, justice for the American people and [a] big step for Sudan!” Mr. Trump tweeted.

Where is the $335 million coming from? Unlike Libya, which under Muammar Gadhafi had unlimited oil wealth from which to draw from, Sudan is more than $60 billion in foreign debt. And this is without mentioning the current and future economic effects of the pandemic. Sudan’s prime minister did say getting off the terrorism list would help his government benefit from debt relief and access foreign loans and investment.

Sanctions like initiatives championed by the International Criminal Court (ICC) and many of the United Nations initiatives are geared toward Africa. A case in point: in 2018 over 50 percent of the UN Security Council meetings, 60 percent of its outcome documents, and 70 percent of its resolutions with Chapter VII mandates concerned African peace and security issues. That I guess makes sense since Africa is responsible for much of the world’s natural and mineral resources.

As anti-money laundering expert for Africa Hilary Mossberg said in a piece titled: “A Better Way to Use Sanctions In Africa,” sanctions are generally the West “default response” when a crisis erupts. Mossberg, who has a graduate degree from the U.S. International University in Nairobi, Kenya, wrote: “Few things are a constitutive of the Western foreign policy orthodoxy toward Africa as sanctions. Sanctions programs abound in the continent, yet they frequently fall short of their goals.” Follow @JehronMuhammad on Twitter