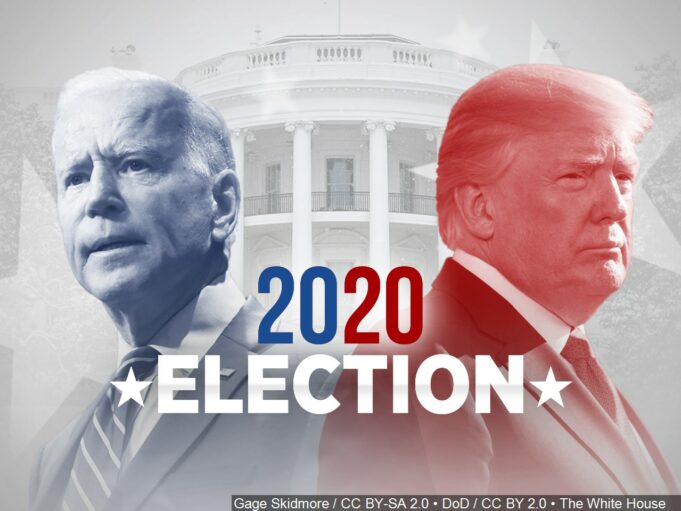 WASHINGTON—The United States has entered the final stage of the 2020 election process and voters—particularly Black voters—are demonstrating in overwhelming numbers that the outcome is important to them. After just the first week of early voting, an unprecedented 22 million people had endured long lines to cast early ballots, according to Sen. Amy Klobuchar (D-Minn.) who spoke to reporters Oct. 18.

Senators Klobuchar, Bernie Sanders (I-Vt.), Tammy Duckworth (D-Ill.), and Charles Schumer (D-N.Y.) insisted that despite claims to the contrary by President Donald J. Trump, the voting process is free and fair. Mr. Trump has falsely claimed repeatedly that the voting system is rigged, unless he wins the election; and that he may not accept the results if he is not declared the winner.

“Almost everybody in America now knows that Donald Trump lies a lot,” Sen. Sanders said. “And one of the worst lies that he is spreading is that there is a massive amount of voter fraud in this country.

“Let me quote a recent statement from Benjamin Ginsberg,” Sen. Sanders continued, “one of the leading Republican experts on elections, a man who served as the national counsel for the Bush-Cheney presidential campaign. Quote ‘The truth is that after decades of looking for illegal voting, there was no proof of widespread fraud. At most. There are isolated incidents by both Democrats and Republicans. Elections are not rigged.’ End quote. This is the leading Republican expert on elections.”

In the face of the coronavirus pandemic, mail-in voting, and early voting measures can be trusted, he said. “The bottom line here, the American people should not have to risk their health or their lives in order to vote. And that is why so many millions of people are voting to mail in ballots.”

“I think we’re witnessing a recognition by people that regardless of the efforts by the Republicans to voter suppress their way to victory, that people are not going to take it,” Dr. Clarence Lusane, professor of political science at Howard University told The Final Call. “The danger that people are facing, this is a tremendous motivator. And so, I think we’re going to see a massive turnout, probably largest election turnout in U.S. history.

“I think there’s such an urgency felt by people in the country and particularly African Americans, but also we see it with women. We see it with seniors. We see it with other demographics that they want a new administration and likely a new Congress,” he continued. “So, it’s not only Donald Trump in trouble. But the Republicans in Congress and probably in a lot of state houses all around the country.”

This rising tide against the Trump administration and the deteriorating status quo caused by the pandemic and the resulting economic collapse are occurring in the face of aggressive behavior on the part of the president, in defiance of what have been widely accepted political norms.

After being diagnosed with, hospitalized for, and treated with experimental drugs for Covid-19, for example, Mr. Trump balked at the bi-partisan commission on presidential debates changing the format to a virtual one, deciding to balk the debate Oct. 15. One more in-person debate is scheduled for Oct. 22.

Democratic nominee Joe Biden, who was willing to participate in the virtual debate then scheduled a town hall meeting on ABC during the originally scheduled time. Then, true to form, Mr. Trump inserted himself into the picture with his own in-person town hall on NBC.

Mr. Biden’s session was calm and provided him a chance to be seen discussing the campaign issues without the blustery interruptions from Mr. Trump which disrupted their first encounter. Mr. Trump’s town hall, however, was a typical Trump performance, riddled with what fact checkers called: “misleading,” “false descriptions,” “fantasy,” “false” statements, “hallucinations,” and outright “whoppers.”

“Dishonesty that has been a mark of the Trump administration,” said Dr. Lusane. “We really haven’t had a debate in the traditional way in which the two presidential candidates sit down or stand up and present their side of the argument.

“The first one was an absolute disaster and then the town hall, was a very clear contrast, one with a candidate who presented a serious enunciation of his views. And you could agree with them or not, they were an effort at talking about policy and leadership. And then you had another candidate (Mr. Trump) who appropriately was defensive because he was challenged on all of his mendacity.”

Mr. Trump reportedly made at least eight false or misleading statements according to the Washington Post fact-checker, which incidentally issued a tally of more than 20,000 falsehoods by Mr. Trump since he took office.

Most of his exaggerations had to do with what’s perceived as his poor performance handling the Covid-19 crisis, but he also made misleading comments about the election and ballot security, the newspaper said.

“Thousands of ballots dumped in a garbage can, and they happen to have my name on it,” Mr. Trump said in his town hall. “This is a hallucination,” the newspaper reported. “Remember: Trump has spent much of 2020 peddling absurd falsehoods about voting by mail, and he has been claiming without any basis that rampant election fraud is afoot.

“The case Trump is referring to, from Pennsylvania, involves nine ballots, seven of which were for Trump, not ‘thousands.’ The president has been aided in his efforts by the Justice Department’s irregular disclosures and its violation of ballot secrecy in this case.”

NBC News’s Savannah Guthrie, who hosted the town hall went toe-to-toe with the president, giving him one of the most aggressive interviews he’s experienced as president. Ms. Guthrie pressed the president on his Covid-19 diagnosis, his last negative test, his personal dislike for masks and the conspiracy group QAnon, pressing him and not letting him evade answering.

The NBC News journalist asked Mr. Trump about his retweet of a conspiracy theory that Mr. Biden orchestrated to have Seal Team 6 cover up the fake death of Osama Bin Laden. “That was a retweet,” Mr. Trump replied. “That was an opinion of somebody, and that was a retweet. I’ll put it out there, people can decide for themselves, I don’t take a position,” he said.

“I don’t get that,” Ms. Guthrie countered. “You’re the president—you’re not like someone’s crazy uncle who can just retweet whatever!” Mr. Trump is also criticized widely for his opposition to the Affordable Care Act, and his failure to offer his own proposal to replace it.

“The Trump administration has been trying for years to dismantle the Affordable Care Act, the law mandating that insurers must sell coverage plans to people with preexisting health conditions. The entire Affordable Care Act would cease to exist, jeopardizing health care for millions of Americans during a deadly pandemic, if a Republican lawsuit currently before the Supreme Court were to succeed,” the newspaper said.

And the president touted his so-called “Platinum Plan” to uplift Black people in this country. “I have done more for the African American community than any president since Abraham Lincoln,” Mr. Trump said, repeating an assertion he often makes. He claimed he has provided record funding for Historically Black Colleges and Universities (HBCUs); a bill he signed to overhaul prison sentences; and what he claimed are increased investments in minority communities through “opportunity zone” legislation.

“Prominent historians have dismissed Mr. Trump’s claim as fantasy,” the newspaper said. Mr. Trump’s record is more in line with that of segregationist president Woodrow Wilson, who also presided during the 1918-1920 flu pandemic, and a period when racist vigilante attacks against Black communities in Tulsa, Oklahoma, Greenwood, Florida and elsewhere happened.

“The election is well underway,” Sen. Klobuchar told reporters Oct. 18, “and Americans are voting in droves because they know what is at stake. We must do everything we can to protect the right to vote, and uphold the integrity of the election process. That means pushing back on President Trump’s lies about mail-in ballots and his efforts to sow chaos.

“It also means making sure that Americans know that a record number of people are voting by mail this year, which could slow the reporting in some states. We should be prepared to reject misinformation and be patient about results in places where counting ballots may take longer. Americans should keep making their voices heard at the ballot box, the earlier the better,” she said.