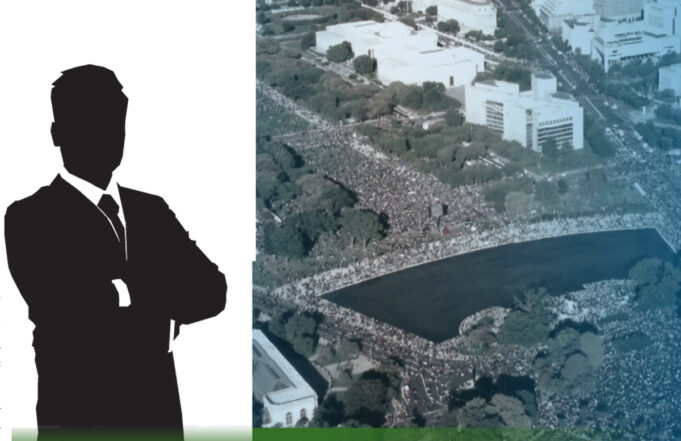 In commemoration of the twenty-fifth anniversary of the Holy Day of Atonement of the historic Million Man March on October 16, 1995, organizations and individuals across America hosted live events and, due to the Covid-19 pandemic, held virtual forums.

It was a weekend of remembrance from Friday, Oct. 16 through Monday, Oct. 19. Some two million men answered the call of Nation of Islam Minister Louis Farrakhan to gather, atone, first to God, reconcile their differences with each other and to take responsibility for their families and actions.

After growing up on the streets of New Orleans in a life of crime and drugs, Roosevelt Muhammad, now a member of the Nation of Islam, struggled before the Million Man March. More struggles to survive came after the March with the devastation of Hurricane Katrina.

Like many youngsters, crime once seemed his only option to survive the streets of New Orleans.

The March played a major role in inspiring him to change and help others change. After the March, he founded the Young Professionals Movement in New Orleans, an entrepreneur club for boys and girls.

Before he came to the Nation as a 23 year old, he was illiterate, unable to read or write. He said he was involved heavily in the city’s drug trade.

But over two years, men in the Nation taught him to read. “I remember brother Minister Harold (Muhammad) giving me a cassette tape of the Minister Farrakhan saying to marry the dictionary. So, I did and I studied Minister Farrakhan’s study guides for two years prior to the March,” he continued. “I know what our youth are going through out here. So, I was inspired to help them and do something for them, that’s why I started the boys and girls club.”

He also felt obligated to go back home from the March to undo death and destruction he helped create. “After taking the pledge given by the Honorable Minister Farrakhan at the March, it is what has kept my spirit going. It gave birth to our youth program, and it wouldn’t exist without the March and it’s been in existence ever since the March. I dedicated 25 years to that,” he added. The pledge included a promise to rebuild themselves, their families, and communities. As well as respect and protect women and children, act as community and world builders and business leaders, and to curb and not commit violence against their brothers except in self-defense.

“I came into the Nation of Islam at 23 years old. I’m 50 years old, and the peace of the Honorable Elijah Muhammad is all I lean on, and it is all thanks to the March,” he said. “I was made a man in the Nation.”

So, every youngster that joins the youth club gets a copy of “Message to the Black Man,” by the Hon. Elijah Muhammad, patriarch of the Nation of Islam.

On Oct. 19, in honor of the March, Roosevelt Muhammad hosted an all-male meeting with the theme, “Real Men of New Orleans, Brothers Can We Talk?” Men who attended the March and others that were not able to go participated. Roosevelt Muhammad invited the men to celebrate the March anniversary and to recommit themselves to the pledge they took 25 years ago—or take the pledge today. Dinner was served after listening to an hour from Minister Farrakhan’s message at the Million Man March. Then the men read the pledge from the March, discussed its meaning and how it can be implemented now.

“I’m asking the brothers to commit, now it’s time to stick to the blueprint. All we need is about 1,000 brothers to agree to buy just basic products from our youth. Toilet paper, lotion, and soap at wholesale. These are the products that our youth distribute every week throughout the city of New Orleans,” he said.

In 2005, ten years after the Million Man March, there came pain and loss after Hurricane Katrina hit the Gulf of Mexico and swept through New Orleans. “Hurricane Katrina wiped out my whole business, and the government didn’t help me with anything. The only person that helped me was Minister Farrakhan who sent me $10,000 to get everything I had lost. That’s why every student that comes into this program must know this man; I’m nothing without him. They would not even have me as a man to teach them anything if it wasn’t for the Minister,” he said.

“I give a business to every youth that joins our club. To go door-to-door to get 100 Life Links. A Life Link is an individual who has agreed to spend $5 a week or $10 a month, with a young person, which guarantees them being productive and responsible,” he said. “All youngsters in our club have to have 100 Life Links, and with that, it’s a guaranteed $1,000 circulation through their hands a month.” He said the Life Link program was inspired by Minister Farrakhan’s Exodus Program, years ago, built on a similar concept. “So, everything that I do with my youth and our organization is the blueprint of everything that Minister Farrakhan advised me to do,” he said.