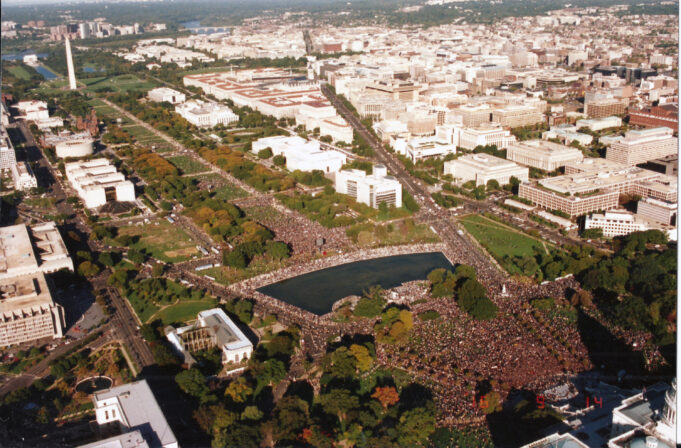 Visual of More than a Million Black men on D.C. Mall Speaks for itself

There are two distinct memories etched in my mind about the Million Man March that are seldom talked about. In fact, there are many unspoken aspects of the March that are rarely focused on that have impacted people throughout the world.

The peaceful gathering of nearly two million descendants of slaves for a demonstration of self-reliance and a return to Allah (God) was a sign of significant change in Black America, change that the enemies of the rise of Black men and women in this country could not let go unchecked.

The assembly really wasn’t a march as much as it was a physical and spiritual journey. Every Black man who attended had to take it upon himself to commit to a challenge—to expend time and money to be in Washington on a Monday and it’s not a vacation—and then commit to return home and take control of their homes and communities.

I walked out of a trailer set on the Mall for credentialing journalists just prior to sunrise. I exclaimed “Allahu Akbar” as I approached the staging area from afar to find that the Mall was already filled beyond the Ulysses S. Grant Memorial with Black men. So much so that the walkways behind the Memorial and areas on all sides were so full that the only way to the stage was through the crowd.

In my FOI uniform, I tried to squeeze past brother after brother, saying excuse me as I pushed through what could be compared to walking through a jar of jam. Suddenly, a brother shouted, the minister needs to get to the front.

I was not a minister, but that was when the brothers physically lifted me above their shoulders and passed me along letting me down on the front stage next to the CNN platform that was being finalized to broadcast the event from start to finish.

But the two events that have stuck with me is the reaction of our NOI leadership to the lie that the audience size was 400,000. Even the massive crowd hissed and booed as the U.S. Park Service crowd estimate was announced over the loudspeaker.

“They deliberately announced an undercount of the march, which was a slap in the face of all the Black men who came to D.C. on their own dime,” Leonard F. Muhammad, former NOI chief of staff told me. “The figure was an attempt to rob Minister Louis Farrakhan and the men of their accomplishment. Since we had been meeting with the Capitol people … we knew some of the people we should approach.”

“We were prepared to file a lawsuit against them on the scientific basis of their effort. As a result, the U.S. Park Service officially stopped estimating crowd sizes of Mall events,” added NOI general counsel Abdul Arif Muhammad.”

Indeed, it was a distinctive moment in history. A Black Muslim organization was challenging government officials—whose policies for so long denied Black people justice—for a fair count of a crowd size as not to deny Black men from being recognized for their sacrifice and commitment.

I recall officials of the NOI in a room with Capitol officials and being asked to stand in a square grid to determine how many people could fit in a certain area. Our Nation engaged a Boston University scientist to estimate the actual crowd size, which came back as between 870,000 to 1.2 million. And that was just based on photos taken toward the end of the day and did not include men who could not be seen because of trees and other objects.

To allow the accuracy of the count to stand on such an historic day was akin to allowing Christopher Columbus to take credit for “discovering” America. Similarly, to allow corporate media to define our images allows for continuing of such lies about Black America.

What NOI leadership on that day demonstrated was a position that should have been taken when so much pressure from outside forces were put on leaders of the 1963 “March on Washington for Jobs and Justice” that our dear brother, the late Congressman John Lewis, was forced to change his speech at the last minute to appease march funders.

Those funders didn’t have the best-interest of those Black leaders then, just as the funders of the 1993 anniversary of the 1963 march had no vested interest in Black leaders who were forced to “disinvite” the Minister from speaking. In 1993, Rabbi David Saperstein threatened organizers with defunding the event if the Minister was allowed to speak.

The Million Man March was completely funded by Black America for Black America; therefore, no outside force could dictate the agenda. To his credit, the Honorable Minister Louis Farrakhan offered the march as a platform to some of those who disinvited him in 1993.

The other moment of note that no one knows about other than those who were there, was following the march Min. Farrakhan went on a World Friendship Tour to spread the message of atonement to African countries that have been put into ruins since the advent of the Trans-Atlantic Slave Trade. The colonial control and influence in those countries keep them at odds, when their unity could allow Africa to emerge as a developed continent by reclaiming their wealth to empower their own citizens—a thought that frightens the West to no end.

It was a moment in the Sudan when the delegation was meeting with head of state Omar al-Bashir and political leader Hasan Turabi. While watching a video of the march without volume, one of the Sudanese leaders exclaimed that “words need not be spoken” as he defined the magnitude of the gathering.

The mischaracterization of the tour by the government and the media continued to sow more seeds of division among Black leadership, when it was an opportunity for Black leaders to recognize the embrace from Africa for more relationships that are not mediated or defined by White corporate funders, philanthropists or political or religious groups.

The Most Honorable Elijah Muhammad stated that envy is one of our worst enemies. We in Black America—particularly leadership—must declare freedom first among ourselves so that when one of our stars rises, we realize it just makes the heavens brighter for all of us.

We must not let envy hinder us from adhering to the divine guidance coming through the Honorable Minister Farrakhan as we witness the unraveling of this great nation.