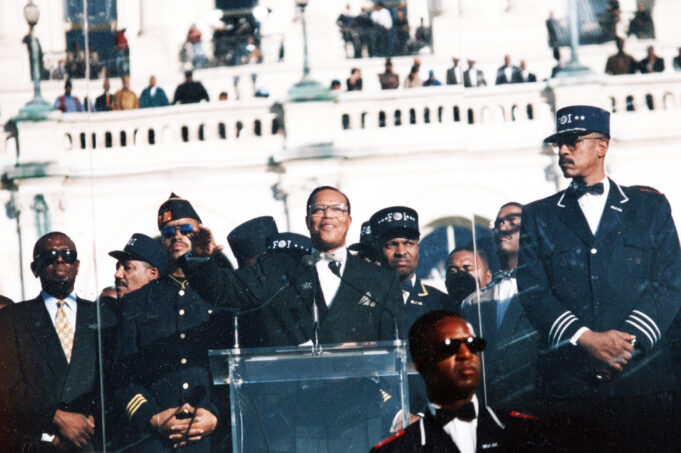 Leading up to the march, every city the Minister went into the FOI had to pass out flyers and put up posters. And go out in the streets and talk to the brothers and invite them out to hear the Minister. And during that process we were prepping the brothers about what the Minister wanted to talk to them about, the Million Man March. The mighty FOI hit the streets, that’s what they did; they had to get on the grounds. The Honorable Minister Farrakhan sent me in the city six months in advance in Washington to be on the ground.

The FOI was in every aspect of the march, we were there. We had to help organize the trucks and where they were going to park and we did all that kind of work. The mighty FOI worked on every leg of this endeavor. The FOI worked on getting the jumbotron under the direction and under Brother Ben Chavis because he was the point person in the city. And we would call call-outs all up and down the East Coast, thousands of brothers and from the Mid-Atlantic.

Then brothers from the fraternities would come and help us because the Phi Beta Sigma headquarters was headquarters for the Million Man March. Rev. Wilson at his church brothers would help us, the FOI. We were in the streets, in the trenches.  The FOI played a major part under the leadership of the Honorable Minister Louis Farrakhan, of course.

After the March, the 10,000 Fearless was formed to make the community a safe and decent place to live. The FOI continued to go out to the streets and spread the word with the mighty Final Call newspaper about the works of the Million Man March.

Also, the March had an impact on Black men in particular. They went back to their cities like the Minister said, they adopted Black children. Those men went back and started adopting Black families. Adoption was real low, that’s real all over the country. They don’t want you to know that but that’s the impact.

It had a major impact on crime.

Crime went down and they don’t want to give the credit to the Honorable Minister Louis Farrakhan and the Million Man March, but crime went down tremendously if you check it.

The impact on organizations increased, the churches, NAACP, check it.