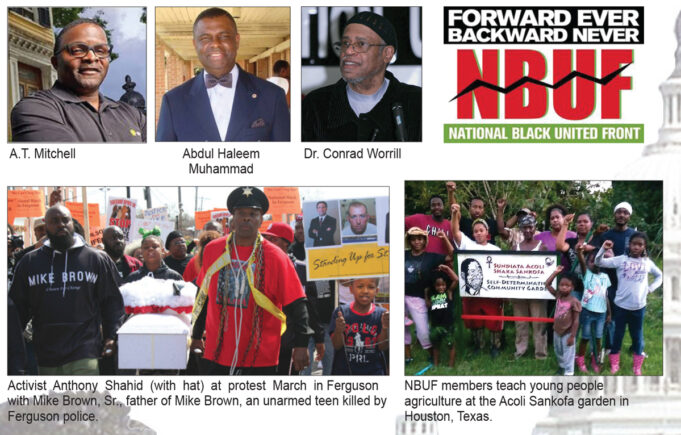 A.T. Mitchell wants just 500 good men from the five boroughs of New York to join him for the 25th anniversary celebration of the Million Man March sponsored by Man Up Inc., a Brooklyn-based anti-gun violence and community-based organization.

“I heard Minister Farrakhan loud and clear on October 16, 1995 when he said to go back into our communities and neighborhoods and join organizations and start organizations and to do the work that needed to be done. So, it was the spirit of being present for that and being a part of that that thrust me even more into doing the work that I do,” said Mr. Mitchell,

“Eventually, I founded this organization, and it is called Man Up, Inc,” he said. The organization is 16 years old and with a bevy of efforts promoting employment and expanded business opportunity, mentoring, and education and personal and community growth and development.

“We are advocates for the voiceless. We help youth get better prepared for opportunities in life. We mentor and have become one of the premier gun violence organizations in the nation,” said Mr. Mitchell.

Their work rests on Eight Pillars: Youth, which includes cultural and summer day camps, an after-school program, career and college prep. Community, which includes peacebuilding, gun violence awareness, and male and female development. Employment, which includes a job development center, work preparation program, business and entrepreneur training. Anti-Violence with a hospital responder program, anti-gang camp, and other programs. Fatherhood, which includes meetings relating to mothers, parenting, and male to male mentoring. Music and Arts, which includes performance and arts-related programming, and the Man Up! Radio podcast.

“We have been organizing for the last three months to commemorate the 25th anniversary of the Million Man March. The NOI and other grassroots organizations have been a part. We will be encouraging the men on that day to get back involved in the community and pick up their rightful place. We want to demonstrate that many Black men care and are willing to get involved. We want to revisit the spirit that was given to us on October 16th, 1995,” Mr. Mitchell said. The event will be held at Cadman Plaza Park in Brooklyn on Oct. 16th at 10 a.m. EDT.

Anthony Shahid in St. Louis has a long history of activism and is an enthusiastic lover and supporter of Min. Louis Farrakhan. He proudly recounts how St. Louis sold out planes, busses and nearly every rental car in the city to get to D.C. for the march. He is proud that the then-mayors of St. Louis and East St. Louis endorsed the March early and promoted it to others.

And his activism hasn’t slowed over the past 25 years as he connects the Million Man March of yesterday with the struggle called Black Lives Matter today.

He was in Ferguson, Mo., in 2014 after the killing of Mike Brown, Jr., by a White police officer. He aided the young man’s father, led protests, challenged politicians to their faces, shut down streets and highways and his chant, “Hand’s Up, Don’t Shot,” as witnesses say the unarmed Black teen had his hands in the air as the cop pumped bullets into his body, went global. He travels with Mike Brown, Sr., and supports those who have lost loved ones to violence, especially police violence.

The March was successful because at its core, it was a spiritual event, he said, sharing how he and others followed the instruction to fast before the great day in D.C.

“The Minister taught us about atonement and reconciliation. Then, he told us to go back home and apologize to the women for all of the things we had done wrong,” said Mr. Shahid. The Million Man March Pledge had the men commit to being community and world builders, responsible men, join a Black organization, join a place of worship, get involved in the Black struggle, respect women, protect children and be peaceful with one another. It represented the spirit of the March, said Mr. Shahid.

“You’ve got to think about how they’re trying to erase us out of history,” he said. “You know why? Because they purposely are trying to write us out of history because it was Black men, our women and children affected by the March. We answered the question, can Black men get together in a positive way without fighting and killing each other? Allah blessed us to show ‘yes’ we could. So pointing to the Million Man March, it should be something to study in every school history class.”

And, he remains his brother’s keeper.

Student Minister Abdul Haleem Muhammad, Southern Regional representative of the Nation of Islam, never let the Local Organizing Committee formed to make the March as a success go. He saw a harbinger of the March in April 1994, when he and Muhammad Mosque No. 45 brought the Minister to town to speak. In the end, the “Let Us Make Man” message was delivered at Pleasant Grove Missionary Baptist church, under the leadership of Rev. Charles L. Jackson, he said.

“The Houston Police Department estimated the crowd around the church as 35,000 men; they were all over the streets and the freeway. They were everywhere. And only 15,000 could fit in the building, and there wasn’t one fight or towed car. There wasn’t any pushing and shoving, and we had men stuck in every nook and cranny of the church,” said Mr. Muhammad. Minister Farrakhan’s message was broadcast live over radio station KYOK, and men who were strangers sat in cars listening to the broadcast. As the men stood in line at the church, women were outside cheering them on with posters, beating drums and tambourines, he recalled.

Since the March, he has completed his Ph.D. in Urban Planning, hosts a radio show and keeps collaborating with others in the battle for Black freedom, justice and equality.

“We have to revive that spirit of the Million Man March, but some of us never lost it,” said Min. Haleem Muhammad. “The Minister told me not to let the LOC die, and I never let my LOC (Local Organized Committee) die.”

“The National Black United Front (NBUF) played a major role in the organization of and mobilization for the Historic Million Man March.  NBUF chapters across the country spent many long hours working with various formations in the Local Organizing Committee structure. Additionally, a number of representatives of their organization contributed to the national planning both in Chicago and Washington, D.C.,” said Mr. Taharka.

“The day of the march was euphoric and gratifying to those like NBUF who really worked our tails off to make it a success. It is extremely important for the true history how this day came about be told, lest future generations think it happened with a blink of an eye. Brother Minister Farrakhan was the only person with the stature to make that call and get that diverse response. The power structure seeks to white out this gathering from the annals of history. Why? Because the messages and organizing wasn’t sanctioned by them. The Million Man March shows us what is possible when we push towards a common goal. The LOC format remains a viable organizing model in 2020,” he added.

Local Organizing Committees were groups formed in cities and towns to promote, support and build unity for the success of the March and Black progress. They were open regardless of political, religious or other affiliations as part of a wide coalition.

For Shahid Muslim, director of the Chicago-based Coalition for the Remembrance of Elijah Muhammad (CROE), telling the story of the March is core to what the archives and information center does. It broadcasts online and cable systems around the country carrying the message and history of the Hon. Elijah Muhammad, patriarch of the Nation of Islam. CROE also holds classes and screenings of rare videos and events at its headquarters on the city’s South Side.

Minister Farrakhan’s call and leadership was so powerful that some news channels refused to air it, he added. CROE, formed in 1987 by co-founders the late Munir Muhammad, Shahid Muslim and Halif Muhammad, seeks to fill the void and offer an independent Black voice. Munir Muhammad dedicated over 30 shows, as part of CROE’s television programming, to the Million Man March.

Some took to social media to share their appreciation for the Million Man March and its impact 25 years later. “I was in the military at this time,” wrote Walter Jackson. “Some of my brothers heard of Min. Farrakhan, and others haven’t. Prior to the MMM I would allow those who never heard of Min. Farrakhan listen to the cassettes I had onboard ship. After a year later, many would inquire more about Min. Farrakhan. Right before the MMM I was intrigued to see how many were brothers were able to defy their commanding officers not to participate and about 100 of us went anyways. After the Min. delivered his message at the MMM my brothers were active in doing great works in the Black community, and spreading the teachings of The Most Hon. Elijah Muhammad.”

Dinah Harris wrote on Facebook, “Day of Atonement: This is the origin of Black Lives Matter movement. Though the vision tarry it shall come to pass. The baby is born. I remember the birth all too well. I cried during the labor. I remember the climate. I witnessed nature saying, ‘this is my beloved child whom I am well pleased with.’ I remember my local publication ‘Unity In The Community’ birthed out of the spirit of the Million Man March.”

Others went back home and made life commitments, started businesses, scholarships and even became educators because of the word heard and their word given at the Million Man March.

“I came home with a mission to step up to be a better man to our women, and then proposed to my girlfriend who is now my wife of 23 years and counting,” said Hidden Scroll on Facebook.

Shuan Lovett posted, “I Was There Bro And Besides All The Celebrities That Was There!!! The Honorable Minister Louis Farrakhan Message Of Being Responsible For Your Actions And #Atonement Has Helped Me Navigate Life!!!! #APDTA.”

David Bass Dancy, shared on Facebook, “I made some strong spiritual connections that